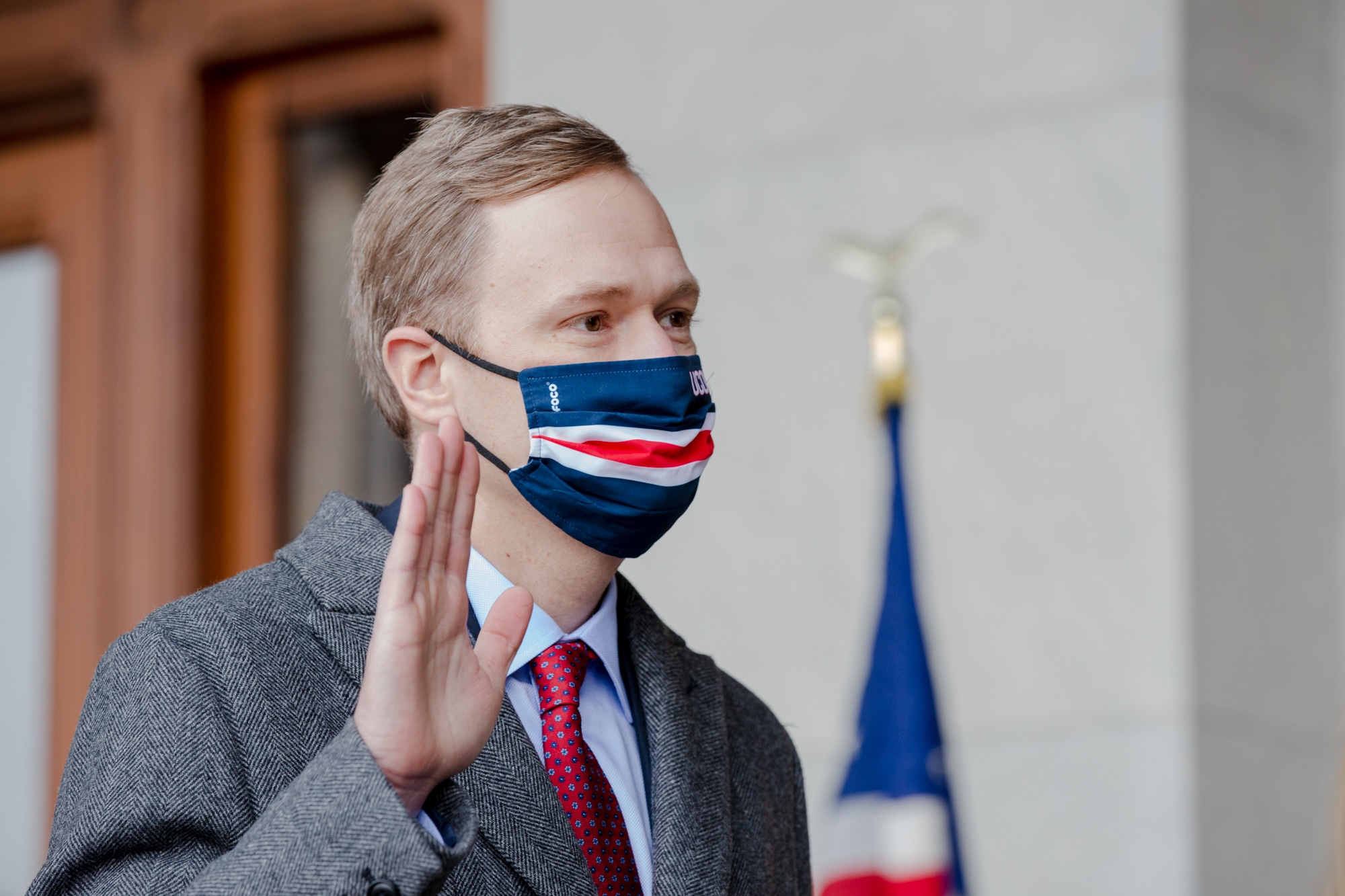 Matt Ritter being sworn in as a House Speaker outside the State Capitol.

The Connecticut General Assembly opened its 2021 session in extraordinary fashion Wednesday, taking the oath of office in two socially distanced ceremonies on the grounds of the state Capitol, applauded by friends and heckled by protesters.

On a day when the president of the United States was pressuring Congress to reject the votes of the American people, the leaders of the General Assembly were elected by acclamation, with minority Republicans pledging to help the majority Democrats make the session function.

COVID-19 was ever-present, the proximate cause for convening outdoors and one of the issues that brought protesters to the Capitol, demanding an end to the restrictions on social and commercial life.

Two older senators opted against attending, as a matter of caution. A third was home in quarantine after being exposed to the virus that has upended all aspects of life across the world and is blamed for more than 6,000 deaths in Connecticut.

Standing on a windblown blacktop on the south side of the Capitol, roughly in her assigned parking place, Secretary of the State Denise Merrill called the roll for the Senate, whose members were arrayed before her on folding chairs.

The House followed at the foot of the north steps of the Capitol, a spot overlooking Bushnell Park — and a long line of protesters standing behind barricades.

With Democrats winning majorities of 24-12 in the Senate and 97-54 in the House, there was no drama to the re-election of Senate President Pro Tem Martin M. Looney, D-New Haven, to a fourth term as leader, and the election of Rep. Matt Ritter, D-Hartford, as the new speaker.

Senate Minority Leader Kevin Kelly, R-Stratford, and House Minority Leader Vincent J. Candelora, R-North Branford, both new to their positions, each seconded the nomination of the two Democrats. The gesture routine in some years, not in others.

“We are facing a lot of hurdles with the issues and collateral damage has been caused by this pandemic. And we’ve seen a lot of unrest in our political system,” Candelora said. “And I am committed, along with this speaker, to make sure that we set a different course for the dialogue in politics, not just in Connecticut, but to set a tone nationally.”

Ritter and Candelora have a strong working relationship. Ritter was the House majority leader for the past four years, often negotiating the flow of business with Candelora, who had been the deputy minority leader over the same time.

Kelly’s ascent to leadership after the retirement of his predecessor, Len Fasano, was unexpected, and Kelly has acknowledged he has much to learn about his new role — and what levers of power and influence are available to the leader of a 12-member caucus.

Ritter’s election was a family affair. His father is one of his predecessors as speaker, Thomas D. Ritter, and his mother is Christine Keller, a justice of the Connecticut Supreme Court. His father administered the oath, then they hugged.

The new speaker is a political prodigy, elected to the Hartford City Council at age 25, the House at 28 and as its majority leader at 34.

In remarks later delivered in the House chamber to a small in-person audience and to representatives who listened from the offices in the adjacent Legislative Office Building, Ritter referred lightly to his long association with the institution.

“I can remember in 1993 sitting right there with my sister, Jessica, when Gov. [Lowell] Weicker was giving his address to the state of Connecticut. So, Gov. Weicker, I doubt you’re listening. But if you are, my sister, and I owe you an apology for our behavior that day,” Ritter said. “It’s a little overdue 28 years later, but I hope you know that we did not mean to interrupt your speech so many times.”

Succeeding Ritter as House majority leader is Rep. Jason Rojas, D-East Hartford, the grandson of a Puerto Rican migrant and the first person of color in the top rank of House leadership.

Rep. Jeff Currey, D-East Hartford, who underwent a kidney transplant Tuesday, was to be sworn in by Zoom from Hartford Hospital. Other House members were absent, due to caution or quarantine.

In the Senate, Sen. Dan Champagne, R-Vernon, was in quarantine after being exposed to COVID-19. Two Democrats, Norm Needleman of Essex and Marilyn Moore of Bridgeport, both in their 70s, opted against attending out of caution.

The protesters came with a broad variety of grievances, issues and vocal reach. They could be heard throughout the events but did not disrupt.

Sen. Paul Formica, R-East Lyme, said he welcomed the public participation. And on a day geared to bipartisanship, he said the GOP would have no hesitation to speak up.

“We have a smaller number, but we’re gonna work twice as hard. We’re gonna say no to some of the policies we don’t believe are in the best interest of the state of Connecticut,” Formica said. “But we’re gonna not only do that, we’re gonna offer solutions to what we think would be the best way to move us forward.”

They did not have to wait long for a partisan difference.

Some Republicans voted against the new rules. In the House, the vote was 118-23. Candelora, the House GOP leader, voted yes.