With a notable exception, Connecticut Republicans say Trump should accept his loss 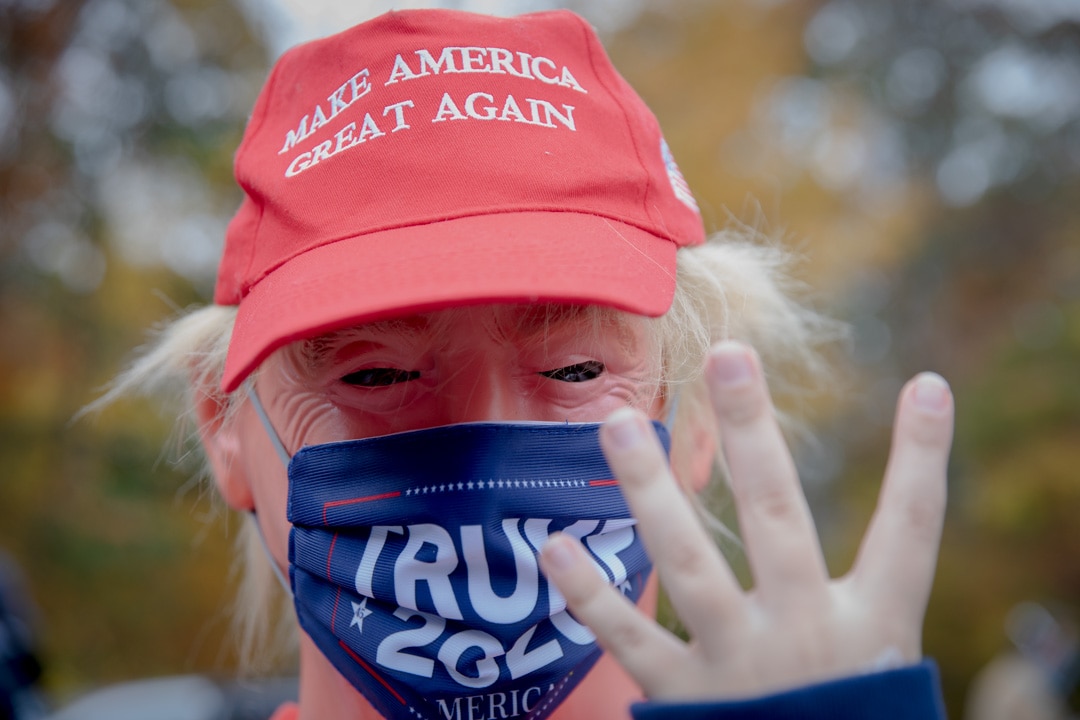 Joey Yuchniuk, 10, shows four fingers to support reelection of President Trump, wearing a Trump costume mask at a rally in October in Montville.

Donald J. Trump never has been a comfortable topic for Bob Stefanowski. Not during his time as the Republican nominee for governor in 2018. And not on Tuesday, when other Connecticut Republicans didn’t flinch at questions about the president’s furious efforts to stay in office.

Stefanowski, who is weighing a second run for governor in 2022, took a pass.

Stefanowski declined to say if he believed the president was right in asking Congress to set aside President-elect Joe Biden’s 7 million-vote victory, nor would he entertain questions about how Trump might continue to be a complicating factor for down-ballot Republicans after Jan. 20.

J.R. Romano, the state party chair, defended the president, without suggesting he had a right to remain in office. Two potential gubernatorial candidates, Themis Klarides and New Britain Mayor Erin Stewart, said the time is past for the president to accept his loss.

“It’s certainly troubling. And it doesn’t make any Republican’s job any easier,” Stewart said of the president’s extraordinary call for Congress to refuse to certify electors from swing states carried by Biden. “The election’s over. We’re done.”

Klarides, whose tenure as a state lawmaker ends Wednesday, said she had no objection to the president exhausting all reasonable avenues to confirm the accuracy of the vote, including the triple recount in Georgia and legal challenges in various courts.

But Trump has failed in nearly every legal venue, and the inauguration is two weeks away, she said.

Alex Plitsas, the Republican chair of Fairfield who may seek a leadership role on the Republican State Central Committee this spring, said if Congress is to consider rejecting any presidential elector, it must be on the basis of evidence.

“So far, the courts have rejected every case that’s been filed on the president’s behalf, citing a lack of evidence,” Plitsas said.

Romano said the president is doing nothing unusual.

“The  only difference is how the media is covering it,” Romano said. “What Donald Trump has done is what the Democrats have done for years.”

It is true that individual Democrats, such as Sen. Barbara Boxer of California in 2005, have challenged electoral votes, as some Republican senators intend to do Wednesday. A key difference is Boxer was not joined by John Kerry, the losing Democratic candidate, and her effort was a quiet footnote to the 2004 campaign.

This seems destined to be at least a chapter in U.S. presidential history.

During the 2018 campaign, Stefanowski steered clear of criticizing Trump, not unusual for a Republican trying to win a crowded primary.

He appeared to recoil from Trump’s comments in the infamous Access Hollywood tape that became public in October 2016. Trump could be heard boasting of being able to kiss or grope women without fear.

It was about that time that Stefanowski, who had not voted in years, changed his voter registration to Democrat. He never explained what prompted him to change his registration — then to not bother to vote. He remained a Democrat for nine months.

“It is what it is,” he said during the campaign.

Liz Kurantowicz, a Republican consultant, said GOP candidates must resign themselves to Trump remaining a key voice in politics.

“Anybody who was under the false impression the president was no longer going to be a part of American politics after Jan. 20, they bet wrong,” she said. “Donald Trump came into politics to be a disrupter. He has not lost his desire to be disruptive.”

Sen. Tom Cotton of Arkansas most likely would agree.

Cotton announced Sunday he would not join 13 other senators in rejecting presidential electors on Wednesday: “The Founders entrusted our elections chiefly to the states — not Congress. They entrusted the election of our president to the people, acting through the Electoral College — not Congress.”

Trump threatened Cotton on Twitter, suggesting he will pay a price: “Republicans have pluses & minuses, but one thing is sure, THEY NEVER FORGET!”

How can you certify an election when the numbers being certified are verifiably WRONG. You will see the real numbers tonight during my speech, but especially on JANUARY 6th. @SenTomCotton Republicans have pluses & minuses, but one thing is sure, THEY NEVER FORGET!

Cotton said there was no end game for Trump. And Connecticut Republicans had the same concern: Even if the Senate fell into line behind Trump, there was no way the House Democratic majority would join them.

“I’m just failing to see where we go from here or what they’re getting from doing this other than, you know, appeasing the voters who elected them, who are obviously upset with the results of the election as well,” Stewart said.

Stewart said she knows that some Republicans view recognizing Biden’s victory as betrayal. She offered Biden congratulations on Twitter and was quickly denounced.

“You would think that I committed treason,” Stewart said. “But the fact of the matter is that, you know, we’re almost two months later, and every court case has been rejected. … All of the accusations of voter fraud have been thrown out.”

On Saturday, Trump pressured Georgia officials to change the vote and add a sufficient number to give him a victory. The call was recorded, and the Washington Post obtained a copy on Sunday.

While some Republicans had been dismissing Trump’s efforts as keeping his base energized, the conversation was evidence that Trump was deadly serious.

On Monday, Sen. Chris Murphy, a Democrat, said he did not need the confirmation.

“I’ve been very confident that the president is incredibly sincere about his belief that the election results should be thrown out and he be allowed to remain president for four more years,” Murphy said. “My hope is that some Republicans who thought this was all bluster now see that the president is very serious about using the huge power of his office to try to bully election officials into throwing out the vote.”

On Tuesday, at least three Republican senators broke with the president. According to a tally by the Washington Post, there were 25 Republicans in the Senate who say they will accept the presidential results on Wednesday.