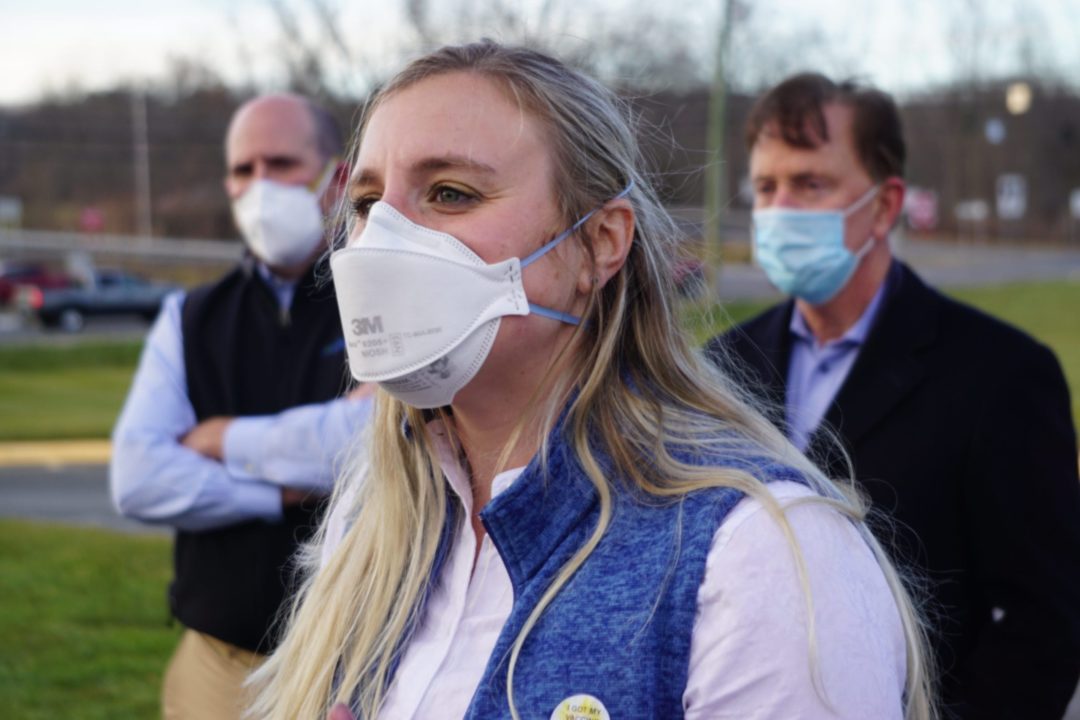 Maley Hunt, the chief operating officer of LiveWell, said 85% of staff and more than 90% of residents consented to vaccination. Listening were Michael Smith, the CEO, and Gov. Ned Lamont.

Southington — The first week of 2021 ended Friday with Connecticut completing its first round of COVID-19 vaccinations in nursing homes, a positive note amid a worrying spike in infections that has claimed 111 lives in skilled nursing facilities in the state from Dec. 30 to Jan. 5.

With the vaccinations of staff and residents at LiveWell, a facility specializing in the care of people with dementia, Gov. Ned Lamont said Connecticut became the first state to bring vaccinations to every skilled nursing facility.

“The fact that by the end of today we’re going to have first doses for all of our nursing homes is an important, big deal,” Lamont said. In the next breath, he leavened good news with bad. “You know, today our infection rate spiked up again, up at about 8½%.”

There were 3,236 new cases and 37 deaths reported Friday.

Such has been the fight against the novel coronavirus. There is no finality, just cycles of good days and bad. Every state is bracing to see how high the infection rate will go after a holiday season of travel and socializing, despite strong public health cautions.

No one, perhaps, knows that better than the staff at LiveWell.

With an early investment in respirators and strict social distancing, LiveWell was a happy outlier throughout the awful days, weeks and months of 2020. While infections raged and thousands died throughout the industry, LiveWell’s protective bubble held.

“This team that works here and the families that have supported us, kept every resident COVID free for over nine months. That’s 279 days,” said Michael Smith, the chief executive officer. “We care for 133 people who are living, all of them, with dementia.”

Discretionary federal money arrived to reward the staff for routine labors that had turned dangerous. Smith said they tried a “social experiment.” LiveWell devised a bonus system geared to the absence of COVID.

On top of a median $20 hourly wage for certified nursing assistants, Smith said, there was an hourly bonus of $1, then $2, and finally $3.

Staff was tested daily with rapid antigen tests. Everyone wore N-95 masks that were replaced daily. Groceries could be purchased and delivered to the facility. Week after week, the reports to the state Department of Public Health from LiveWell were the same.

No infections, no deaths.

Statewide, there were 2,849 deaths of nursing home residents from the initial outbreak in March through July 21, and another 794 from July 22 through Jan. 5, the end of the most recent reporting period. That is more than half of the total 6,324 COVID deaths in Connecticut.

“Unfortunately on December 11, we did have our first elder test positive for COVID-19,” said Maley Hunt, the chief operating officer. “For over 270 days, we kept COVID at bay. Unfortunately, this is a pernicious disease that is highly contagious and it made its way here.”

It took 11 days to quell the outbreak, using negative air pressure and the continued use of N-95 respirators and other personal protection equipment.

“We have now had two full weeks of no residents testing positive for COVID-19, something we are incredibly excited about,” Hunt said.

And on Friday, the vaccine arrived.

Eighty-five percent of the staff and more than 90% of patients would be inoculated by the end of the day, Hunt said.

The high participation rate among staff is a result of meetings where medical staff fielded questions about the safety and efficacy of the vaccine. On Friday, the CEO was among those to roll up his arm for a shot.

As he and the governor spoke to reporters outside, workers leaving at 3 p.m. yelled and gave a thumbs up, a small celebration of a blow against the virus. 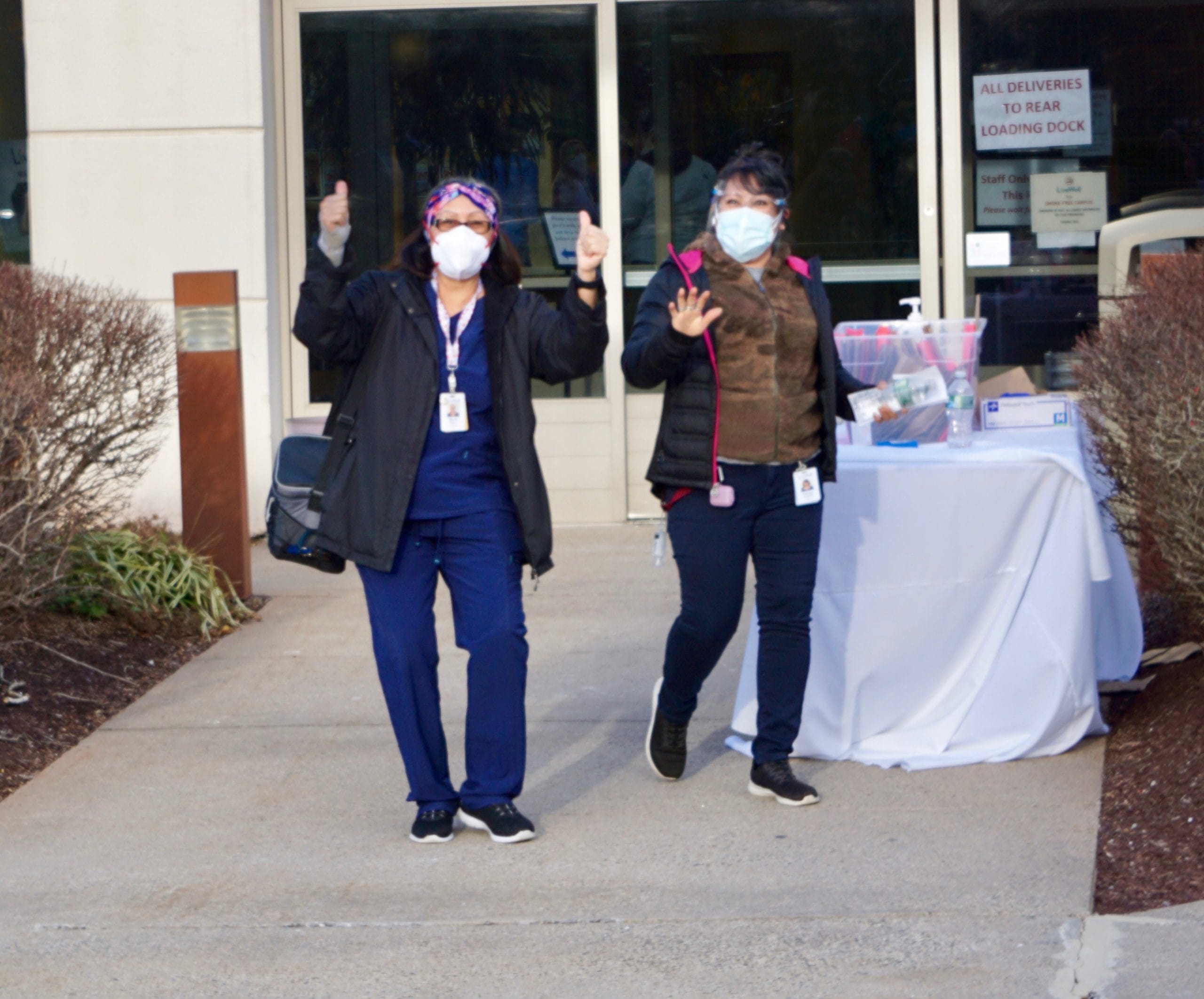 LiveWell employees gave a thumbs up after vaccinations.

“It’s extraordinary good news that virtually all the patients and most of the nurses have now had their first dose,” Lamont said. “We don’t know whether that first dose protects you at 60% or 80%. But it’s going to make a difference. It’s going to make a difference in terms of infections in the nursing homes, obviously make a big difference in terms of what’s going on in our hospitals as well. So give it another couple more weeks, a second dose will be coming on time, I think you’ll see a big difference made.”

Hospitals and nursing homes were prioritized in the first round of vaccinations, Phase 1A.

On Tuesday an advisory group recommended people age 75 and older, essential workers and residents living in congregate facilities like prisons and psychiatric hospitals be offered the vaccine in Phase 1B.

The panel is still determining whether to include in the same phase people with underlying medical conditions, and how to ensure vaccines are distributed to communities of color — which have been disproportionately hard-hit by the virus — before submitting their final recommendations to the governor early next week.

At his Thursday news briefing, Lamont said the allocation subcommittee’s recommendations so far make “pretty good sense” and formally endorsed the suggestions, “as long as I have the right to change my mind if something changes.”

Based on the current prioritization of Phase 1B, an estimated 800,000 people would be vaccinated in this phase of the rollout. As of Thursday, 101,734 vaccine doses had been administered, of which 1,805 were the second shot needed to be fully vaccinated for COVID-19.

Kelan Lyons contributed to this report.