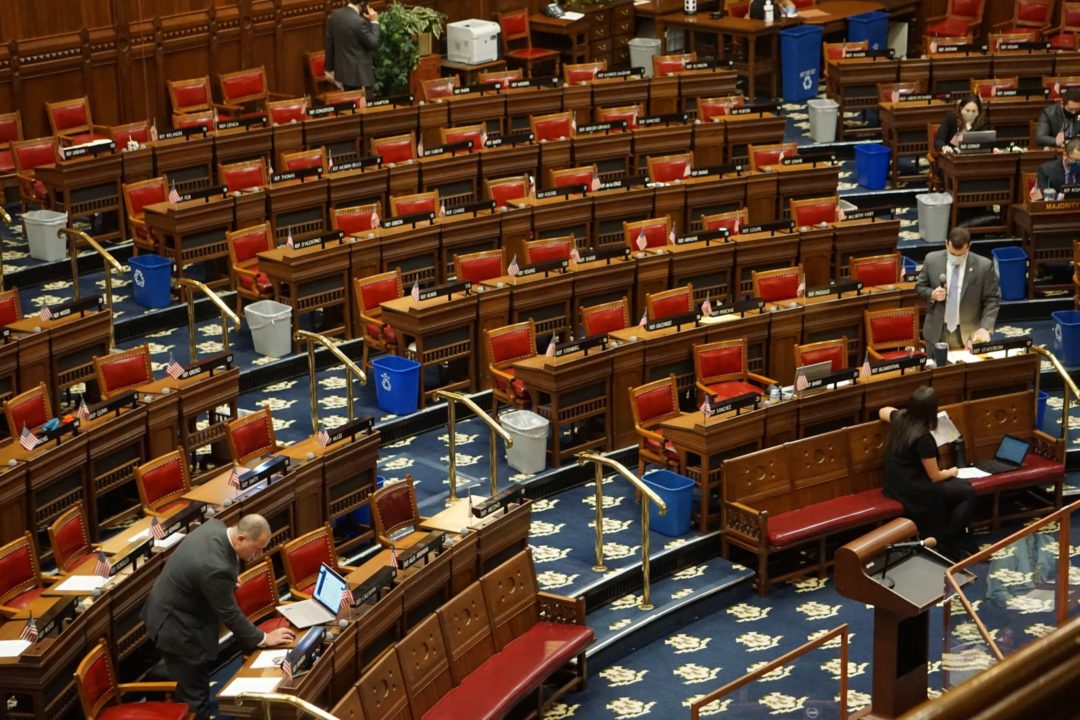 Social distancing: Rep. Craig Fishbein, left, and Rep. Steve Stafstrom debate a judicial nomination in a House largely emptied due to the COVID-19. Most members watched and voted remotely from their offices.

Denied confirmation as chief justice of the Connecticut Supreme Court in 2018, Andrew J. McDonald was easily endorsed Thursday for a second term as an associate justice on a vote of 104-37 by the House of Representatives.

Debate was brief in a chamber largely empty due to COVID-19, a stark contrast to the protracted and heated fight two years ago, when McDonald’s nomination cleared the House by a single vote and was rejected by the Senate on a vote of 19-16.

Only two lawmakers spoke in opposition Thursday, each citing McDonald’s vote in a 4-3 opinion that struck down the last vestiges of capital punishment in Connecticut. Both called the opinion an example of judicial activism.

“If he really wants to legislate, he could retire from the bench and run for office like all of us. And he could legislate to his heart’s content over here,” said Rep. Larry Butler, D-Waterbury, the only opponent who spoke at length.

Rep. Steve Stafstrom, D-Bridgeport, co-chair of the Judiciary Committee, said McDonald unquestionably possesses a first-class legal intellect and judicial temperament, and he cautioned against assessing nominations on a single case.

Three Democrats voted with 34 Republicans against McDonald; Fifteen Republicans voted with 89 Democrats in favor. His nomination now goes to the Senate, an evenly divided chamber in 2018 that now is controlled by a solid Democratic majority of 23-12.

The session, originally scheduled for next week, was advanced by a week as a precaution against the possibility of civil unrest and protest in state capitals timed to the presidential inauguration of Joe Biden on Jan. 20.

The state Capitol has been closed to the public since March, when the 2020 session effectively ended as the coronavirus quickly spread through Connecticut.

The 2021 session opened last week under new rules. Hearings and committee meetings are virtual, while floor debates are conducted under tight social-distancing rules. Access to the chamber is limited, and most House members watched and voted remotely from their offices.

The votes for 13 judicial reappointments Thursday were the first substantive actions by the House, other than the election of House Speaker Matt Ritter, D-Hartford, and adoption of the rules on opening day.

Judges in Connecticut are appointed to eight-year terms, with a rebuttable presumption that they will be reappointed by governors and confirmed by legislators, absent good cause, until reaching the mandatory retirement age of 70.

McDonald, 54, went to the state’s highest court in 2013 with a higher profile than most justices. He had been a liberal Democratic state senator who co-chaired the legislature’s Judiciary Committee, a cauldron of conflict over abortion, gay rights and criminal justice issues.

In 2011, he left the legislature to become the general counsel to Gov. Dannel P. Malloy, who nominated him to the Supreme Court and then as its chief justice.

As a nod to judicial independence, the legislature has generally shied from using controversial legal opinions as a rationale for denying reappointment. But the death penalty case nearly ended the career of Richard N. Palmer, the justice who wrote the 4-3 opinion, as well as a decision legalizing gay marriage.

On a heavily lobbied 19-16 vote in the Senate, Palmer was confirmed for a fourth and final term in 2017. Palmer retired after turning 70 last year.

As the first openly gay member of the state’s highest court, McDonald’s nomination as chief justice had a politically charged dimension. It came after an unusual public lobbying campaign on his behalf by the legal profession.

The 19-16 vote against McDonald in the Senate stopped the ascent of a political and legal trailblazer for the gay community — a factor that opponents insisted was irrelevant and supporters said could not be ignored.