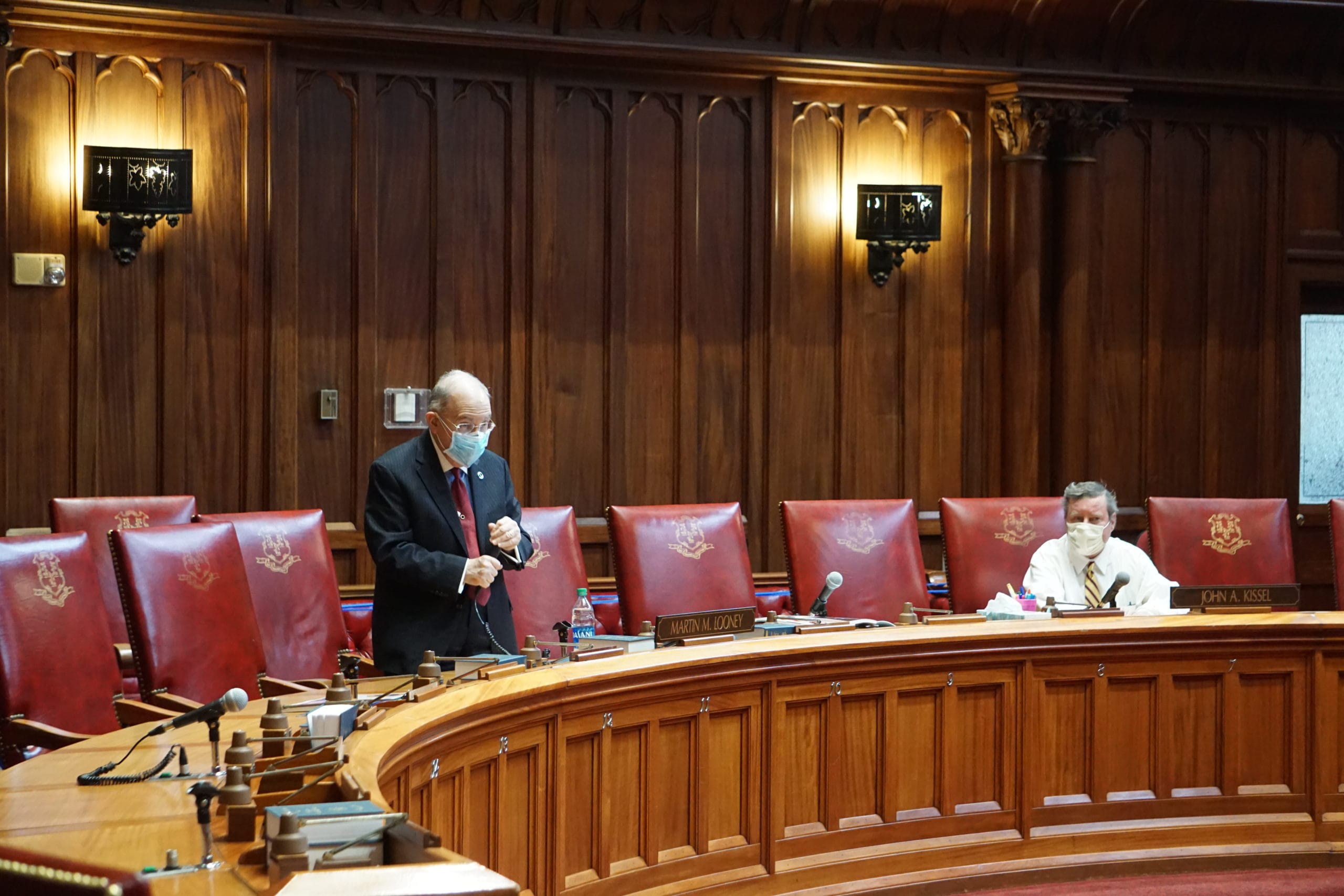 The state Senate that once blocked one of its former members, Andrew J. McDonald, from ascending to chief justice of the Connecticut Supreme Court quickly and quietly confirmed him Friday for a second term as an associate justice.

Two years ago, Republicans voted as a bloc in an evenly divided Senate to deny McDonald a place a history as the first openly gay chief justice of the highest court in any state, denouncing him as a judicial activist unfit to lead the state’s judiciary.

On Friday, the Senate voted 26-6 to confirm the 54-year-old jurist for a second eight-year term on the court. The House voted 104-37 for the nomination Thursday.

The only senators who rose to speak did so in praise of the justice, among them Sen. John A. Kissel, R-Enfield, the ranking Republican on the Judiciary Committee.

Before saying McDonald deserved reappointment, Kissel referred to the extraordinarily bitter nomination fight from two years ago in the blandest terms, saying “That did not work out for him.”

Six of those 12 Republicans cast the only no votes Friday. Five others voted for confirmation, including the caucus leader and deputy leader, Sens. Kevin Kelly of Stratford and Paul Formica of East Lyme.

Formica said after the vote that the arguments used against McDonald’s nomination for chief justice no longer were relevant.

Sen. Rob Sampson, R-Wolcott, a conservative critic of McDonald, recused himself. His appeal of a State Elections Enforcement Commission ruling against him in a campaign finance case is pending before the court.

As a Democratic state senator from Stamford, McDonald was the co-chair of the Judiciary Committee. He left the Senate to become the top legal adviser to Gov. Dannel P. Malloy, who nominated McDonald as an associate justice in 2013 and then as chief justice in 2018.

Judges of the Superior, Appellate and Supreme courts are nominated by governors and confirmed by lawmakers to eight-year terms. Absent cause, the jurists can expect reappointment until the mandatory retirement age of 70.

His promotion to chief justice offered critics of McDonald an opportunity to vote against him without breaking the legislature’s tradition of not using a controversial opinion to deny a justice reappointment. It also came at a time of rare strength for the GOP.

In 2018, the Republicans held an effective 18-17 majority on the question of McDonald’s confirmation as chief justice.

That’s because Democrat Gayle Slossberg of Milford, who was not seeking re-election that year, refused to vote, asserting a conflict due to two cases involving her husband, a lawyer. Another Democrat, Joan Hartley of Waterbury, joined the Republicans, producing the 19-16 rejection.

The threat of COVID-19 and concerns about unrest because of the assault of the U.S. Capitol last week by a pro-Trump mob were evident Friday.

As a social distancing measure, the Senate operated under new rules that allow senators to vote remotely from their offices. Lt. Gov. Susan Bysiewicz, who normally presides, was home in self-quarantine after a staff member’s positive test for the virus.  Bysiewicz has tested negative since the exposure.

The session originally scheduled for next week was moved to Friday, so that neither chamber of the General Assembly will be in session next Wednesday, when Joe Biden is inaugurated.

“Obviously, these are difficult and stressful times, not only for us, but our families and staff and others who work here at the state capitol as well,” said Senate Majority Leader Bob Duff, D-Norwalk. “I want to take a moment to to thank the folks who are keeping us safe during these trying times.”

On Friday, among the State Capitol Police officers greeting lawmakers was one officer carrying an M-4 semi-automatic rifle.

“We don’t know when or how,” Duff said, “but I know that over some time our democracy will prevail.” 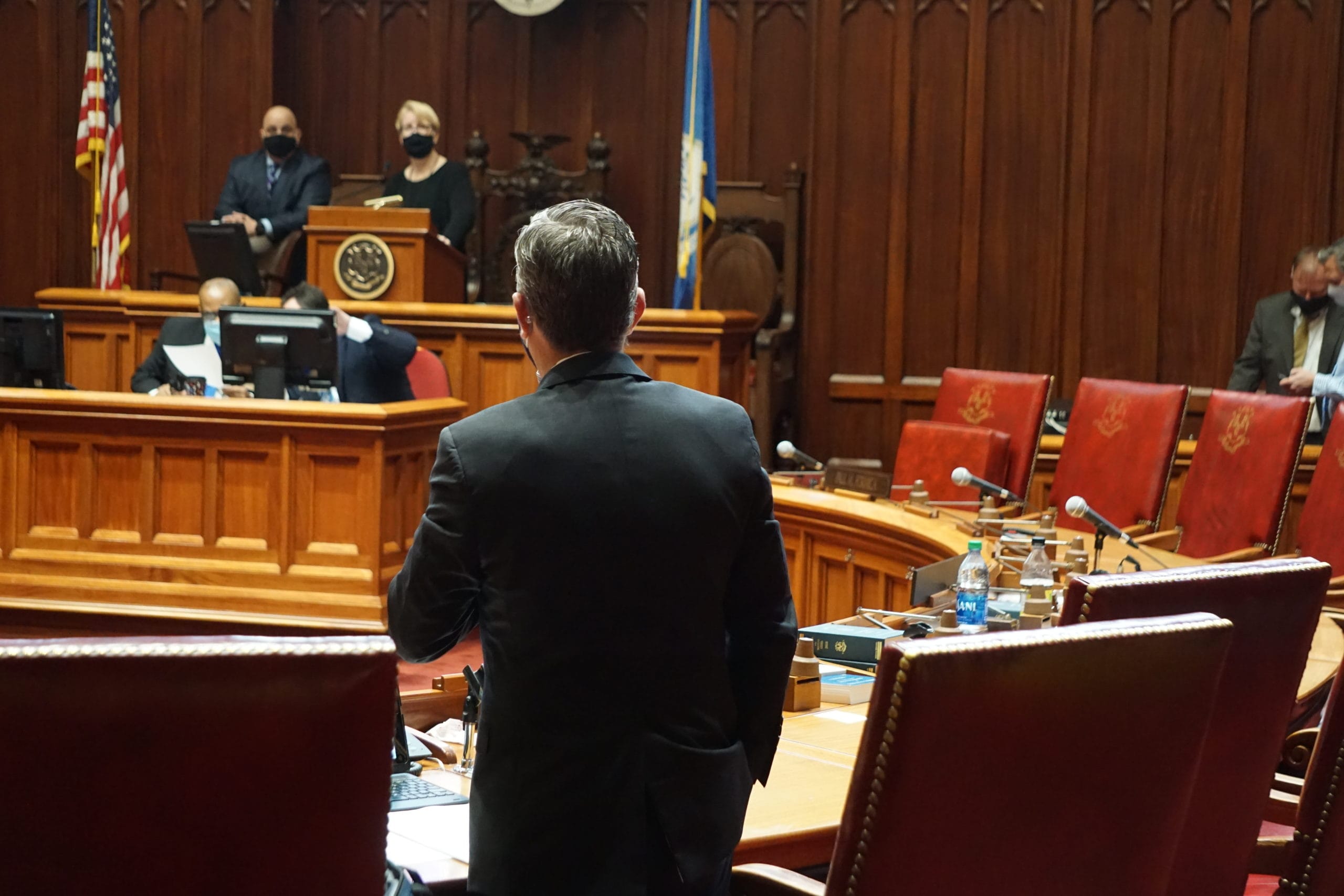