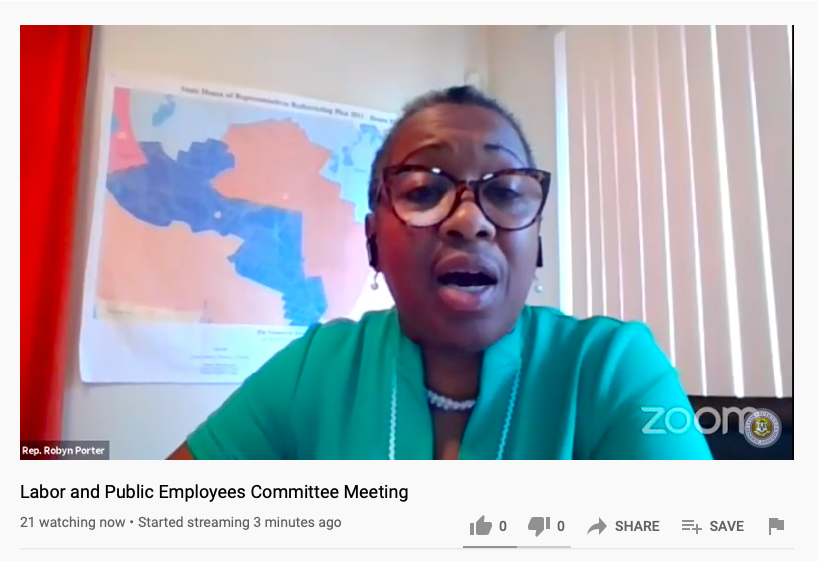 Rep. Robyn Porter, as viewed during a committee meeting streamed on YouTube. Other meetings are on CT-N.

The Democratic co-chairs of the legislature’s Labor and Public Employees Committee skipped the masks, but they undeniably were socially distant. Rep. Robyn Porter ran the meeting from her dining room table in New Haven. Sen. Julie Kushner participated from her den in Danbury.

On a computer screen, Porter addressed the committee members, who logged in on Zoom from across Connecticut. For the public, the proceedings streamed live on YouTube. An audience of 29 watched.

Not quite three weeks into a session unlike any other, the Connecticut General Assembly is finding its way, learning how to function in a pandemic that prematurely ended the regular session in 2020.

“It is different, it is strange, but it’s what we’re doing,” Porter said. “So we’re gonna make it work.”

At least 28 state legislatures are working or voting virtually to some degree in 2021, according to a survey by the National Conference of State Legislatures. A spike in COVID-19 cases temporarily shut down legislatures this month in Colorado, Missouri and Wyoming.

Connecticut opened its session outdoors on Jan. 6, swearing in senators on the blacktop on the south side of the State Capitol and the House members at the bottom of the north steps, amid some grumbling that the legislature was being overly cautious.

Last week, the Labor and Public Employees Committee took its first votes, endorsing concepts and proposals to be drafted as bills and subjected to a public hearing.

“I am looking forward to that tremendously, because it will be the first time that every single person on the committee will have a shared experience with those who testify before us,” said Kushner, a retired UAW negotiator.

The measure was one of several inspired by the pandemic’s impact on employers and their employees. At this point, they have more questions than answers. Among them: Are employees working at home properly reimbursed and equipped?

Porter said the committee also is exploring protecting workers who were laid off but not recalled when businesses reopened. Unions are strongly urging passage of a bill that would create a rebuttable presumption for some workers that a COVID infection was work-related and covered by workers’ compensation. Businesses are opposed.

The Capitol has been closed to the public since March, when the first of 240,000 COVID infections were detected in Connecticut. The public access network, CT-N, has become the public’s window, along with YouTube.

Brief special sessions in July and September were dress rehearsals for 2021. Hearings were conducted by Zoom. Access to the Senate and House was limited during the debates, as they are this year. On the question of passage, lawmakers can vote remotely from their offices at the Legislative Office Building.

The rules for committee votes are more permissive. Lawmakers can be home, but they must appear on camera during roll call votes, identify themselves for the record, and then vote. It can be time-consuming.

Rep. Maria Horn, D-Salisbury, the co-chair of the Public Safety and Security Committee, opened her meeting last week with an apology and a plea.

“I apologize in advance if I have to interrupt some of you in order to eliminate overlap, and to make sure that there’s a clear record here. So I’m not trying to be rude,” Horn said. “I’m gonna ask everyone, remind everyone to please stay on mute when you’re not speaking so that we can hear the speakers better and have a better record of the meeting itself.”

The labor committee found a consensus to at least raise bills for public hearings, allowing Porter to call voice votes. But even a voice vote had a minor complication: there initially was little response.

“Rep. Porter, I’m not sure people had time to unmute, so we may want to do that again, giving people the opportunity to unmute their Zoom,” Kushner said.

Disembodied voices could be heard, all in assent. 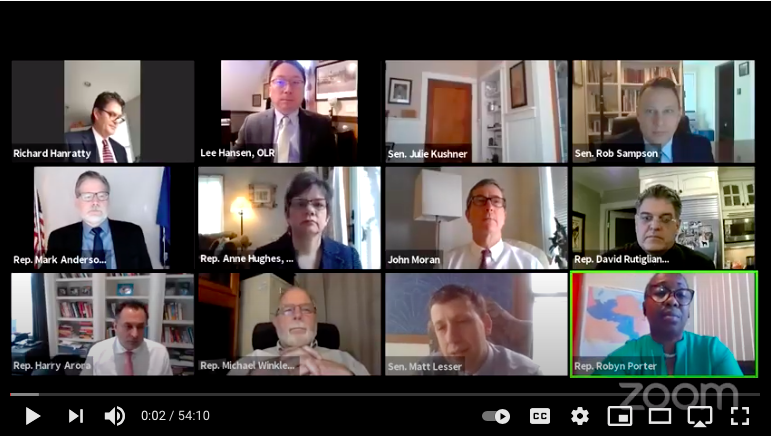 The gallery view at the start of a Labor and Public Employees Committee meeting.

Republicans seemed more concerned on some committees than others about early votes to explore legislative concepts. House Minority Leader Vincent J. Candelora, R-North Branford, said that may reflect whether the Democratic co-chairs have consulted with the ranking Republicans.

“Generally speaking, I think the committee process is only going to be as good as the people organizing them,” he said.

Masks and social distancing have not been as polarizing in Connecticut as some other states, though some members of the GOP minority have fought various COVID restrictions in lawsuits, either as lawyers or litigants.

And some Republicans complain that the state Capitol should be open and that the General Assembly is too cautious. On Friday, at a meeting of the Government Administration and Elections Committee, Sen. Rob Sampson, R-Wolcott, raised an objection to meeting by Zoom.

“I’m going to do this at every meeting, because I really do object to the idea that we are using a means to communicate with the citizens of our state that not all of our citizens have access to,” Sampson said. “There are a lot of elderly people that do not have access to a computer. They’re not computer literate, and they are being kept out of our process.”

Of course, there are plenty of people, elderly and otherwise, unable to spend a day at the legislature, waiting their turn to testify at a hearing. Kushner said the technology is improving access for some, even while the Capitol remains closed.

Of necessity, the pandemic has pushed legislatures to invite public participation through technology, an issue that’s hardly new. Eighteen years ago, the Office of Legislative Research produced a paper about creative ways for the public to participate — video conferencing among them.

Sampson said he thinks the committees should work under a hybrid system, meeting in person with the public in attendance, using the technology as a supplement. Sampson acknowledged he was unsure, however, exactly how that might work.

Until infections subside and vaccinations become readily available, the legislature would hew to the guidelines for public gatherings set by the Centers for Disease Control and Prevention, Ritter said.

He has concerns about the quality of public access when the committees begin public hearings. Committees might consider breaking into two, allowing two hearings to go forward on the same issue, he said.

“I think it’s all manageable,” said Formica, the owner of a popular fish market and restaurant. “What I tell my guys at the restaurant is you always err on the side of customer service.”

Access is important, but safety comes first, he said.

Horn, the public safety co-chair, said she would prefer face-to-face meetings when they are deemed safe, but she acknowledged some advantages in the virtual world. Her home in Litchfield County is a 90-minute drive to Harford, and avoiding a three-hour round-trip commute is one upside of the pandemic.

Lobbyists have written to legislative leaders, urging some changes. For one, they are asking that all the committee members be visible on Zoom, not just the person speaking.

Like reporters, lobbyists have noticed that Zoom offers a narrow window. At the Legislative Office Building, seeing a committee members’ reaction to testimony and each other is valuable intelligence. So is observing the small knots of lawmakers and lobbyists, which can indicate a deal is in the offing.

“You’re deprived of an opportunity to use your instincts, your Spidey sense,” said Kate Robinson, a long-time lobbyist. “You can’t sense which lobbyists are going into which room, which legislators are having a huddle. You can’t sense that.”

Kushner said she mourns another loss in not being at the Capitol complex: running from meeting to meeting. She used to average 10,000 steps a day.

On Friday, she got to her desk at 8 a.m., toggling between two computers. It was very efficient, but sedentary. At 2:30 p.m., her watch told her she had walked only 518 steps.