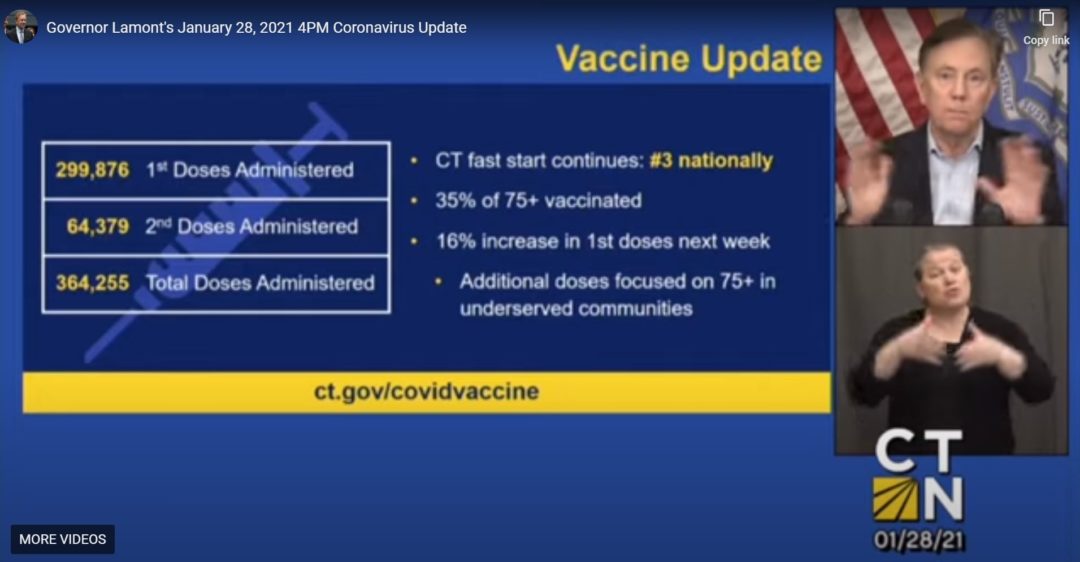 Even though the state’s overall COVID numbers are continuing to drop, the count of COVID-related deaths has remained fairly constant in recent weeks, and on Thursday the state passed 7,000 deaths from the virus — even as the governor announced he is considering relaxing restrictions in houses of worship as more of the state’s elderly population gets vaccinated.

“It’s frustrating as heck. Obviously, fatalities are a lagging indicator, but it’s breaking my heart. We ought to be bending this curve very, very soon,” Lamont said. “And it’s not just Connecticut — it’s happening in 49 other states as well. The fatalities are still cresting.”

But the rest of the COVID-19 indicators are good, Lamont said. On Wednesday, hospitalizations dipped below 1,000, and the state’s positivity rate fell to 3.55 percent, the lowest it has been in several months. In nursing homes, where residents are in the midst of getting their second shots, the number of infections fell to 166, about a third of what they were only a few weeks ago. There were 66 COVID-related deaths in nursing homes over the last week, a decrease from 110 the week before. There have now been 3,848 deaths of nursing home residents.

Lamont said that as the vaccinations of the 75 and older population continue, he is going to start looking at relaxing some restrictions, starting with houses of worship. Right now, they can only have 25 percent of their indoor space filled, or 100 a maximum of people.

“And I got to look at the houses of worship and fundamentally ending the numerical cap,” Lamont said. “Look, I’ll be blunt. We’re going to have all the folks 75 and above vaccinated, who want to get vaccinated at least, for their first dose within a couple of weeks, moving quickly into the 65 and above. It’s much safer to do, to go to church once you’ve been vaccinated.”

Lamont said that 35 percent of the people in the state who are 75 or older have now been vaccinated. Many of them are in nursing homes, which are about two-thirds of they way through their second round of vaccines.

Currently residents who call the 2-1-1 line are still only getting appointments only at Rentschler Field in East Hartford, a difficult drive for many elderly residents in the state. To give people more options where they can go for vaccinations, the state is going to send people who call to five more existing sites in Bristol, Danbury, Kent, Middletown and Stamford as early as next week.

Lamont said the state got good news from the federal government — starting next week, the state will get a 16% increase in the number of first doses being delivered, bringing the state from 46,000 to 54,000 doses a week.

State officials acknowledged that they need to do a better job getting minority populations vaccinated. The CDC term is “socially vulnerable communities,” and right now, only about 23 percent of those residents have gotten their first doses, compared to the broader population where the number is over 35 percent, according to state Chief Operating Officer Josh Geballe.

The state has started mobile vaccination clinics in several cities and in elderly congregate settings, he said.

State Department of Correction officials also announced Thursday that vaccinations in the prisons will begin next week, with corrections officers and inmates over 75 in line to get vaccinated. The state hasn’t released a time frame on when all of the other prisoners will be vaccinated.