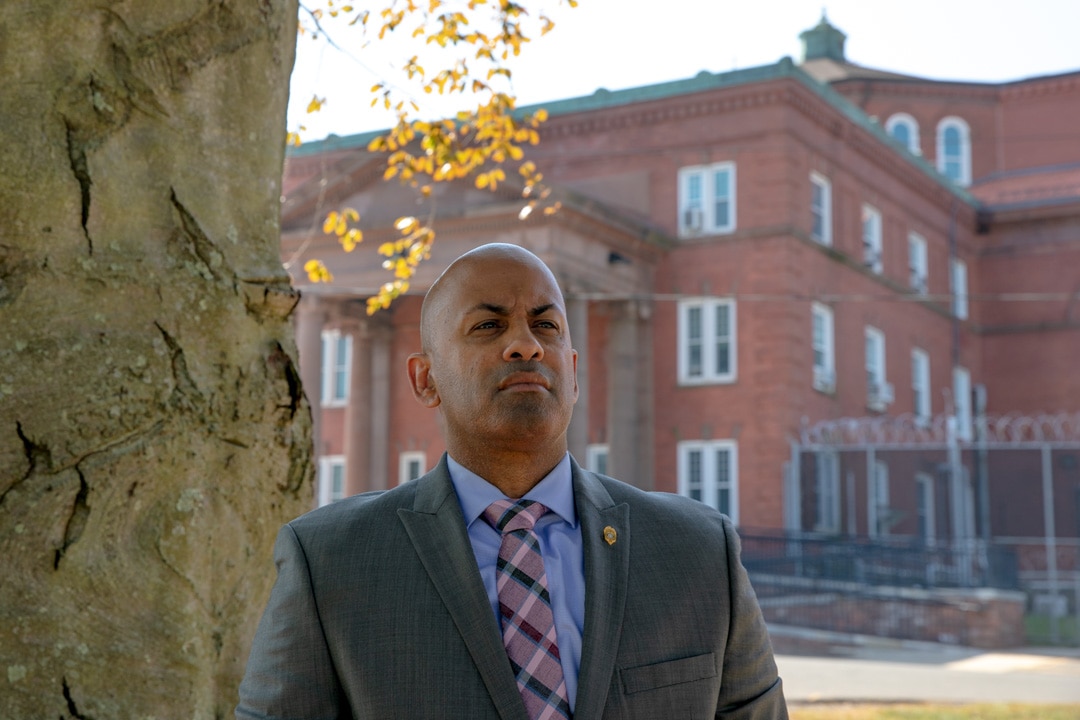 Angel Quiros poses for a portrait on Wednesday, Sept. 23 at Cheshire Correctional Institution. “To me, the most important is housing and employment after the release,” he said about how he will lower the recidivism rate. “If you don’t have those two, the chance of the individual succeeding is going to be low.”

During what could end up being a pro-forma hearing on his path to being confirmed as the state’s next commissioner of the Department of Correction, Angel Quiros on Thursday announced that Department of Correction staff and the 27 incarcerated individuals who are age 75 or older will begin getting the COVID-19 vaccination on Feb. 1.

But many of the 5,400 DOC employees eligible for the shot might not want it. Quiros said about 45% of 4,300 staff surveyed have indicated they would get the vaccine. Around 15% were undecided.

“They cannot be forced to take the vaccination,” Quiros said of his staff, so the department is focusing on educating employees to increase the compliance rate. Quiros said the DOC could end up with a 60% compliance rate among staff, based on the survey.

“We want that percentage higher,” he said, explaining that educating the incarcerated population and staff is critical in making sure herd immunity is reached. He hopes prison staff who declined the vaccine will be more willing once they see that their peers will get the shots and still manage to show up to work.

Quiros, whom Gov. Ned Lamont nominated to be the DOC commissioner after his predecessor Rollin Cook stepped down over the summer, made the comments in a virtual hearing before the Executive and Legislative Nominations Committee on Thursday morning. House members unanimously confirmed his nomination after almost two hours of questioning. Quiros’ final confirmation will be before the full House of Representatives at a later date.

Lawmakers appeared wary of such a low vaccine compliance rate among corrections staff and asked Quiros to consult with the legislature if more staff do not get immunized so they can come up with a plan to reach herd immunity.

“If only 50% of the members of your staff are getting vaccinated, what’s the point, if that’s not creating herd immunity?” asked Sen. Bob Duff, the Senate Majority Leader. “We need to make sure we’re keeping everybody safe, all the way around.”

A 31-year veteran of the agency who worked his way to the top of the DOC, Quiros has been with the department from the “lock ’em up” ethos of the 1990s, to the ongoing criminal justice reforms demanded by state officials and advocates.

“I’ve seen our philosophy evolve from being tough on crime to a more holistic, thoughtful, restorative approach,” Quiros said. “This agency is part of who I am. And I believe with all I am that I can lead this department through its future challenges and the evolutions that I know we can embark on today.”

Citing the precipitous decline in the number of people in correctional facilities since the onset of the pandemic — there are about 3,300 fewer people behind bars, but racial disparities have slightly increased, and about 72% of the incarcerated population is Black or Hispanic — Quiros said he anticipated closing two correctional facilities in this budget year, once the pandemic is better under control and inmates and DOC staff are vaccinated. He plans to announce a prison closure by mid-February.

More prison closures will be considered in the future, Quiros said, depending on continued COVID-19 infection rates in correctional facilities and whether arrests increase after Quiros closes two prisons.

Northern has been the target of advocates’ ire for years. The United Nations has said the solitary confinement at the Somers prison could amount to torture.

Quiros pledged to reform the DOC’s “restrictive status program, to reduce unnecessary restrictions, while providing more rehabilitative programming in a matter that continues to prioritize the safety and security of our staff and the incarcerated population” once the pandemic is over.

Northern’s population has fallen dramatically since it opened in 1995. Earlier this month, the “Justice Reinvestment Coalition” — a group of prison health care workers, mental health workers and advocates for the incarcerated — called on officials to close Northern and reallocate money toward mental health services, housing and employment for incarcerated people to address root causes of crime.

Quiros reiterated his support for programs that might reduce the likelihood of people ending up incarcerated. He talked about the importance of education behind bars and his plans to enhance workforce training opportunities by networking with local communities so people returning home from prison or jail have a better chance of finding work.

“The most important things for an individual being successful is having a home with family support, and then that job,” said Quiros.

Another concept raised repeatedly by lawmakers was the costly service of prison phone calls. Connecticut has the most expensive rates for such calls in the nation, according to the advocacy organization Worth Rises, which has pushed to make the calls free in past legislative sessions. Advocates have expressed renewed concerns about how much it costs for members of the incarcerated population to stay in touch with their loved ones after the DOC recently announced it would give tablets to inmates — and charge them for emails and entertainment.

According to the DOC, about 1,500 tablets were given to inmates at MacDougall-Walker Correctional Institution. The goal is to give members of the incarcerated population access to free educational books and videos, in the hopes that doing so will make it less likely that they wind up back in prison once they’re released. The tablets were provided free of charge, with the expectation JPay, Inc. — which is owned by the same company that the state contracts with to provide prison phone calls — would be able to make money by charging for premium services such as movies, songs and video games.

Quiros said that, separate from the tablet contract, the DOC set up free virtual visits over laptops in October and have hosted more than 5,000 such meetings in the past three months. He said the DOC is not making any income off the tablets and compared the nominal charge of the emails to the cost of stamps.

“Let me be clear, for an individual under my custody to be successful, it is key, that connection, while they’re incarcerated, with their loved ones,” Quiros said. “I will be an advocate to make sure that the pricing on the inmate phone system is reduced. If we can get to zero, that’ll be great, with the understanding that even if it gets to zero, there’s going to be a cost for those phone calls to the Department of Correction, and it becomes a budget issue of how we’re going to pay for it.”