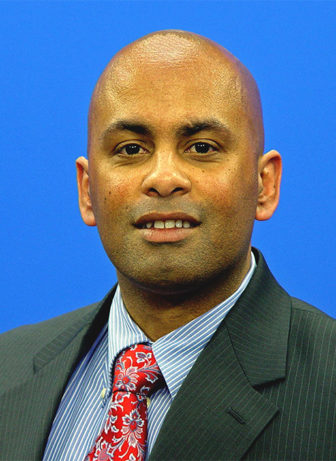 Angel Quiros has been nominated to be the state’s next Department of Correction commissioner.

Gov. Ned Lamont on Wednesday nominated Angel Quiros to be the next Department of Correction commissioner.

Quiros, a 30-year veteran of the department who grew up in Hartford, previously had been the DOC’s deputy commissioner of operations and has served as interim commissioner since Rollin Cook stepped down on July 1. He will be the agency’s first Latino commissioner, and will be in charge of overseeing an incarcerated population that is disproportionately made up of Black and Hispanic people.

Acknowledging Connecticut’s role as a leader in criminal justice reform, Quiros vowed to continue the state’s progress by offering meaningful programming in correctional facilities that give people the tools they need to lead a successful life once they leave prison or jail.

“No one deserves to be defined by their biggest mistake or their worst decision,” Quiros said. “Incarceration is the penalty. Our job is to prepare people for a fresh start.”

The nomination follows a national search for a new prison chief. The five-member selection committee fielded applications from across the country but ultimately came back to Quiros for his “unmatched experience” and knowledge of Connecticut corrections, said Marc Pelka, Lamont’s under secretary for criminal justice policy and planning.

Having been on the job for three decades, Quiros has been in the department during different eras of criminal justice in Connecticut.

“Man, you have seen a lot,” Lamont told Quiros during Wednesday’s news conference. “I mean, we’ve gone through, ‘Lock them up and throw away the key,’ back 25 years ago, and that didn’t work. We’ve been working hard on criminal justice reform.”

“In the future, I do see facility closures,” Quiros said. “When you take a look at March 1, 2020, the agency had the bed space to close a facility of 500 beds. The pandemic put a stop to that… I just want to take the time to go through the second surge, if it comes, and have that space so that we can have the social distancing to stop the spread.”

Last August, the population at Northern Correctional Institution, the state’s most secure prison – described by advocates as a place that inflicts psychological pain on those held there – fell to just 76 people. During COVID, authorities transferred sick inmates to there. Quiros said he would end that practice, acknowledging that inmates were hiding symptoms to avoid being transferred there. He said he had identified another correctional facility to send sick inmates, but declined to name which one since he hadn’t yet told the warden.

Quiros takes over as the state’s prisons continue to weather the pandemic and finishes a second round of mass testing.

In late July, the state settled with the ACLU of Connecticut in a federal lawsuit that requires corrections officials to provide inmates with adequate cleaning supplies and allows them to shower at least every other day.

The DOC is also mandated to continue prioritizing inmates for discretionary release who are age 65 or older, or have serious underlying medical conditions, a process that, combined with a shutdown of the courts and significant declines in arrests, has led to a historically low prison population.

Quiros acknowledged that the department made “mistakes” in its early handling of COVID-19, like not allowing inmates to shower, a policy the agency has since rolled back. Quiros said the missteps will make them better prepared to handle the virus in the fall.

Another issue Quiros faces early in his tenure is when to allow visitors back into correctional facilities, where visits have been suspended since March. Families with incarcerated loved ones are still pressing officials to allow visitations to resume. According to the Marshall Project, nine states have resumed visitations with additional precautions to prevent an outbreak.

Quiros said officials were exploring how they could use technology to keep incarcerated people in touch with their loved ones. His team has until the end of the month to give him a proposal on how to use Microsoft Teams for virtual visits. The agency is also looking into allowing non-contact visits, to prevent the virus from spreading.

“And then the last piece that we’ll tackle is the social visits, how [are] social visits gonna look when the loved ones are coming into a correctional facility,” Quiros said, though he stressed officials must be careful, because even though the number of symptomatic inmates has gone down, “we still have 3% of the population there are asymptomatic, so I have to be very careful and very cautious, not only to protect the staff, protect the offenders, but then protect the citizens of the state of Connecticut coming into these correctional facilities.”