More than two months after COVID-19 began sweeping across Connecticut, newly released data provides the most comprehensive look yet at how the virus has affected the state’s criminal justice systems.

The Office of Policy and Management’s Criminal Justice Public Policy and Planning Division released its May monthly indicators report this week. Because each report’s figures are from the previous month, April’s assessment included data from the beginning of March, before the onset of the pandemic; the new document provides a full months’ worth of analysis into how the novel coronavirus has impacted police, courts and the prison system.

Members of the Criminal Justice Policy Advisory Committee met by video Thursday to discuss the findings. Here are five key takeaways from the latest data on Connecticut’s criminal justice systems.

About 2,700 people were arrested for crimes statewide in April, a 55% decrease from April 2019. Officials previously said the number of people arrested in March was the lowest they had seen since they started collecting the data in 2008; there were 2,307 fewer people arrested in April than in March.

“That raises lots of questions for insights about broader societal changes that are happening, and how that impacts activity from the public and the connection to arrest activity that occurs,” said Marc Pelka, Gov. Ned Lamont’s under secretary for criminal justice policy and planning. 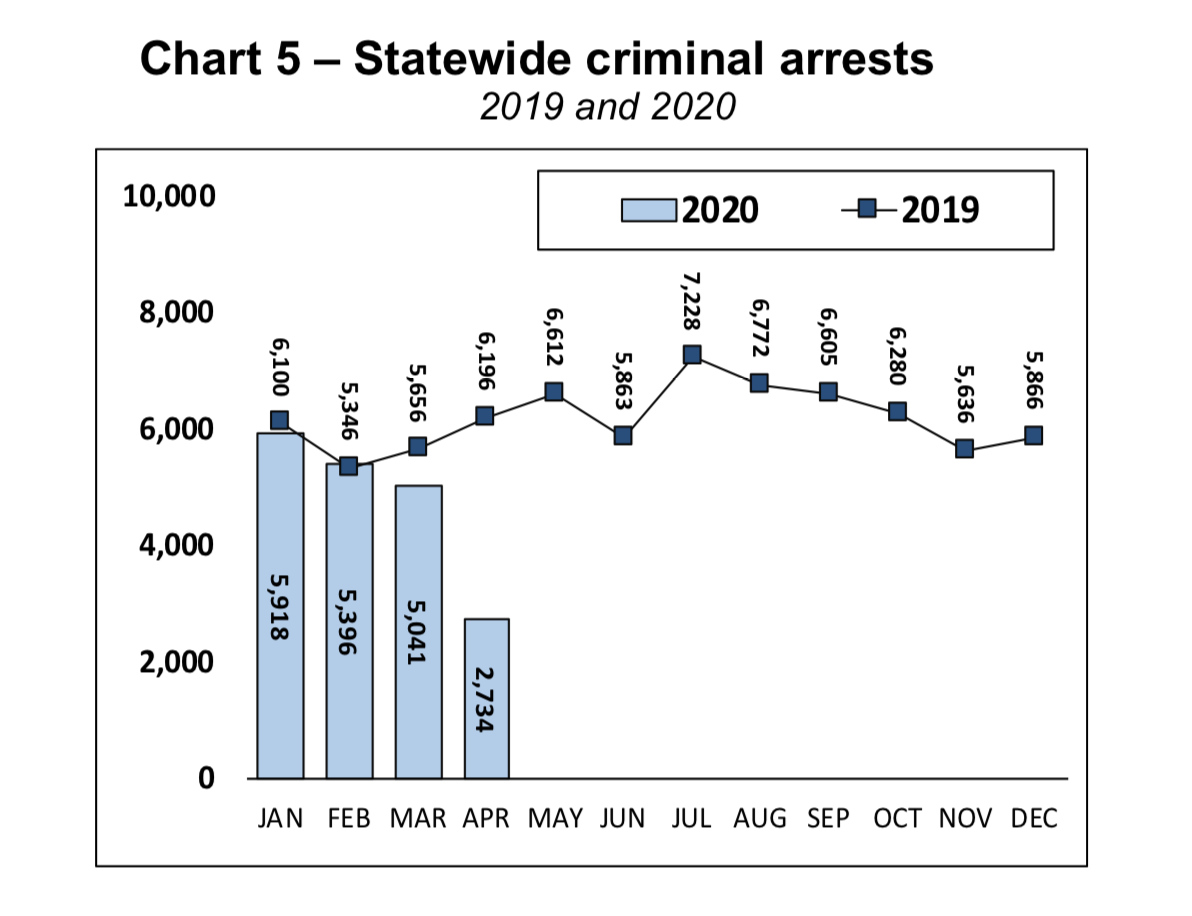 About 840 people were arrested for motor vehicle violations in April, a 75% decrease from the previous month, reflecting the pandemic’s impact on motorists’ use of the road.

Vernon Police Chief James Kenny cautioned that the criminal arrest figures could be skewed. He suggested the courts may not have the latest arrest figures because police departments can hold onto paperwork for minor cases that don’t require an immediate arraignment.

“Many of these cases we’re holding here and have provided the courts the information, but haven’t necessarily been entered into the system yet,” Kenny said. “So I’d be cautious about saying that there’s a big drop in arrests because we may see a huge spike when the courts get back into full operation when some of these minor cases start hitting the dockets.”

The number of pending criminal cases grew by almost 25% between March 16 and May 27, according to the Judicial Branch, in large part because of preventative measures taken to protect court staff, judges and the public from the virus. Court officials are currently only handling the highest-priority cases and emergency matters.

Pending motor vehicle crime cases, meanwhile, increased 17.6% during the same period. Ongoing motor vehicle and criminal infraction cases — which would only result in fines, not jail time — were up by 11.7%. Undecided small claims cases, in which a person can sue for up to $5,000 in money damages, were up 54.4 percent.

Many of these cases were already pending before COVID-19 struck, a Judicial Branch official noted. New court filings and criminal arrests have been significantly lower during the pandemic.

Despite the increase in pending cases, the official added, the numbers are well below what the branch has managed over the last few years.

The number of people admitted to state correctional facilities fell by 65% between March and April. Just 355 people were sent to jail. No one was sentenced for a crime in April because sentencing hearings have been suspended since mid-March.

Preliminary numbers for May show a slight uptick in the number of people admitted to DOC facilities before they’ve been convicted of a crime. More people were admitted pretrial in the first three weeks of May than the entire month of April, though officials said admissions could still be historically low for the month of May. 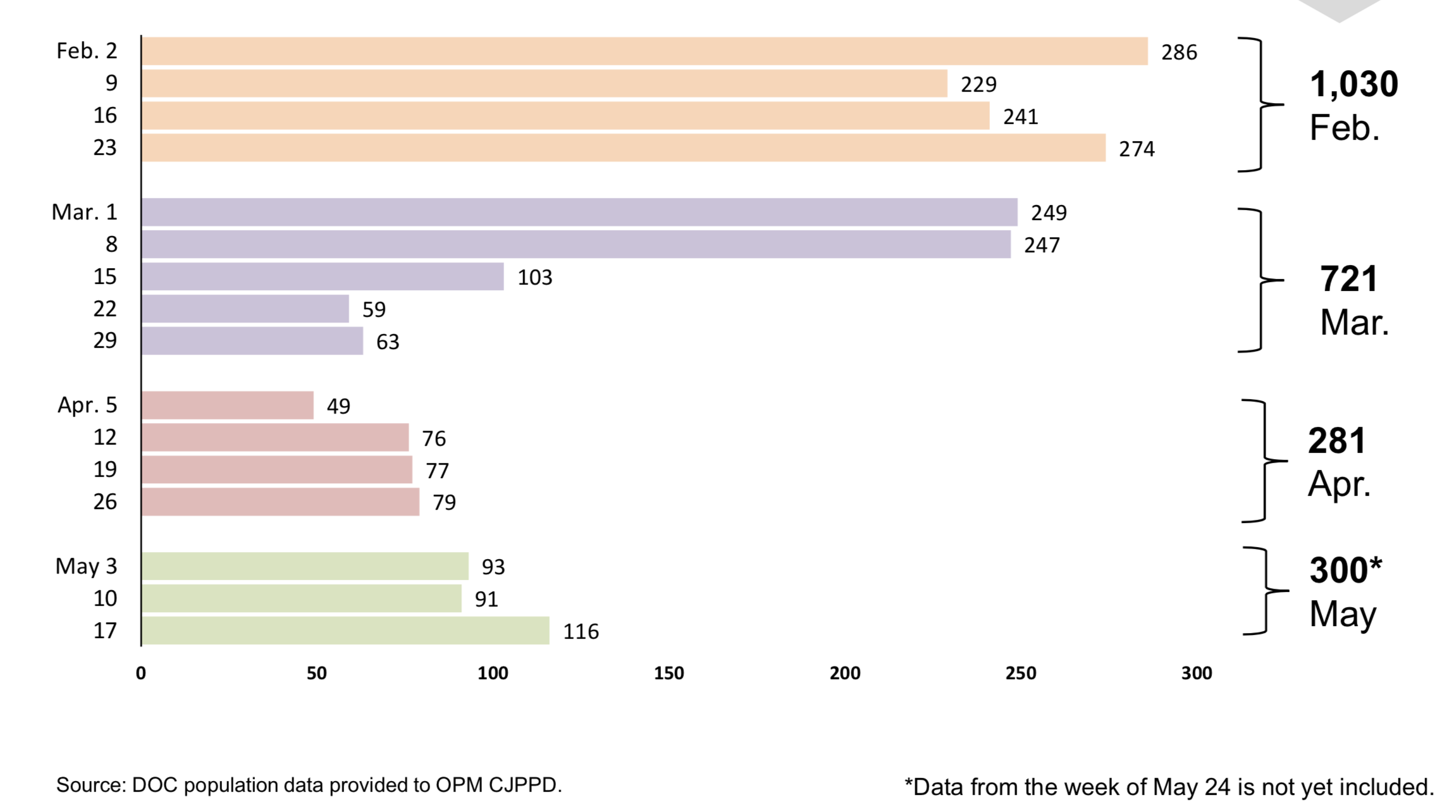 DOC pretrial admissions from February to May

The state will resume limited operations on adult cases in courthouses in Middletown, Rockville and Torrington beginning June 8. The May monthly indicators report notes that admissions to the corrections system will likely pick up as arrests increase in the warmer months and the Judicial Branch resumes its normal operations.

A decrease in court hearings also led to fewer people being released from jail following a court appearance. Every month a few hundred people incarcerated pretrial are released from jail after going to court because they either plead guilty and are sentenced to time served or the charges are dropped. In April, 38 people were sent home from court, a 92% decline from April 2019. 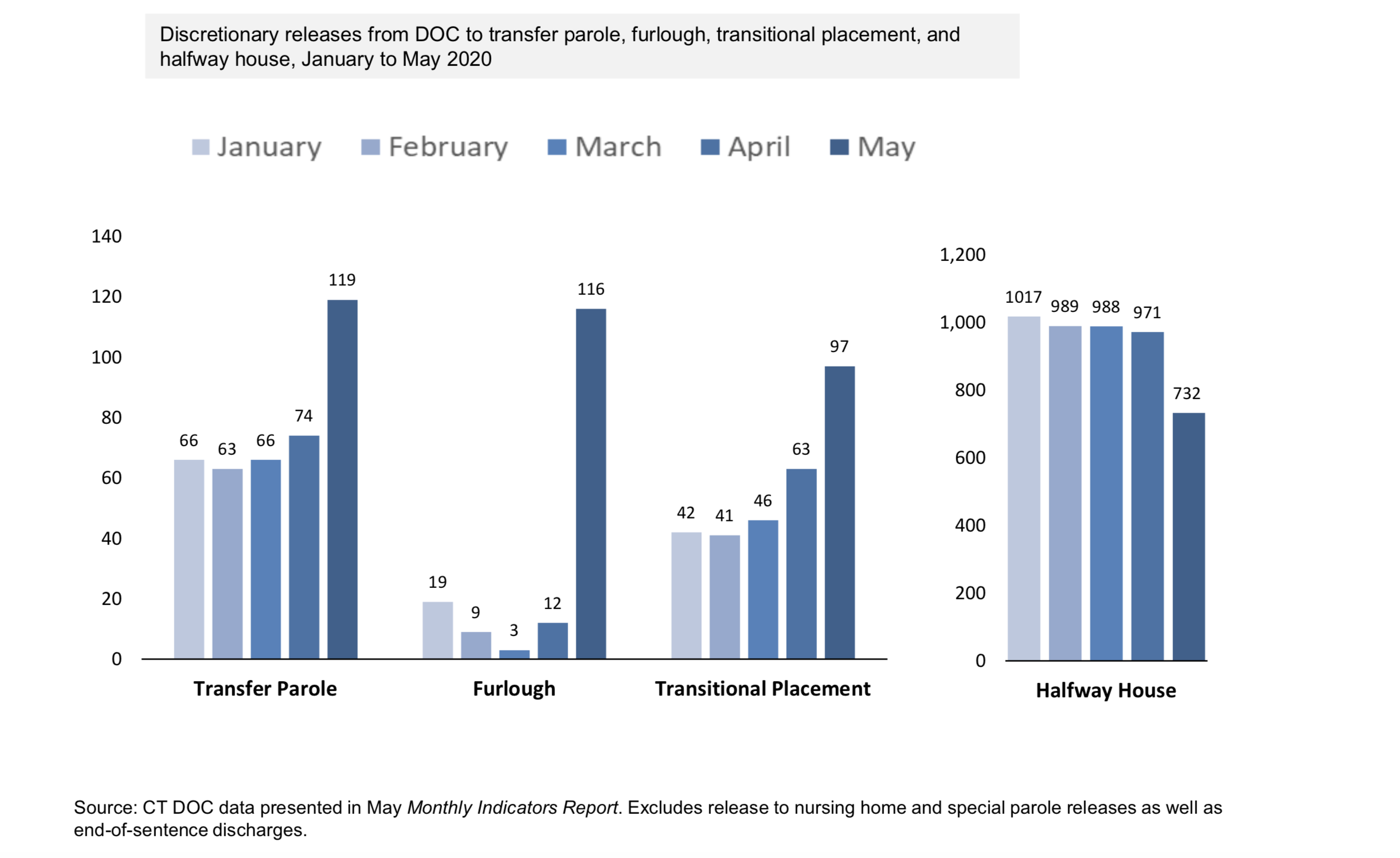 The above figures are the number of people on discretionary releases, by type, as of the first of the month.

Furlough and transfer parole releases up, use of halfway houses down

DOC Commissioner Rollin Cook can release inmates from prison on funeral, medical and reentry furloughs. The temporary leaves are up to the commissioner’s discretion, and aren’t often granted. But there were significantly more people on furloughs on May 1 compared to the prior month.

According to the latest indicators report, Cook released 119 incarcerated people on furloughs in April. In March, he issued 15 furloughs. In February, zero.

As of May 1 there were 119 people on transfer parole — when an inmate has been approved for parole and is within 18 months of their parole release date —  a significant increase from the 74 people on that form of parole on April 1. Board of Pardons and Parole Chairperson Carleton Giles said the increase was an intentional effort to release people approved for parole more quickly, to give the DOC more space for social distancing.

There were 732 people in halfway houses as of May 1, more than 200 fewer than there were the previous month. According to the monthly indicator report, 39 inmates were released from prison to halfway houses throughout April, a 78% decrease from the month prior. Cook said the department intentionally reduced the number of inmates it sent to halfway houses to give officials time to quarantine sick residents and develop plans for the coming months of COVID-19.

“This is one of those unseen efforts and challenges that that we face in managing our population during the pandemic,” Cook said.

“As long as the courts operate at minimal levels, we expect to eventually see a decrease in overall discretionary releases based on the shrinking pool of sentenced candidates,” Cook continued. “We continue to focus… on releases and the moving of eligible and suitable offenders into the community and into the halfway houses or into their own residence.” 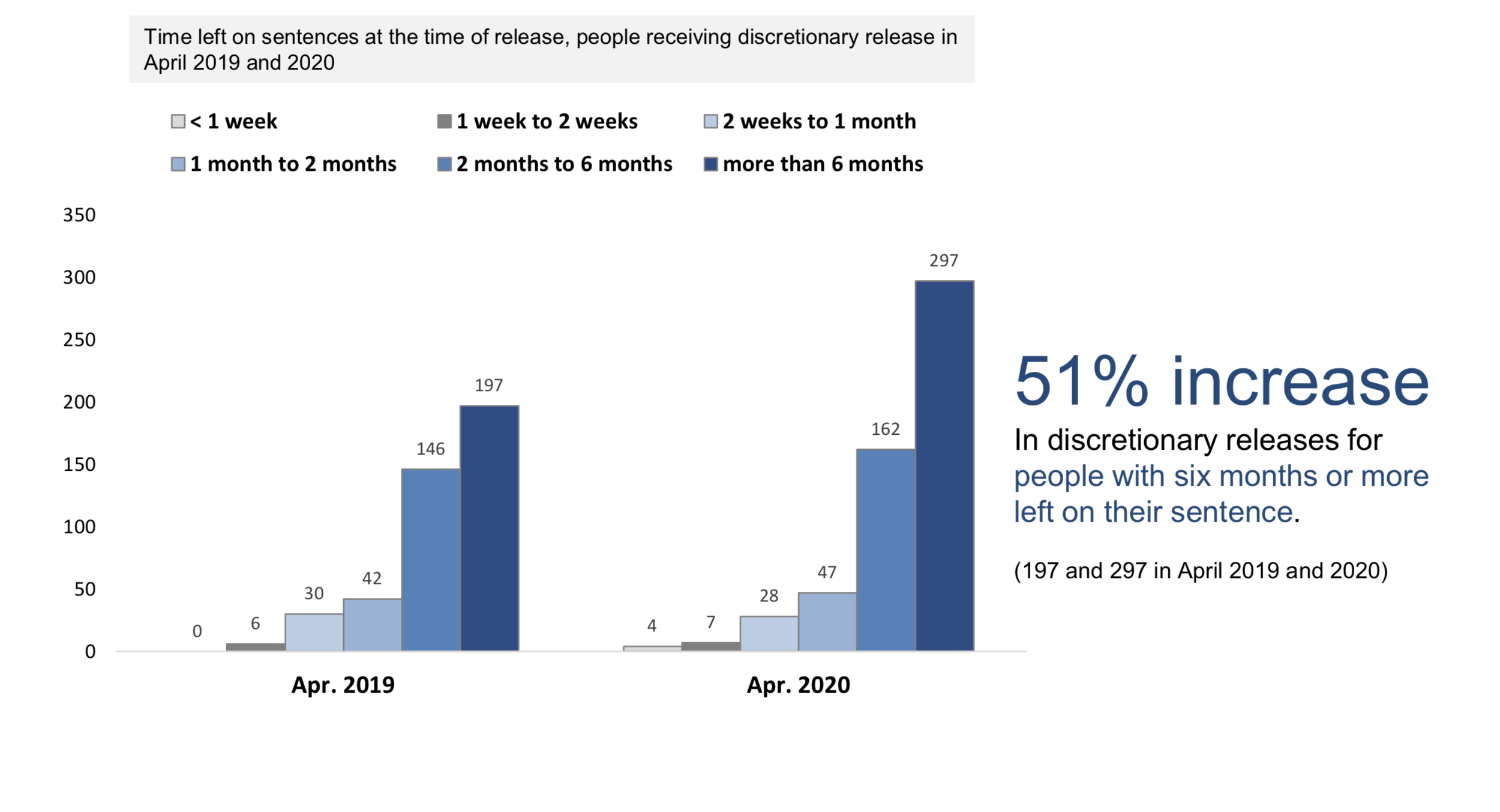 Discretionary releases up for those with more time on their sentences

Almost 300 people released at the state’s discretion had six months or more remaining on their sentence, a 51% increase from April 2019. In total, 545 people were granted discretionary release in April, meaning the bulk of people were released with some form of community supervision.

“I think that paints a positive picture of efforts within the DOC, with criminal justice agencies, to do the early assessment using the validated risk assessment efforts, and to pair people with the supervision strategies needed upon release,” said Pelka.

The department’s Community Release Unit — which assesses the bulk of discretionary releases each month — reviewed 522 cases in April, more than half of which they approved. The unit reviewed fewer cases in April than it did in February and March, when workers assessed 665 and 768 cases, respectively.

The ACLU of Connecticut tweeted that the department’s “discretionary release numbers aren’t extraordinary, despite the extraordinary threat of COVID-19.” The group analyzed the past decade of monthly indicator reports and found that the Community Release Unit’s April 2020 releases were the fifth highest of the last three years, and the 58th of the past ten.