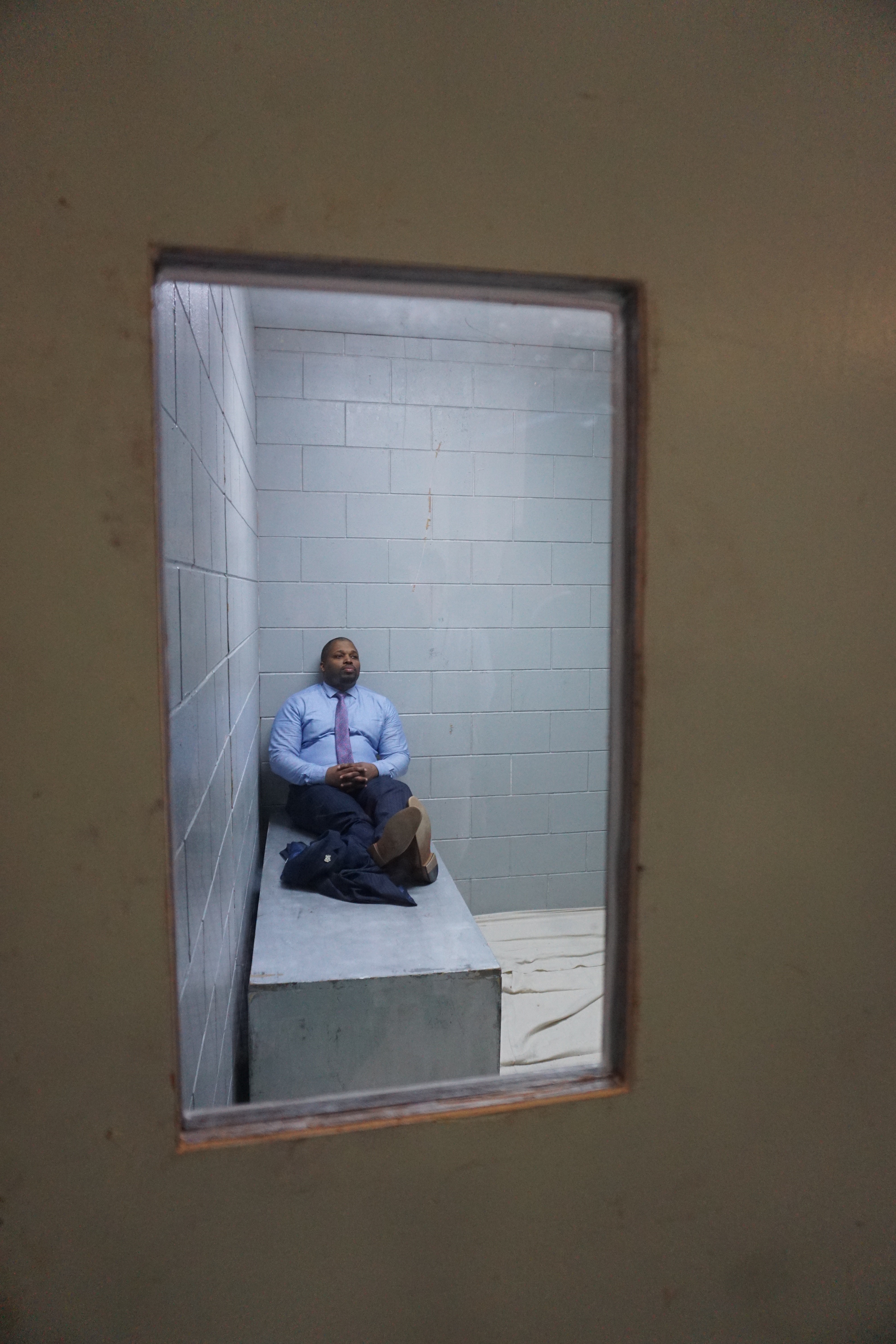 Sen. Gary Winfield has championed criminal justice reforms since taking office in 2009. In this file photo, he sits in solitary confinement — in the lobby of the Capitol — while protesting the use of this punishment in prisons.

This article was updated at 12:15 with information from Wednesday morning’s press conference.

Sen. Gary Winfield proposed “Clean Slate” legislation today that significantly expands the bill championed by Gov. Ned Lamont earlier this month by automatically clearing most misdemeanors and low level felonies for those who have served their time and remain conviction-free for roughly seven years.

“I think we should be figuring out how we do Clean Slate for everybody,” said Winfield, a New Haven Democrat and co-chair of the Judiciary Committee.

While some of the final details still are undecided, Winfield’s proposal would provide relief to nearly four times as many people as the one offered by the Lamont administration.

“I don’t want to wholesale throw out the governor’s bill. I don’t think that’s a smart way to go. But I do want the bill to really do something.”

Winfield’s measure retains the spirit of Lamont’s proposal, however. It would still automatically clear certain criminal records, require the Board of Pardons and Parole to receive training on the collateral consequences of a criminal record and includes an anti-discrimination clause to protect those whose criminal records have been expunged. And, like Lamont’s, Winfield’s bill tentatively requires people to remain conviction-free for seven years to be eligible for automatic erasure, but would also include language to ensure individuals don’t have to wait an unduly long time to get their records expunged after they completed their time under state supervision.

“I don’t want to wholesale throw out the governor’s bill. I don’t think that’s a smart way to go,” Winfield said. “But I do want the bill to really do something.”

Winfield’s bill would also expunge a wider array of crimes than Lamont’s, which would apply only to low-level misdemeanors, much to the chagrin of advocates. Winfield’s would include all misdemeanors, except those related to family violence, and Class C, D and E felonies, which are crimes like second-degree larceny and assault, and carrying a dangerous weapon. Felonies would be subject to “provisional erasure,” which means law enforcement could see the convictions for several years before they were completely erased.

“I think [this] makes it a much stronger bill,” Winfield said of the additions, “and something that I think advocates and people who’ve been through this will feel is worth fighting for.”

Winfield formally announced his plans during a Wednesday morning press conference, where reformers gathered in a crowded room to voice their support for a bill that would expunge all records.

“If a Clean Slate discriminates then it is guilty of doing the very thing we are trying to remedy,” Tracie Bernadi, an ACLU Smart Justice leader who served 23 years in prison. “There should be no carve outs.”

Winfield reiterated at the news conference that he supports Clean Slate for all, but said he is trying to foster a meaningful discussion that takes into account the realities of a short legislative session.

“I am trying to engage in a conversation that is thoughtful and is realistic,” he said.

Those convicted of felonies and misdemeanors can currently petition the Board of Pardons and Parole for expungement after three or five years have passed since their disposition, depending on the conviction. But the application requires people to have extensive memories of their crimes, and can be so complicated that individuals must hire a lawyer to help them complete the paperwork.

“The pardon process is onerous, long and unnecessarily complicated and costly,” Bernadi said. “With all the hoops and hurdles the pardon process has, it’s like asking people with a criminal record to be re-tried.”

Advocates say a broader policy would help eliminate discrimination those with criminal records face when they apply for jobs or housing.

“The person has paid their debt to society,” said Anthony Bennett, pastor of Bridgeport’s Mt. Aery Baptist Church and co-chair of CONECT, an organization that played a key role in fighting for a Clean Slate bill that died last session. “It would benefit Connecticut and the citizens of Connecticut to have full participation of citizens who have paid their debt to society.”

Whites are under-represented in the criminal justice system. They make up about two-thirds of Connecticut’s population, but accounted for just 40% of the top felony convictions in 2019, and 46% of the most common misdemeanors. Hispanic and blacks, meanwhile, are a combined 29% of Connecticut’s population, but made up almost 53% of the top misdemeanor convictions and 58% of felonies in 2019.

Bennett said CONECT is glad Lamont has started a conversation on Clean Slate this legislative session, but there’s more work to be done to ensure it benefits as many people as possible.

“We want to broaden it because it includes a greater population of returning citizens,” he said.

“I am thankful that the governor engaged in this conversation because quite frankly he did not have to,” Winfield said at the news conference. “But the voices that you are hearing here are directing this conversation.”

Marc Pelka, the governor’s under secretary for criminal justice policy and planning, said Monday that Lamont’s bill was intended as a first step that lawmakers could build on in future years once the technology was in place to automatically expunge eligible records.

The administration has shopped the governor’s proposal to the Coalition Against Domestic Violence and the Alliance to End Sexual Violence and new Chief State’s Attorney Richard Colangelo, all of whom supported the bill, Pelka said.

Lamont has not seen Winfield’s proposal, Pelka said, but will work with him once he reads a draft. The administration will try to find common ground and then re-approach those who will be key to Clean Slate’s passage this session. 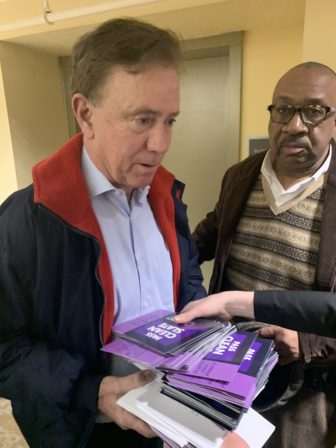 Gov. Ned Lamont is handed 805 letters showing support for a Clean Slate bill broader than the one he proposed to lawmakers.

“The governor’s aspirations always were [for this] to be a bipartisan bill,” Pelka said. “We’re trying to meet with both House and Senate Republican leaders, as well as legislators on the Judiciary Committee on the Republican side.”

As Pelka was doing research for Clean Slate, he came across information that underscored the permanence of a criminal record: State police keep criminal convictions, even misdemeanors, on file for 110 years after a person’s date of birth.

“That spoke to me about the human element of all this,” Pelka said. “People are dynamic, they change, they atone, they rehabilitate, they grow.”

To Winfield, a broader Clean Slate policy would ensure people’s criminal records don’t hold back their lives after they’ve done their time. He isn’t claiming people shouldn’t be held accountable — prison is the punishment for committing a crime, Winfield said, but automatic expungement of eligible records ensures a prison term doesn’t become a life sentence.

“Many of us have told our children, ‘You have to pay your time for your crime,’ right? But the way it works is you pay your time, you come out and you pay because you can’t get housing, you pay because you can’t get a job,” Winfield said. “I think we have to live up to that thing that we told our kids, ‘Yeah, you should pay for your crime, but you shouldn’t be paying 30 years later.’”