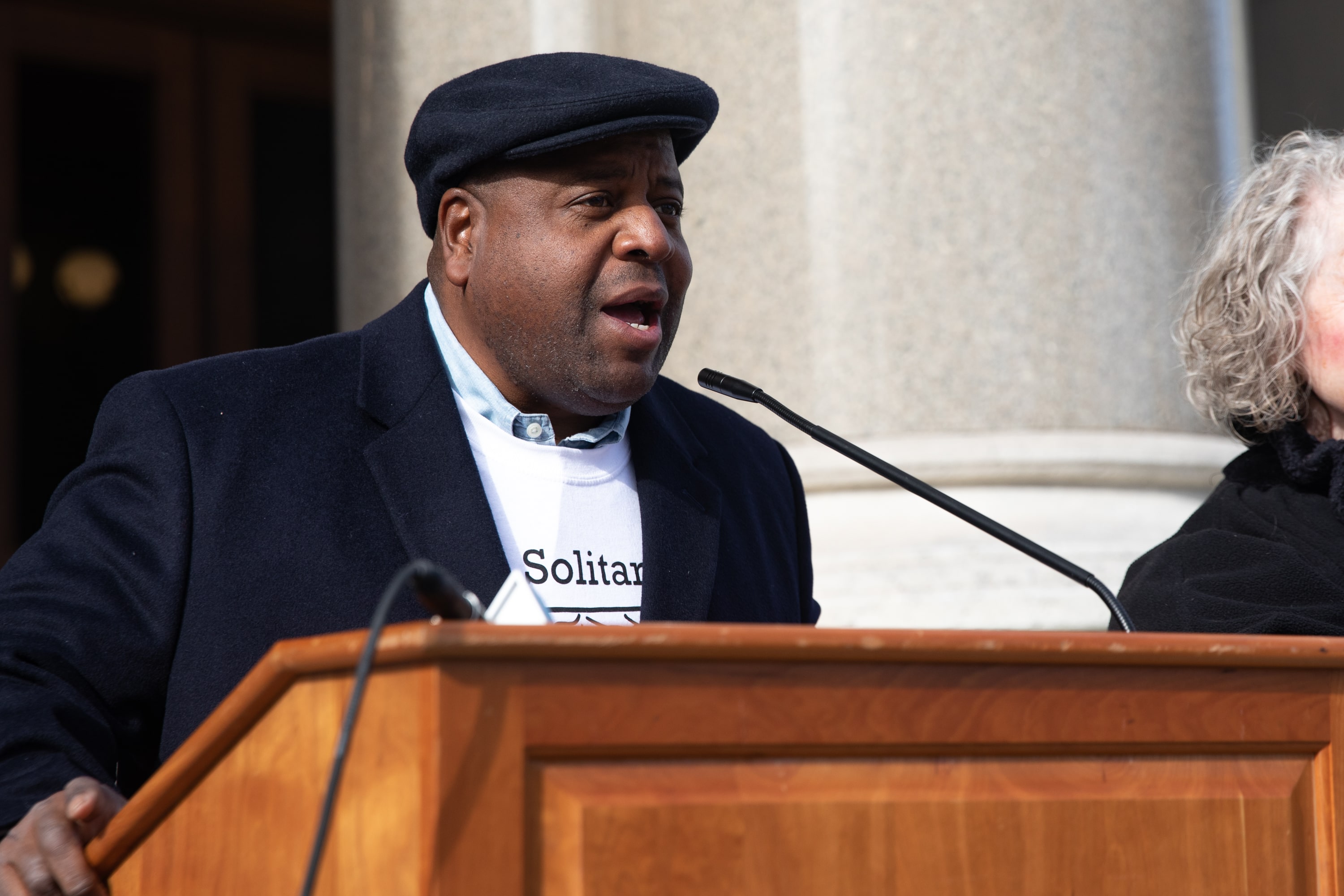 It’s been 20 years, and James Tillman still hasn’t forgotten what it felt like the first time he trudged down the narrow, gray hallways into the bowels of Northern Correctional Institution.

“It was like walking into the circle of hell,” said the wrongfully convicted inmate-turned-activist. “The conditions are so terrible – worse than any animals could be subject to.”

Tillman told his story to a crowd of about two dozen people gathered in front of the state Capitol on Thursday afternoon as he threw his support behind a proposal that will be released this upcoming legislative session.

The measure, the Promoting Responsible Oversight and Treatment, and Ensuring Correctional Transparency (PROTECT) Act, released by Stop Solitary CT, proposes to mostly prohibit the use of solitary confinement in Connecticut prisons, to close Northern, in Somers, and to guarantee incarcerated people a minimum number of free letters, phone calls and visits each month. The group, with support from Judiciary Committee Chair Sen. Gary Winfield, D-New Haven, is pushing to get the bill on the legislative agenda this upcoming session.

“Solitary confinement serves no practical purpose in our corrections system. It is cruel, outdated and really inexcusable,” David McGuire, executive director of the ACLU of Connecticut, said at the news conference. Lawmakers passed a bill in 2017 that ended the isolated confinement of children and mandated the state track its use of the practice.

Stop Solitary CT defines solitary confinement as 16 or more hours in a locked cell except in specific circumstances, like during a facility-wide lockdown, as an emergency response to a serious threat or because an incarcerated person requested it for their own protection.

Data circulated by Stop Solitary CT shows solitary disproportionately impacts people of color. More than three-quarters of people in some form of restrictive housing — a catchall term that refers to all different forms of solitary confinement — were members of racial or ethnic minority groups, as of December 2018.

“When I was in prison I wish there was somebody that was speaking up for me while I was up at Northern. Now that I’m out, I’m committed to speaking for those who are inside.”

PROTECT would go beyond outlawing most solitary confinement in the state: it would also shutter Northern – a facility advocates say isolates prisoners so much that it threatens their mental health – by the end of this year, create a community advisory council with investigatory powers and require the DOC to provide resources to combat officer burnout, which can cause harm to the population they help oversee.

Former warden of the now-closed Gates Correctional Institution, Robert Gillis, said at the news conference that correction authorities do not consciously set out to inflict harm on those entrusted to their care, but because of the policies and procedures they’re authorized to use, like putting people in solitary, they can unwittingly inflict serious damage. And that, Gillis said, puts correction staff at risk.

“They may become complacent to the presence of substandard conditions,” said Gillis, a steering committee member for Stop Solitary CT. “They may abuse themselves by substance dependence, or worse yet, self-destructive behavior by their own self-imposed isolation from family or significant others.”

The Department of Correction said it uses such restrictive housing sparingly. Spokesperson Karen Martucci said in a statement that the department is “leading the country as a correctional system that has minimized a reliance on the use of Administrative Segregation, which is often referred to as solitary confinement.” Currently, less than 0.3% of the overall population is being held in such confinement, she added.

“Nevertheless, the agency is continuing to refine its policies with regards to the amount of time offenders spend in their cells, with an emphasis on increased programming, and educational opportunities, along with family reunification efforts,” Martucci said. “For the safety of all involved, staff and offenders alike, these initiatives must be implemented responsibly.”

Tillman, who estimated he spent four years in solitary confinement and more than 18 years in prisons across Connecticut before DNA evidence exonerated him in 2006, said he still carries with him the trauma the state inflicted upon him.

“It left scars, lifelong scars,” he said. “When I was in prison I wish there was somebody that was speaking up for me while I was up at Northern. Now that I’m out, I’m committed to speaking for those who are inside.”