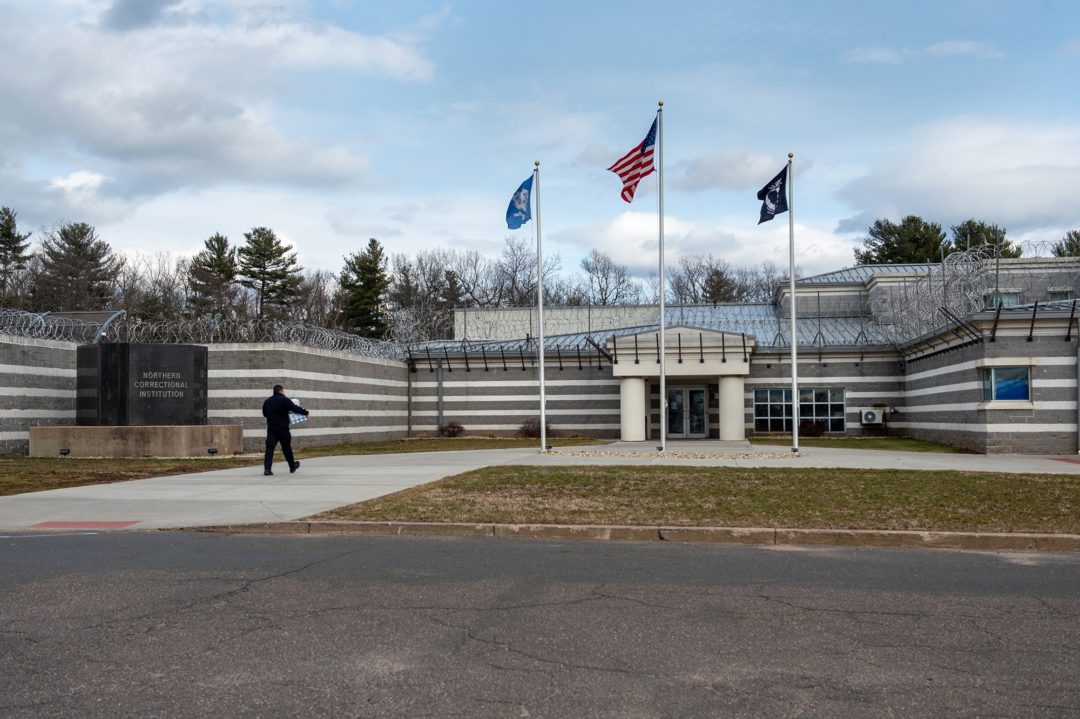 About a decade ago, Sen. Gary Winfield went on a tour of Northern Correctional Institution, the most secure prison in the state. As he walked through the windowless, gray hallways, Winfield’s tour guide seemed “gleeful” at the “marvel of engineering” that was the Somers prison.

What made it such an architectural feat, the guide seemed to think, was the prison’s ability “to break people,” Winfield recalled on a Tuesday afternoon Zoom call.

“Everything that we’ve done, all of the things that we have done, are choices we’ve made. They’re policy choices,” said Winfield, a New Haven Democrat. “We should be doing something about the fact that those are the choices we’ve made and never make those choices again.”

Winfield, the co-chair of the Judiciary Committee, joined the “Justice Reinvestment Coalition,” a group of advocates, prison health care workers with New England Health Care Employees, District 1199 SEIU and mental health professionals Tuesday for a digital news conference calling for the closure of Northern Correctional Institution. The coalition says the $19 million spent annually to run the prison should be reinvested into community supports, to provide equity to communities historically harmed by the justice system and make sure those sent home from correctional facilities are less likely to wind up back behind bars.

The “Justice Reinvestment Coalition” met Tuesday afternoon to demand the closure of Northern Correctional Institution and a reinvestment of its operating costs into community supports that can help keep people out of the justice system.

The use of solitary confinement at Northern has been likened by the United Nations to torture, disproportionately inflicted upon racial and ethnic minorities, considering the racial disparities in the prison.

“The funds saved by closing that supermax prison must be reinvested into the people harmed by the criminal legal system via resources, such as assistance in finding and retaining housing, expanding medical and behavioral health services in the community, funding criminal record erasure so that people reentering have a light at the end of the tunnel, and the creation of a 24/7 mobile crisis unit to respond to people in medical and mental health crisis so that they can avoid the criminalization and incarceration in the first place,” said Claudine Fox, the interim public policy and advocacy director for the ACLU of Connecticut.

It is unclear how much money would be saved by closing Northern. Karen Martucci, the DOC’s director of external affairs, said the bulk of the cost of running a correctional facility is for staff salaries. Corrections staff would not be laid off when a prison or jail is closed.

“Any closure that exists, the staff are absorbed into vacancies around the state,” Martucci said. “The overall savings are not as cut and dried as one might think.”

However, Martucci said reassigning staff to other prisons could cut down on overtime across the system, which would also save the state money.

Department of Correction Commissioner Designate Angel Quiros said in the press conference announcing his nomination to head the agency in September that he foresaw prison closures in the near future, once the DOC weathered the second surge of COVID-19 it is now experiencing. Quiros also previously told CT Mirror that he was supportive of the concept of redirecting money from prison closures.

Northern has been open since 1995, when the state’s prison population was much greater and officials were having a hard time managing behavioral infractions occurring throughout the prison system.

Quiros said the prison provided a space for the agency to hold people who were “creating chaos” in correctional facilities and causing prison riots. But, he said, things have changed.

“I will tell you that it’s been 25 years, and that facility has served its purpose,” Quiros told The Mirror previously. “With the criminal justice reform that’s going on, the agency will have to take a look at what additional changes we need to make, as far as the programs that are housed at Northern.”

Black and Hispanic people are overrepresented in the incarcerated population, and even more so at Northern. As of Jan. 1, they made up 72 percent in prisons and jails across Connecticut, and 86 percent of the people at Northern.

According to the U.S. Census, non-Hispanic Black people make up roughly 11% of the state’s population, while Hispanic or Latino people are almost 17% of residents. Whites make up almost three-quarters of Connecticut’s population.

There were 82 people held at Northern as of Jan. 1. Its population has tumbled since the 1990s and 2000s. At one point, the level-five maximum security facility could hold up to 584 prisoners.

“Northern is a place primarily filled with young men of color,” Barbara Fair, a steering committee member of Stop Solitary CT, one of the groups leading the charge to close the prison, said on Tuesday’s Zoom call. “They’re sent there to break their spirit, to shatter their minds and to reduce them to broken men who face a lifetime of scars from that torture.”

Others spoke of the need for housing services and employment to ensure those who leave prison or jail obtain critical services that help keep them out of future entanglements with the law, as well as the need for added funding for mobile crisis units to safely de-escalate situations where people are in a mental health crisis.

Prison health care staff who participated in the Zoom call called for an infusion of money to improve medical care behind bars. Correctional facilities’ health care system has long been strained, in part by vacancies in positions across the state. Indria Mitto, a medical discharge planner at Osborn Correctional Institution, said budget cuts have made it harder to make sure each inmate sent home has what they need for discharge, including a 30-day supply of medication, medical appointments with community providers and an active health insurance plan.

“Over the last several years, discharge planning has been cut to the bone, along with other critical medical and mental health services for offenders,” Mitto said, explaining she has seen people commit more crimes just so they can “have their basic needs met.”

Another priority of the reinvestment coalition is funding for a “Clean Slate” bill, which would automatically clear a person’s criminal record if they remain conviction-free for a set period of time.

“All people, including those who have been incarcerated, should have an equal opportunity to contribute to society and build a successful and fulfilling life,” said the ACLU of Connecticut’s Kelly McConney Moore. “Right now in Connecticut, people who were sentenced to months or years are actually serving life sentences, because society brands them with their records forever. Clean Slate, if properly funded, is a light at the end of the tunnel, promising people that they will one day be able to live record-free.”