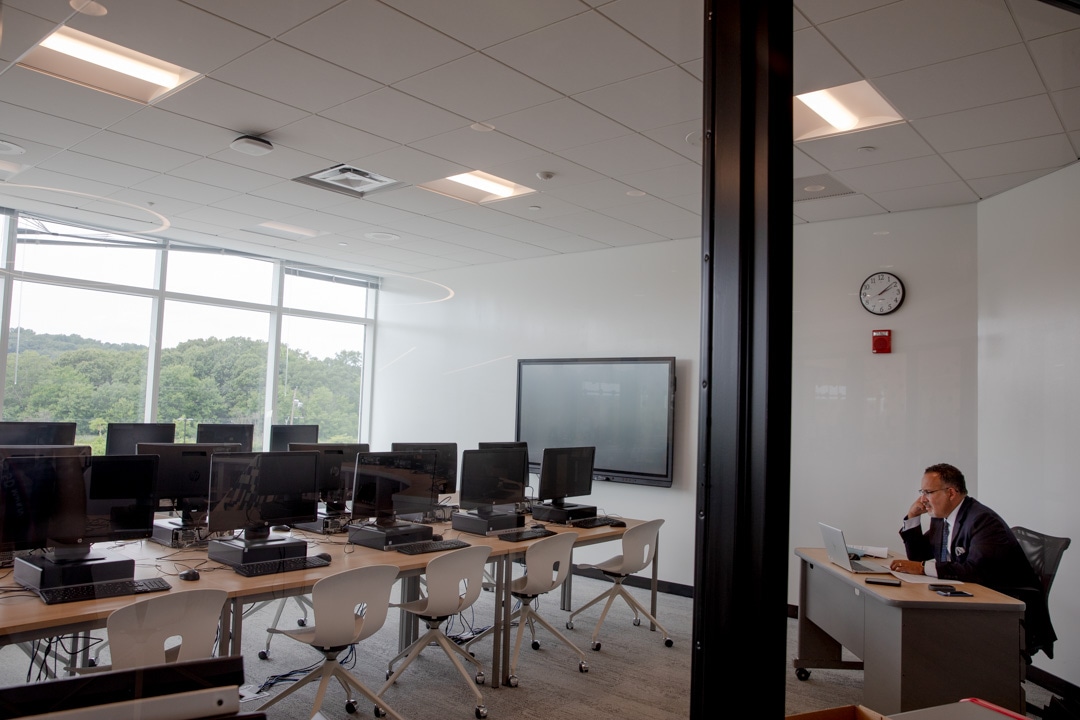 Outgoing State Education Commissioner Miguel Cardona has an online meeting in West Haven High School shortly after a press conference in July to urge districts to open for in-person learning for the 2020-21 school year. (CT Mirror)

Connecticut students have missed nearly as many days of school in September as they did in December, recent data show, despite efforts to better engage the most vulnerable.

During the week of Jan. 19-22, nearly half of the school districts in Connecticut were operating under a fully in-person learning model; 32.5% were hybrid, and 17.8% were fully remote.

The numbers have fluctuated throughout the school year due to a rise and fall of COVID-19 cases among students and teachers as well as staff shortages. Some of the larger school districts such as Hartford started the school year with in-person learning but switched to hybrid learning during the winter. New Haven recently reopened its doors for the first time since March with hybrid learning for specific students but most remain remote.

The decision to stay open or closed is left up to district leaders, which has frustrated some — especially advocates for the state’s most vulnerable students who face additional challenges when having to learn remotely. They recently have called on the state to look further into how these students are accessing education right now.

Gov. Ned Lamont and the state Department of Education have guided and pushed for districts to keep schools open for as long as they can throughout the school year, hoping to avoid a repeat of last spring when a quarter of students statewide lost out on learning after the pandemic shut schools down in March.

“We recognize that, in many cases, having to go remote is needed, and we’re not certainly against that. But … we’ve learned that the first several months of school have been positive for so many of our students who have had the opportunity to go in,” outgoing Connecticut Education Commissioner and President Joe Biden’s nominee for U.S. Education Secretary Miguel Cardona said in November.

In a recent interview with WNPR, Cardona talked about Connecticut setting up data collection early on and how having this process is important “to not only target our efforts toward those neediest students and communities but also to get a better sense of where we are as a nation in terms of reopening our schools.”

Centers for Disease Control and Prevention officials released guidelines this week that support reopening schools for in-person learning as long as safety precautions are being met in school buildings and surrounding communities.

In an opinion piece for the Journal of the American Medical Association published Tuesday, CDC experts wrote the “preponderance of available evidence from the fall school semester has been reassuring insofar as the type of rapid spread that was frequently observed in congregate living facilities or high-density worksites has not been reported in education settings in schools.”

Lamont’s administration has echoed the CDC guidance, saying they’ve found that most student and staff infections are happening outside of school.

As of Thursday, 1,060 new positive COVID-19 student cases and 209 new staff cases were reported in Connecticut. An analysis by the CT Mirror of a second state dataset breaks down what cases looked like per 10,000 students in December — the majority of the cases reported were from students in hybrid or fully remote learning models.

“I was sort of intrigued to see the CDC, Centers for Disease Control, rolled out reflective of what we’ve been saying for quite some time, that schools are not a driver of transmission,” Lamont said during a Thursday press conference. “You’re less likely to pick up the virus at school in the classroom where you’re wearing a mask than you are in the greater population.”

Although officials from the state’s Department of Public Health warned school superintendents this week about the potential threat the COVID variant could have on closing schools this spring, Lamont said on Thursday that he believes the vaccines will be ahead of risks of the highly contagious strain now appearing in the state.

“I’m fairly confident that if we continue our flow of vaccines, they continue to up the ante, we’re going to be having school in March.”