School districts told to apply for $443 million for COVID aid 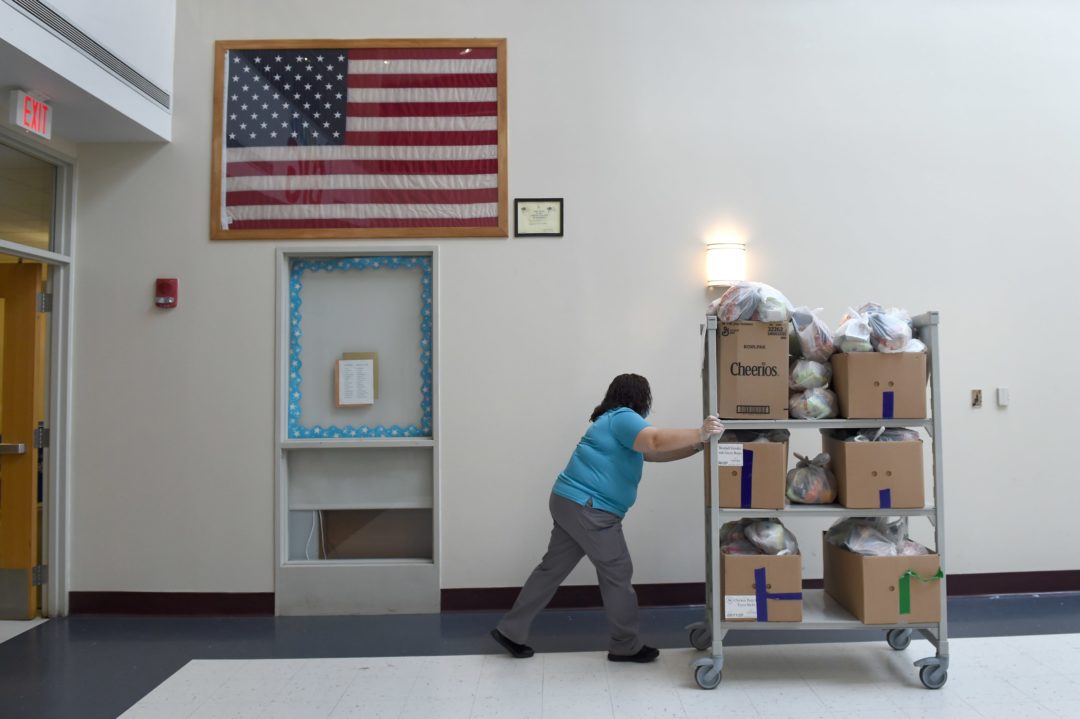 A worker rolls a cart stacked with boxes of pre-packaged frozen meals for the Hartford Public Schools Food & Child Nutrition Program at the Burr School distribution site in May. About 7,000 bags holding several meals each are distributed at 17 schools throughout the city on Mondays, Wednesdays and Fridays to fill the void left by school closures due to the COVID-19 pandemic.

Schools district officials throughout Connecticut were informed Friday how the state plans to divvy up the bulk of the $520.7 million the state will receive to help schools with the additional costs of teaching during the pandemic.

The state plans to funnel $443.2 million to local districts, the minimum Congress required Connecticut to send to local districts when it passed the legislation in late December. Of the remaining emergency funding for education, $15.8 million must go to help non-public schools here and the rest — $61.7 million — the state has wide discretion over, though it must be spent on education. The administration of Gov. Ned Lamont has not yet announced how it intends to spend that money.

The money announced Friday is largely being funneled to the state’s largest districts, which have seen attendance suffer the worst during the pandemic and are much less likely to be offering their students the opportunity to attend school in-person and full-time, compared to their neighboring suburbs.

To receive the money, districts will need to apply to the Connecticut State Department of Education and were encouraged Friday to include things like “high dosage small group tutoring” during or after school, longer schools days, and expanding access to summer school to help students who have fallen behind during the pandemic.

“The CSDE recognizes that the pandemic has exacerbated disparities that already exist,” the state guidance reads. “It is our collective responsibility to address our challenges through an equity focused lens.”

This funding is for programming this coming summer and next school year and is about four times the amount of aid school districts received from the federal CARES Act last year after COVID-19 shut down schools unexpectedly.

The state guidance does not indicate schools will need to reopen or offer students more in-person instruction to receive the funding. State data show that 18% of students are attending school entirely remotely, and another 18% are in attending in-person for fewer than one-in-four school days. Students from low-income families, English learners and those experiencing homelessness are much more likely to be learning remotely — and missing much more school.

Former U.S. Department of Education Secretary Betsy DeVos, in what was likely her last letter to state education commissioners, urged states to use the money to reopen schools.

“I urge you to use the ESSER and ESSER II funding to safely re-open all elementary and secondary schools as soon as possible, to restore and maintain high-quality learning environments, and to take comprehensive action to mitigate the unprecedented learning loss that many of our most vulnerable students have endured,” she wrote. “Most of our children today would be far better off in school with in-person instruction. There is no excuse that so many of them are still locked out. Families and students, particularly our nation’s most vulnerable, are depending on your leadership.”

The cost for schools in Connecticut this school year to follow the Centers for Disease Control and Prevention’s COVID-19 mitigation strategies — and ensure that schools can reopen or remain open — has an estimated price tag between $280 million and $310 million, the federal agency estimates.

That’s roughly $584 to $743 per student to pay for things like having a protective shield at every desk, four hand sanitizer dispensers in every school, and additional custodians and bus routes. Connecticut is slated to get roughly $852 per student with this new influx of money, according to estimates from the Learning Policy Institute.

As local municipalities struggle with their budgets, it is unclear whether these additional dollars can be used for local officials to cut their contributions towards education. While state law requires towns to set aside at least the same amount as they budgeted for in the current year, it also provides most districts several opportunities to reduce their contributions.

The guidance that was released Friday by the state listed an allowable use of the federal funding to go towards “continuing to employ existing staff of the local educational agency.”

On Monday, a spokesman for the state department of education said that local municipalities can’t use this money to cut their local share, but “their regular operational costs, not related to COVID, are not reimbursable under ESSER II.”

Regardless, U.S. Rep. Jahana Hayes said schools across the country and in Connecticut are heading for massive reduction in school staff.

“Connecticut is expected to lose at least 9.6% of its education workforce – resulting in nearly four thousand critical job losses to the state’s public education system,” she said last week in a press release when announcing her proposed legislation, Save Our Education Jobs Act, that would funnel money directly for retaining staff. “Many of these jobs include education support staff. These professionals help to provide mental health services for students, deliver nutritious meals and health care, transport students to school safely, clean and sanitize schools, and contribute to social and emotional learning. These jobs must be protected to ensure schools remain the same robust and holistic centers of learning on the other side of this pandemic and recession.”

According to an analysis by the CT Mirror of school staffing levels during the last recession, public schools across Connecticut shed nearly 1,300 jobs. More than half of those positions were held by teachers and the instructional specialists they work with. Those reductions – 1.5% of the K-12 workforce statewide – were somewhat blunted by federal stimulus dollars that infused $540 million into Connecticut’s coffers to replace the 14% cut in state education aid.