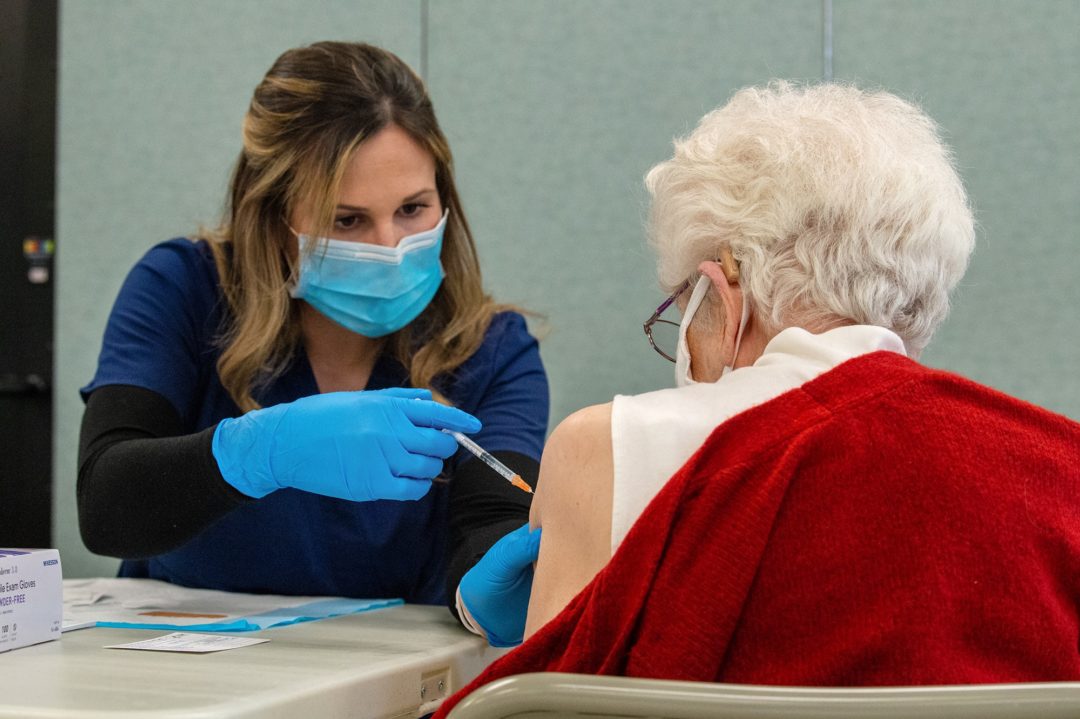 Mikaela Coady, a physician assistant with Priority Urgent Care of Ellington, gives Lea Trombley, 90, of Vernon, a first dose of the Moderna COVID-19 vaccine at a clinic at St. Bernard Church in the Rockville section of Vernon Thursday, Jan. 28. The one-day clinic was set up in partnership with the town of Vernon in an effort to reach out to the community to make it easier for seniors age 75 and over to get the vaccine. They dispensed 100 doses.

A large group of elderly residents are scrambling to find clinics where they can get their second vaccination shots after two hospitals in Eastern Connecticut abruptly canceled their appointments this week.

The Eastern Connecticut Health Network, which operates both Manchester Memorial Hospital and Rockville General Hospital, made the decision to “pause” first-dose vaccination clinics because they weren’t getting enough doses from the state and to cancel any second-dose appointments that had not come through their systems originally.

The move has caused a major backlog for second shots and has left people with waiting times as long as 55 days — well past Centers for Disease Control and Prevention guidelines — to get their second doses.

Eaton said he has received several calls from residents panicked that they could not schedule their second doses of the Moderna vaccine. Eaton said many of them went to Johnson Memorial Hospital in Stafford Springs for their first dose and were told to go back into the federal vaccine system, VAMS, to schedule a second-dose appointment rather than having it scheduled right then.

Eaton said because Johnson Memorial is the only hospital in the area, its clinics booked quickly, and people discovered on VAMS that they could make second-dose only appointments at either Manchester to Rockville General Hospitals even though they didn’t get their first doses there.

But on Monday, the two hospitals announced they were halting vaccine clinics.

The two hospitals have given about 7,000 first-shot vaccinations, according to ECHN’s President of Business Development Dan DelGallo. They have also given about 3,000 second doses.

Delgallo said they will complete the roughly 4,000 second doses for people who received their first vaccinations at either hospital.

“If you received your first dose at either Manchester or Rockville General, we will honor all of those second-dose appointments even if VAMS tells you it has been cancelled,” ECHN spokeswoman Nina Kruse said. “The date you received to get your second dose after your first shot was completed will be honored.”

DPH spokeswoman Maura Fitzgerald said that the state’s vaccination team has been working with the two hospitals to determine who needs the second shots and to find alternative scheduling for them if necessary. State officials believe about 150 people will need to be rescheduled, although DelGallo said he couldn’t confirm that number.

“We are working collaboratively with them (ECHN) to help with rescheduling issues,” Fitzgerald said. “They have been very good partners, and we are working with them to ensure everyone gets their second doses.”

Many of the people whose first-dose appointments were cancelled this week ended up Wednesday at a clinic at the Eastern Highlands Health District, which serves some of the same communities as ECHN. More than 100 people signed up for their first dose overnight, causing long lines and some short tempers at Wednesday’s clinic in Mansfield, Eastern Highlands Health District Director Robert Miller said.

“The timing of all these cancellations and our proximity to that health care provider resulted in a surprise to us. One hundred people signed up overnight, and we didn’t discover that until the morning of the clinic,” Miller said.

“We had to do some real scrambling to get more vaccinators and move the queue indoors, because having people with mobility issues standing in long lines is not ideal.”

In its press release announcing the suspended clinics, ECHN officials said that people could go back into the VAMS system and find other appointments for their second doses only.

That has proven to be problematic, Eaton said.

“If you go into the system and try and pick a clinic within 50 miles, there is zero availability for these second doses,” Eaton said. “The only place around here is Johnson Memorial, and they are booked up for months.”

Colleen Berment Langer discovered the waiting list at Johnson Memorial Hospital firsthand when her 80-year-old husband tried to schedule his second dose appointment there. He received his first vaccine at the Somers hospital on Jan. 18.

But she said he wasn’t allowed to schedule his second vaccine at the clinic that day and was instead told to schedule it through VAMS. He scheduled it for Feb. 22 but then wondered if he could get a quicker appointment elsewhere and canceled it.

Given the shortage in the second dose vaccine market in Eastern Connecticut, he found nothing, so he rescheduled at Johnson Memorial for March 10 — 51 days after his first vaccine.

Eaton said many people are frustrated and worried the vaccine will be useless.

“They are going to lose these people whose vaccine is going to expire because they can’t get that second shot, and this is not the group the state wants to lose,” Eaton said.