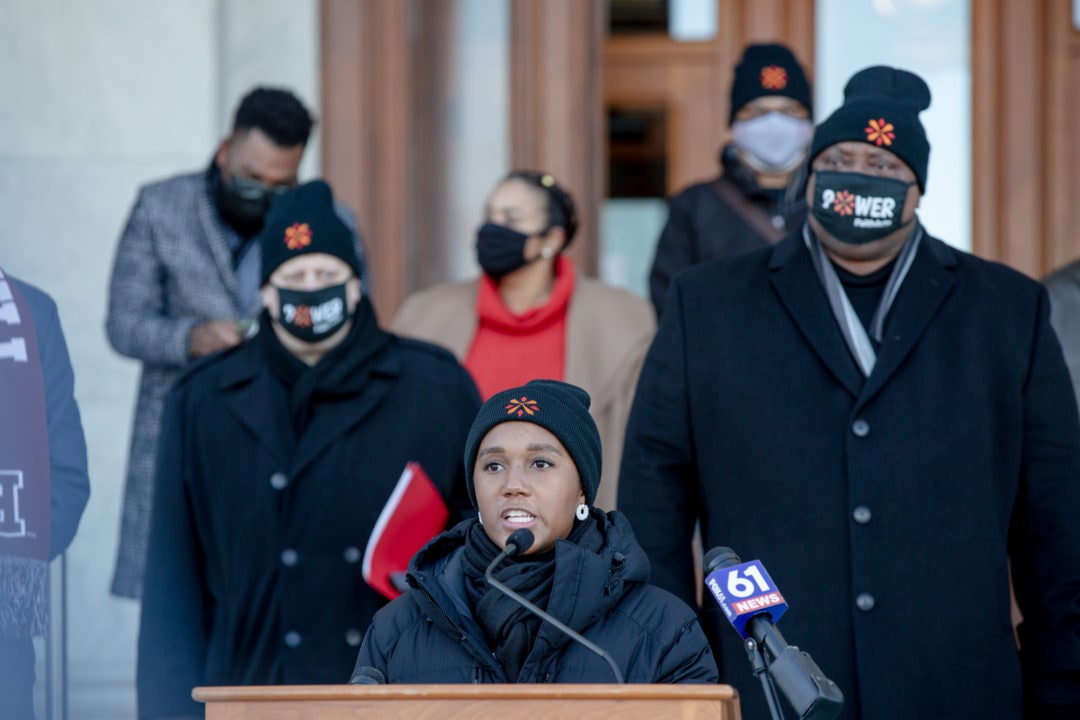 Jamilah Prince-Stewart, Executive Director for FaithActs for Education, speaks at the State Capitol in Hartford. Speakers at the event asked the governor to end education discrimination against low-income children and to end the phase-in for state funding.

The push to get more school funding to the state’s most distressed communities got some prominent backers on Monday: the head of the legislature’s Black and Puerto Rican Caucus and the co-chair of the Education Committee.

“How many times do we have to come up here in the cold? It’s always in February we have to stand out here before these budgets come out. Governor Lamont, I’m looking you in the eye, I’m asking you, imploring you to please, please do what you promised. Take care of our kids,” said Rep. Geraldo Reyes, D-Waterbury, and leader of the Black and Puerto Rican Caucus.

A coalition of advocacy organizations stood alongside Reyes and other state lawmakers outside the Capitol to call on Gov. Ned Lamont and the legislature to adopt legislative proposals that would make changes to Connecticut’s school funding model, in hopes of addressing education disparities.

The state’s Education Cost Sharing funding system is headed for a $40 million a year increase for the next seven years, pending legislative approval or the legislature rewriting the formula. The 10 lowest-performing school districts in the state would get 61% of the additional aid despite those districts enrolling 20% of all K-12 public students in Connecticut. Waterbury stands to gain the most, with $7.1 million more, followed by New Britain, which will get an additional $3.9 million.

But rather than continuing to phase-in ECS funding over the next seven years, advocates on Monday called on the governor to fully roll out the increases by fiscal year 2022, arguing that a child who is in fifth-grade now would graduate from high school before seeing the full benefit of the increases. 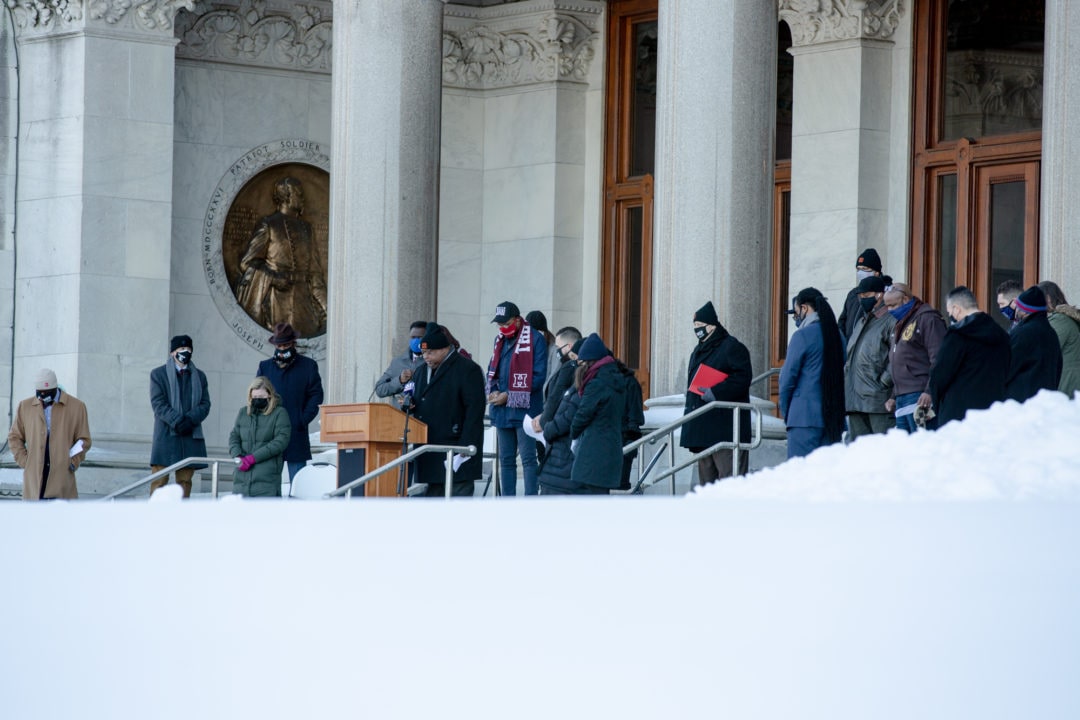 Community leaders and legislators pray as the press conference starts at the State Capitol on Monday.

“We’re calling on Governor Lamont and the legislature to close the education funding gap by $420 million, this legislative session, and we reject the notion that we’re asking for too much money or the cost is too high,” FaithActs for Education Executive Director Jamilah Prince-Stewart said on Monday. “Tell that to the grandma trying to keep the lights on, food on the table and the internet stable while her grandchild is remote learning. Tell that to a father paying for collect calls from a prison instead of watching his daughter graduate from college. Tell that to… two mothers in New Haven within a week, they have to bury their sons instead of watching them open up their first businesses.”

The proposal would also increase how much additional aid school districts receive for each English learner they enroll. Also, districts that have at least 60% of their students coming from low income families would receive extra help, too, compared to the current 75% threshold.

The state’s per-student rundown shows New Haven spends $18,142 per student compared to almost identical amounts in neighboring Orange and Woodbridge, two communities whose students have demonstrably fewer needs because of housing policies that make it unaffordable for lower-income residents to live there. In Bridgeport, $15,329 is spent on each student, compared to $19,160 next door in Fairfield and $22,623 in Westport.

“We need some really big changes here in the state of Connecticut,” said Rep. Robert Sanchez, D-New Britain, and co-chairman of the education committee. “I promise you that I’m going to look at these new formulas, look at these new proposals, and we’re going to have to come up with something that is going to be attainable and that we can do now and not wait seven or eight years down the road.”

Lamont said during a Monday press conference that he’s not sure changes will be made to the school funding model, but he will be proposing that the state “absolutely honor the ECS formula that the legislature put in place now a few years ago, which does increase the amount of funding that goes to those most distressed schools, over a period of time.”

Religious leaders also met with top Democratic legislators and the governor in December to call out the “racist and classist” way the state funds the struggling, segregated schools in their neighborhoods. One suggestion made during that conversation is for the state to pass property tax reform to solve the problem.

Additionally, the state’s superintendents association, a powerful lobby at the state Capitol, released a report in January calling on lawmakers to improve the current funding trajectory, suggesting the state build in a 2.5% annual increase in spending for public schools.

“If we’re going to redo the ECS formula, I would only do it if it’s bipartisan,” Ritter said at the January meeting. “So it’d be Republicans and Democrats together doing it, not a one-sided approach.”