As problems continue with federal vaccine system, more and more vaccinators turning to other ways to fill clinics 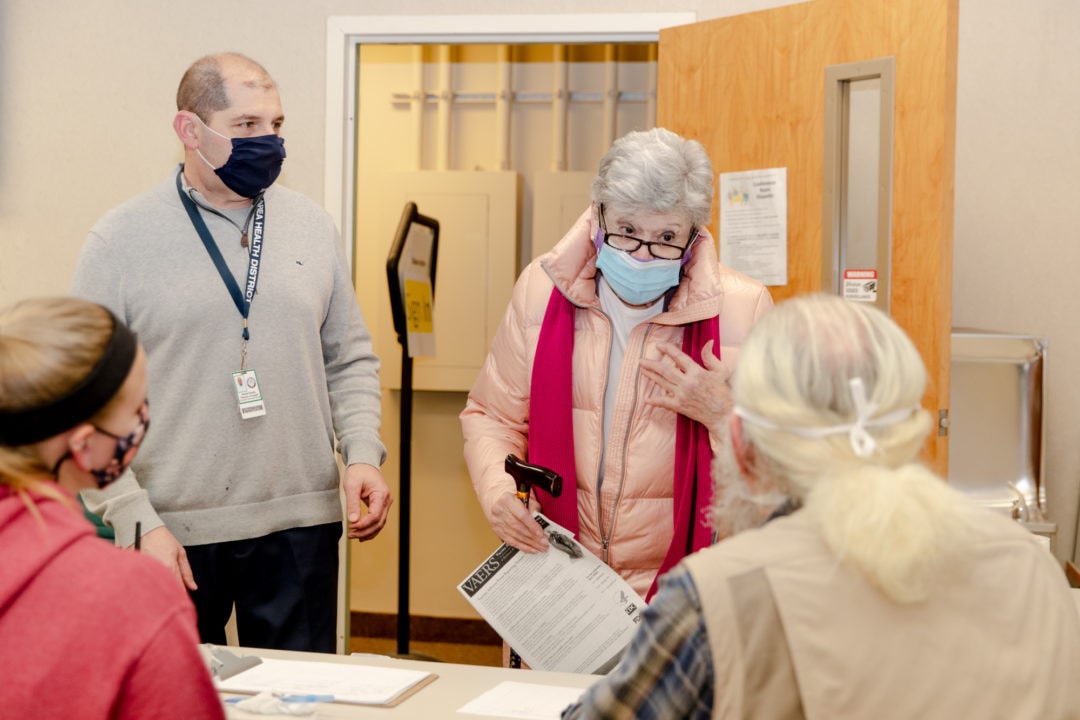 Residents of Bloomfield and West Hartford will soon be able to schedule their vaccine appointments through a phone call to the local health department as the district becomes the latest to figure out a way to avoid the online federal vaccination system known as VAMS that has vexed many senior citizens.

West Hartford/Bloomfield Health District Director Aimee Krauss said she has purchased her own electronic health records system. Once it’s set up, people will be able to call 860-561-6998 and be scheduled for an appointment. Until then, they are being placed on a waiting list.

Krauss said her department received many calls from frustrated seniors unable to navigate the federal Vaccine Administration Management System, or VAMS, which requires a person to have an e-mail address. She decided the towns would be better served going on their own.

Krauss is just the latest to eschew the VAMS system.

About 35% of vaccination clinics across the state are signing people up through something other than the federal system, according to an analysis by the Connecticut Mirror. The state has about 140 approved clinics as of Tuesday morning.

The result is a potpourri of options but a potential lack of coordination.

Union First Selectmen David Eaton experienced that first-hand recently when many of his residents had their second dose appointments abruptly canceled by two local hospitals.

“The whole system needs to be better coordinated by the state,” Eaton said. “Some clinics aren’t listed in VAMS at all. Hospitals are using their own systems, so if you aren’t in that, you don’t always know about their clinics.”

Many hospitals are using their own internal electronic health records systems to register people for vaccinations, which is what Stamford Health is doing in partnership with the city’s health department. Gov. Ned Lamont has pointed to Stamford as a city that has vaccinated a large percentage of its 75-and-older population — but since Jan. 18, it has not used VAMS.

“It’s fine to use VAMS when you are uploading your own people, but once we got to the general public, it was clear VAMS was clunky to use for the consumers as well as the providers,” Stamford Health Chief Operating Officer Jonathan Bailey said.

So now, rather than using VAMS, people can call a hotline or go to either the hospital website or the city’s Department of Health website and use an online link.

“Part of the issue with VAMS is that there’s a multi-step process that is challenging for a lot of people to get through,” Bailey said. “We streamlined the process to make it much easier and quicker.”

At his Monday press conference, Lamont said the state is working on a new interface to make it easier for residents to be able to use VAMS.

“So rather than throw it out, I think we’re working on those improvements,” Lamont said.

But the state is already transitioning away from VAMS in other areas. Recently all vaccinators were told to stop using the federal system to order vaccines and instead use a new portal set up by the state Department of Public Health.

The state also is transitioning to having all vaccination data transferred to its own system, called CT WiZ, which has been used for years to track child vaccination records and other vaccine data.

The city with the highest percentage of vaccinated 75-and-older residents is Stamford, which Lamont has pointed out several times when asked why some cities have fallen behind in vaccinations.

The health department was getting so many calls from elderly residents unable to sign up for vaccinations that they eventually created a Google document that residents could use to send their names to the health department, according to the city’s communication director, Arthur Augustyn.

In mid-January, city officials made an agreement with Stamford Health to take over the vaccination scheduling. The hospital uses ZocDoc to register community members for vaccine appointments at the hospital.

Stamford has vaccinated at least 64 percent of its 75 and older population — much higher than most cities.

Stamford Hospital has been doing 700 to 900 vaccinations a day for the last few weeks. Bailey said they are working with the state to establish a mass vaccination site in the city if more vaccines can be obtained.

Krauss said navigating VAMS requires an e-mail address, which has caused “a significant issue with the most at-risk community members — individuals over the age of 75.”

“These individuals are more likely to have difficulties using an email-based system,” Krauss said. “Our local health district is spending a large portion of their vaccine efforts on tech support for seniors, due to the fact that the current system requires an individual to have and know how to use an email address for the system.”

Krauss said the minute the state opened up vaccinations for 75-and-older, her office was deluged with phone calls from elderly residents looking for assistance with getting appointments.

Krauss has been running clinics at least two days a week, one in each town, for over a month and will try to schedule more if the demand warrants it and vaccine is available.

In West Hartford and Bloomfield, the library staffs have been co-opted to help answer the phones and schedule appointments. The system is not set up yet, and anyone calling this week will be placed on a waiting list.

Krauss said six people on that list were called to come to a clinic Monday because they had a few extra doses left over.

While the state is transitioning away from VAMS for ordering and eventually data collection, it doesn’t appear ready to abandon it as a way that people can register for vaccine appointments or search for open spots.

With 65-and-older residents scheduled to be vaccinated soon, the issues with VAMS won’t stop, but once that category is completed, state officials believe more computer-savvy people will be able to use the federal system.

Pennsylvania recently spent more than $800,000 on a private health records system that hasn’t worked and that some counties there are already abandoning.

Connecticut is building a new front-end for VAMS to make it easier for people to identify locations that have vaccine appointments available, Geballe said.

While he didn’t elaborate on the changes, he expects the system to be available in the next couple of weeks.

“In this case, it’s being rolled out first to the most elderly folks who maybe have the greatest challenges using it. So a little bit of a perfect storm there,” Geballe said. “I think we’re through the worst of that.”

Businesses have become mask enforcers. They’re tired of it.

As COVID cases have spiked and the governor resists a mask mandate, shops and restaurants are on their own.