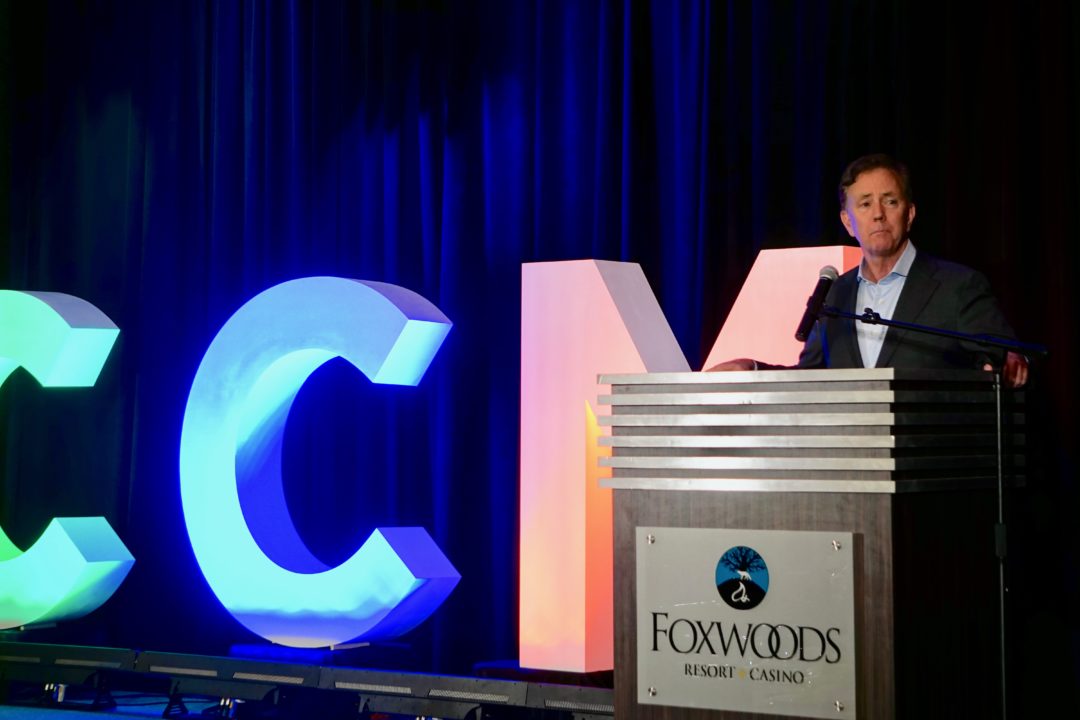 Gov. Ned Lamont speaking to the Connecticut Conference of Municipalities in December 2019.

Connecticut cities and towns gain in the short term but lose out over the long haul in the new two-year budget Gov. Ned Lamont proposed Wednesday.

Using federal coronavirus pandemic relief dollars and state bonding, municipalities would get an extra $320 million next fiscal year and $220 million more in 2022-23, with a strong focus on the poorest communities.

Bu Lamont, who had to close a projected deficit of roughly $2.6 billion over the next two fiscal years combined, suspended an ongoing initiative to ramp up education grants to local districts.

He also may have dealt a death blow to a program that was supposed to share more than $300 million annually in state sales tax receipts with cities and towns, and while he did pledge communities a share of the revenues from the proposed taxation of cannabis sales, that represents a tiny fraction of the sales tax receipts they were promised.

“This past year has been an exceptional challenge to our cities and towns,” Lamont said in his budget address. “There isn’t a single mayor who in 2019 budgeted for a pandemic in 2020, and they are struggling to build this new reality into an already tight budget for 2021 and beyond.”

That said, most of the new money Lamont would distribute to cities and towns wouldn’t come out of the state’s coffers.

More than $400 million in federal relief for local school districts

The largest chunk, by far, involves about $220 million in federal pandemic relief funds that are designated in each of the next two fiscal years for local school districts.

But some legislators are worried, because the money runs out in two years but the problems created by the coronavirus might not go away — ever.

New hygiene and air quality standards, investments in technology and remote learning will become essentials long after the pandemic, they said.

Still, leaders of municipal advocacy groups praised Lamont for not cutting local aid when Connecticut was faced with another state budget deficit.

“Gov. Lamont’s proposed budget provides welcome news for Connecticut’s small towns,” said Betsy Gara, executive director of the Connecticut Council Of Small Towns. “Given the ongoing fiscal challenges facing municipalities and the uncertain economic impact that COVID-19 will have on property tax revenues, COST is relieved that the budget does not include any cuts to municipal aid.”

Joe DeLong, executive director of the Connecticut Conference of Municipalities, thanked Lamont for targeting most funding on those urban centers hardest hit by the pandemic.

Programs put on hold that would have increased relief to towns

Trumpeted loudly by the legislature’s majority Democrats when enacted in 2015, it was projected to share about $300 million in sales tax receipts with communities by 2018 — and keep growing after that.

But communities ended up getting about one-tenth of that in 2018, and a year later, the program was mothballed because of budget deficits — all with the pledge that it would come back in the 2021-22 fiscal year. Many municipal leaders have been openly skeptical it will ever be restored if not done this year.

According to Lamont’s proposal, it won’t.

Progressive Democrats in the legislature argued Connecticut could afford to share these revenues if it replenished state coffers by raising income taxes on the wealthy. But Lamont has countered repeatedly that this would drive rich taxpayers from the state.

“I’ve always said, we don’t need more taxes, we need more taxpayers, and they are already paying dividends, as you can see by our balanced budget,” Lamont said.

But New Haven Mayor Justin Elicker, whose community will face a $66 million deficit next year unless it cuts spending, increases revenue or both, said the state is painting his city into a corner.

“Let’s be clear, the governor’s unwillingness to raise taxes on the wealthy means effectively raising taxes on the working poor in New Haven,” the mayor said.

The governor’s plan would combine $50 million in state borrowing with another $50 million of its cache of pandemic relief from Washington and give municipalities $100 million extra to cover non-education costs next fiscal year.

But advocates noted that’s one-time money, so it really can’t be used to lower taxes or support ongoing programs.

“It is crucial that towns and cities continue to have a seat at the table to advocate for lasting and meaningful property tax reform, reduce unfunded state mandates and encourage regional service sharing,” DeLong said.

The administration projects this initiative would generate almost $40 million by 2023, with $6 million going to distressed communities.