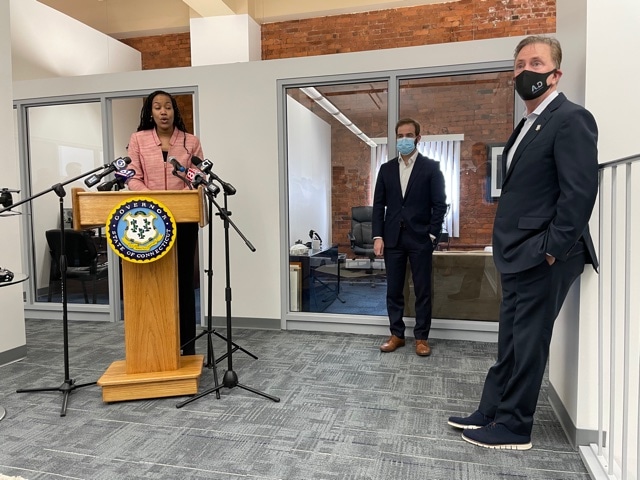 A relaxed Gov. Ned Lamont, right, listens to Gwendolyn Thames of the Department of Economic and Community Development at an event highlighting migration into Connecticut. At center is Hartford Mayor Luke Bronin.

Gov. Ned Lamont stood fast Tuesday on his age-based approach to COVID-19 vaccinations, a change in policy that rejected federal guidelines and disappointed essential workers and medically vulnerable people who thought they were next in line for inoculations.

Lamont said he had no second thoughts on a decision — reached over the weekend and announced Monday — to break with the Centers for Disease Control and Prevention, which recommended using co-morbidities and job descriptions to establish eligibility for the next phase of vaccinations.

Despite compelling stories about the medically vulnerable — one lawmaker spoke Tuesday about a constituent in his 20s with a lung transplant who now goes to the back of the line — the governor said he was contemplating no exceptions.

“Once you start making exceptions, it gets really complicated,” Lamont said.

By reserving the next phase of vaccinations for anyone 55 or older, plus educators and other school employees, the Lamont administration was opting for simplicity — essentially saying the CDC approach was too complex.

In the political world of Hartford, the reaction was more measured than outside the Capitol, where the anger and disappointment were palpable.

“It’s a tough situation, because I understand that the metrics are difficult to measure when we get into the co-morbidities,” said House Minority Leader Vincent J. Candelora, R-North Branford.

Candelora and others said they have heard from constituents who had been led to believe they would be included in the next phase.

“I have been absolutely bombarded in the last 24 hours from really concerned, scared, frustrated folks who have either significant pre-existing conditions or have essential jobs that are not being made eligible for the accelerated vaccine schedule,” said Sen. Matt Lesser, D-Middletown.

One of his constituents was the young man with the lung transplant, a condition that would have made him eligible in the next phase if Lamont had stuck to the CDC guidelines.

“There’s a lot of angst out there and a lot of fear,” Lesser said. “I don’t know how dug-in the governor is to this. But, you know, people seem really upset about it. And I understand why. Unfortunately, people feel betrayed right now. And I don’t think that was intentional.”

I believe that those that have underlying conditions should have been already vaccinated. So the fact that they’re still not a priority is not playing well with the BPRC. ”— Rep. Geraldo Reyes, D-Waterbury, the leader of the legislature’s Black and Puerto Rican Caucus

As recently as Thursday, the governor seemed inclined to follow the CDC guidelines, which would have opened vaccinations to an estimated 1 million people, leaving vaccinators with the task of vetting recipients for eligibility — and giving Lamont a measure of political cover.

“I looked at the CDC list, and I said, ‘All right, let’s follow the CDC. CDC gives you pretty good cover.’ It made some sense,” Lamont said.

But the list of co-morbidities had inconsistencies, in the administration’s view. It included anyone with a body-mass index of more than 30, a standard for obesity. About 30% of white males 18 or older have a BMI exceeding 30.

“Then we started hearing from our folks at the vaccination centers, saying, ‘How am I going to identify that this is an essential worker, not just somebody saying they were an essential worker? Do I have to have a pay stub?’” Lamont said.

House Speaker Matt Ritter, D-Hartford, said the age 55 standard, especially combined with educators, was defensible given that nearly all COVID fatalities were people in their 50s or older, though the vast majority were older.

“I would say that I think 55 and over, because it’s 96% of the deaths, there’s a real power in that stat,” said Ritter, who was briefed about the change before the announcement. “I just wonder — what after 55 and older?”

Ritter said there will be resistance to making 45 the eligibility standards in the following phase. If setting eligibility by occupation is too cumbersome, maybe the supply will be sufficient to use a broader standard.

Whatever are the future eligibility standards, the Lamont administration must come with a detailed plan to address racial and economic inequities, Ritter and others said. The early data are clear: white residents are being vaccinated at higher rates than persons of color.

“Bring the clinics to the community where they live, so that we can get people vaccinated, so we can stop the pandemic from growing,” said Rep. Toni Walker, D-New Haven.

Rep. Geraldo Reyes, D-Waterbury, the leader of the legislature’s Black and Puerto Rican Caucus, said too few minorities were reached in the early phases, which opened the vaccinations to anyone 75 or older and, more recently, 65 and older.

Those age groups included many people with significant health issues.

“I personally do not have a big problem with the 55,” Reyes said. “But I believe that those that have underlying conditions should have been already vaccinated. So the fact that they’re still not a priority is not playing well with the BPRC.”

The BPRC is the Black and Puerto Rican Caucus.

“But I think the change really reflects kind of the logistical difficulties that I think were making themselves apparent when trying to accommodate so many different specific demographic groups,” Rojas said. “At the end of the day, it’s going to make the process, I think, a lot easier for people to understand and manage in terms of knowing when you’re eligible and when you’re not.”

Others were less sanguine.

“I thought the issue was that we are trying to get more people in minority communities vaccinated. I thought that was what one of the problems was that we’ve been talking about,” Walker said.

The new eligibility standard does not address that, she said.

Sen. Marilyn Moore, D-Bridgeport, said constituents 75 and older in her district have struggled to get appointments.

Hartford Mayor Luke Bronin, who attended a press event with the governor in downtown Hartford on Tuesday, sidestepped questions about the new eligibility rules and said access and outreach are central to providing equity in the cities.

“Our job is to make sure that every eligible resident has easy, convenient access to the vaccine. That’s what we’ve been focused on from the first day the vaccine arrived, and that’s what we’re going to stay focused on, regardless of the decisions about which cohort is eligible,” Bronin said.

Lamont pledged that will happen. His administration intends to “over-allocate” vaccines for underserved communities to address racial inequities.

“We are going to be aggressive,” Lamont said. “We’re going to allocate and over-allocate, make sure that Black and brown people get vaccinated at the same rate as white people — allocate extra doses to do that, bring the vaccine to those folks that need it.”