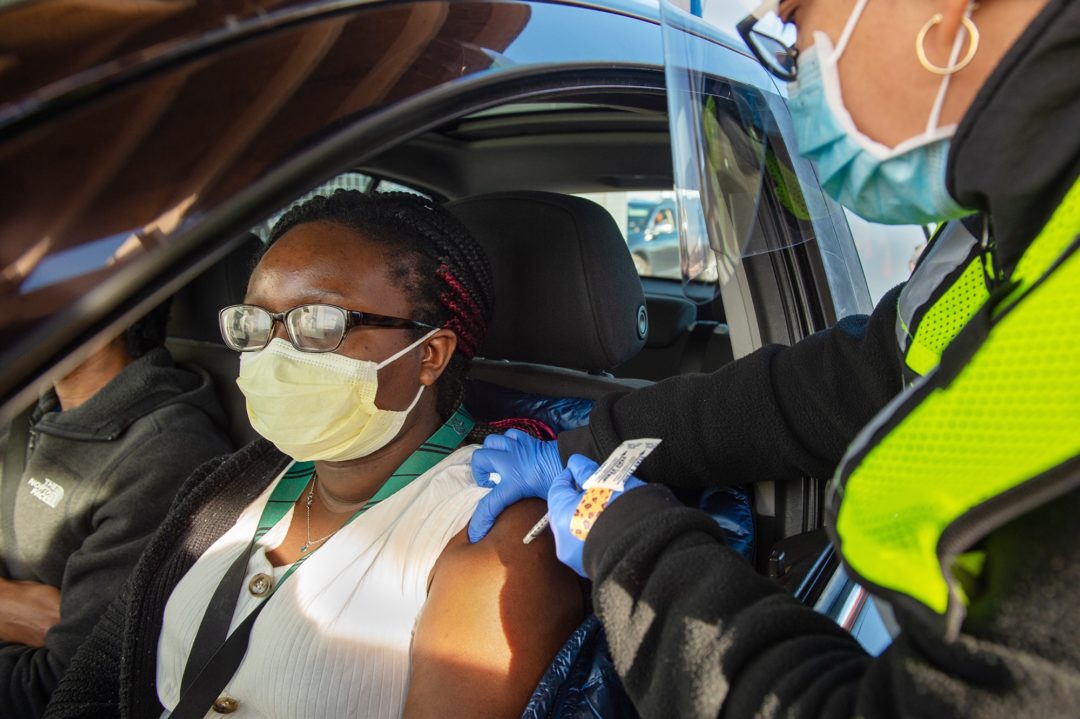 Madeline Fall, 25, of Vernon, receives the first dose of the Pfizer vaccine from Lizmary Reyes, LPN, at Connecticut’s largest drive-through vaccination clinic administered by Community Health Center, Inc. “I’m the first one in my family to get this so I kind of feel like the guinea pig,” said Fall, a health care worker.

Concerns that Black residents are getting vaccinated for COVID-19 at a rate far below that of white residents were borne out Wednesday with the release of state data — and a CT Mirror analysis shows that Hispanic residents are also lagging behind.

Everyone 75 and older in Connecticut has been eligible to get the vaccine for weeks, but only 13% of eligible Black residents have received their first doses, compared to 30% of white older people and about 18% of Hispanics in the same age group, according to a CT Mirror analysis. While the state estimated how many people under 75 have been vaccinated, it is hard to draw any conclusions because data showing how many were actually eligible to receive the vaccine in that age group were not available.

Further complicating things, the Department of Public Health used 2010 Census data to estimate the percentage of residents who have received the vaccine in each age group. Since 2010, the number of 75-and-older Hispanics in Connecticut has nearly doubled, according to U.S. Census data — meaning the rate of Hispanics getting vaccinated is far less than what the state data show.

It was not immediately clear Wednesday night why the state used 2010 data for its analysis.

The state on Wednesday estimated that 34.8% of the Hispanic 75-and-older population has received at least a first dose of the vaccine. Using more current data, that rate falls to 18.3%.

An analysis of National Center for Health Statistics data suggests similarly inflated figures for other racial minorities, including Black recipients.

When releasing the data Wednesday evening, the acting commissioner of the state Department of Health, Dr. Deidre Gifford, said that while there are limitations to the data, it does suggest that disparities exist in the rates of residents being vaccinated.

“As we open up the vaccine program to individuals 65 and over, we are redoubling our efforts to ensure that vaccine is reaching the communities and populations who have been disproportionately impacted by COVID-19,” said Gifford. “We are re-allocating additional vaccine to communities with large minority populations, encouraging our vaccine providers to conduct outreach and implement other measures to ensure that individuals from underserved communities have equitable access to vaccinations.”

[Is the state’s vaccine rollout leaving behind Black and Latino residents?]

Connecticut is far ahead of other states in knowing the race and ethnicity of those being vaccinated against COVID-19, which is key to understanding whether there is racial equity in the state’s vaccine rollout as the pandemic continues to disproportionately kill Black and Hispanic residents.

Nationwide, the federal government is missing the race and ethnicity data for 48% of those who have been vaccinated, compared to 26% in Connecticut.

Dr. Marcella Nunez-Smith, a Yale professor and the chair of the White House’s COVID-19 Health Equity Task Force, said last week that she is troubled by the lack of vaccine distribution data across the country.

“So let me be clear, you know we cannot ensure an equitable vaccination program without data to guide us,” she said. “I am worried about how behind we are. We must address these insufficient data points as an urgent priority.”

She said the U.S. is behind on race and ethnicity data for vaccines for a few reasons, including a lack of federal coordination, an uneven rollout among states and “inconsistent emphasis on equity in the earliest days of vaccination.”

“Those dynamics don’t just hurt our statistics, they hurt our communities at the highest risk that have been the hardest hit,” she said. “We need [data] to drive an equitable response. Achieving equity requires an understanding of the disparities that exist, and we do this through understanding the data.”

A lot of the data about COVID-19 comes into the CDC without a breakout of race or ethnicity people, “but it is more likely that it reflects the inherent inequities in how our data are collected and reported in different places based on resources and how much equity is prioritized.”

With its release Wednesday, Connecticut became the 24th state to outline the race and ethnic breakdown of vaccinations. So far, every state shows glaring gaps in vaccination rates between race and ethnicities.

State officials, however, said Wednesday they do not plan to regularly release this data because of the “unreliable nature” of their ability to collect the data.

DPH officials warned vaccinators of the racial disparity in a memo sent over the weekend, which bluntly stated they have been disproportionately vaccinating “wealthier and whiter” people and not the state’s most vulnerable populations.

To reverse this trend, the state is deploying additional vaccines to historically underserved communities “to ensure there is no shortage of doses.

An additional roughly 10% of the state’s allocation will go to “high SVI towns” for use at clinics targeted for senior housing, congregate settings and other locations with populations that might not have easy access to vaccine.

Two-thirds of the 60 additional pharmacies that will begin receiving doses this week will be located in vulnerable communities and the remaining in rural, underserved towns.

Last week, DPH released vaccine data that showed that only five communities in the state have vaccinated more than 80% of their over 75-and-older population, and all of them were smaller towns.

The data also showed that vaccinations were going much slower in communities deemed to be on the Centers for Disease Control and Prevention’s “socially vulnerable index” — a measure of communities that are most likely to need assistance in a public health emergency, according to state officials — and that many of the bigger cities such as Bridgeport, New Britain and Waterbury were lagging way behind small, suburban, mostly white communities.

Correction: An earlier version of this story misspelled the first name of the interim commissioner of public health. Her name is Deidre Gifford, not Deirdre Gifford.

This story has been updated to clarity that 10% of additional vaccine doses, not 10% of all doses, will go to vulnerable towns and settings.