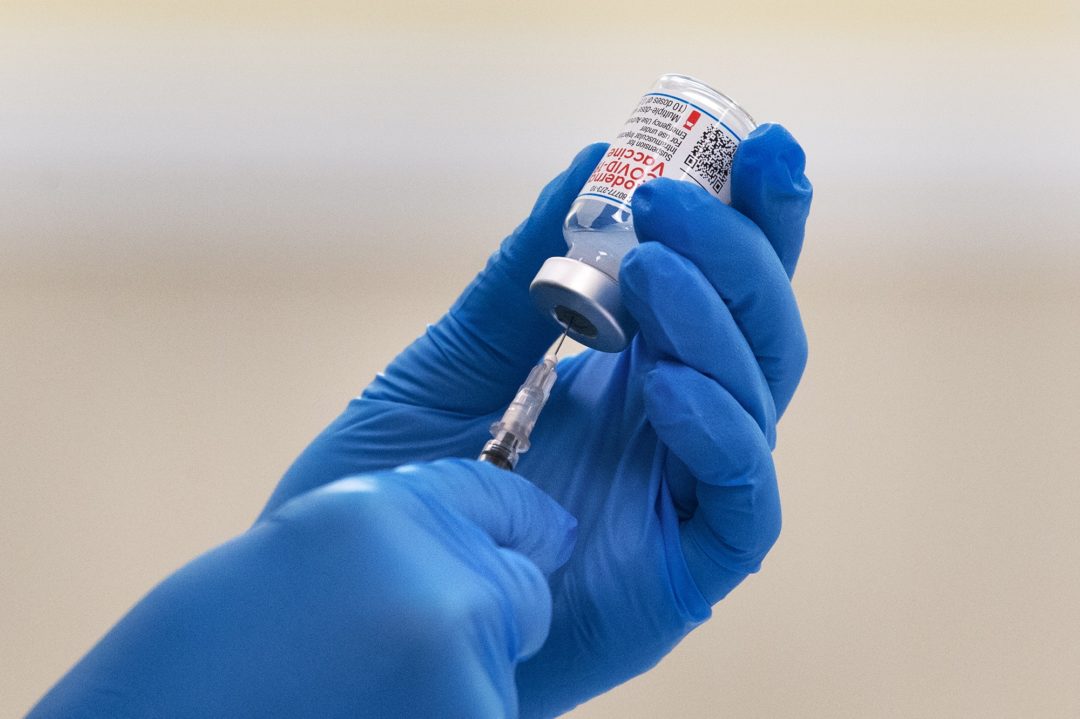 Mikaela Coady, a physician assistant with Priority Urgent Care of Ellington, fills a syringe with a dose of the Moderna COVID-19 vaccine at a clinic at St. Bernard Church in the Rockville section of Vernon Thursday, Jan. 28.

The state has warned vaccinators that too many wealthier, white residents are getting vaccinated for COVID-19 at the expense of “vulnerable” populations and that they should make a more concerted effort to get the vaccine to those groups.

Over the weekend, state Department of Public Health officials sent a memo to their roughly 140 vaccine providers announcing that they could start signing up 65-and-older residents for shots, but it also discussed the racial inequality of who has been vaccinated so far and emphasized that they must do a better job of tracking race and ethnicity data.

“The State of Connecticut has observed the same fact as states across the US: A disproportionate share of COVID-19 vaccine has gone to wealthier and whiter residents of Connecticut (even when adjusting for age),” the memo states. “As we move ahead to 65+ roll-out, we want to reiterate our commitment to equity and ensure we work with all our providers as part of the solution.”

The memo goes on to say the state will continue allocating doses accordingly and that a portion of the vaccines that are available will be going towards closing that gap.

“We will continue to support the work of our local health departments, FQHCs, hospitals, and city partners to conduct outreach for vulnerable populations. This includes mobile clinics at senior housing; protected appointment slots for community members who cannot easily self-schedule at mass vaccination sites; transportation solutions; and more,” the memo states. “We will continue to provide dedicated allocation for these efforts.”

The increased push at the state level to address the inequity of the vaccine rollout was echoed by President Joe Biden’s COVID Task Force, which on Tuesday announced a plan to send vaccine directly to federally qualified health centers in an effort to try and reach minority populations that are not being reached now.

Starting next week, the federal government will release about 500,000 doses directly to those community health centers.

For the first time last week, DPH released vaccine data that showed that only five communities in the state have vaccinated more than 80% of their over 75-and-older population, and all of them were smaller towns.

The data also showed that vaccinations were going much slower in communities deemed to be on the Centers for Disease Control and Prevention’s “socially vulnerable index” — a measure of communities that are most likely to need assistance in a public health emergency, according to state officials — and that many of the bigger cities such as Bridgeport, New Britain and Waterbury were lagging way behind small, suburban, mostly white communities.

Even as Gov. Ned Lamont lauded the towns that had gone over 80%, he said the state would be working closely with some of the communities towards the bottom of the scale.

“We’re going to work with you to help you do better. These are some of the towns that have less than 25%, while the winners are over 80% — New Britain, Winchester, Thomaston, Bridgeport, all at less than 25%,” Lamont said. “So we’re going to help catch up there, make sure this incredibly vulnerable population gets their dose.”

Earlier this week, state officials announced that seven Walmart pharmacies would be getting vaccine through a federal program. They will be in stores in Hartford, New Haven, North Windham, Norwalk, Torrington, Waterbury and West Haven.

“We will continue to site clinic locations in high-SVI towns and areas. The placement of the CVS, Walgreens, and Walmart pharmacy locations this week (nearly entirely supported out of the Federal Pharmacy Partnership Program dose allocation) is nearly entirely dedicated to high-SVI areas,” the memo states.

The new allocation of vaccine specifically for pharmacies to administer is a continuation of the program through which CVS and Walgreens vaccinated nursing home residents and staff across the country.

In Connecticut, the pharmacies are in the midst of the third round of vaccinations in nursing homes and are expected to complete it in the next few weeks. Some of the federal doses that were allocated for that program will continue to go to local branches of CVS and Walgreens.

The state is working with the pharmacies to try and strategically place the newest vaccinators where shots are needed most. They have added at least a dozen CVS and Walgreens pharmacies recently to the vaccinator list, many are in eastern Connecticut, particularly the northeast corner of the state, which has few available vaccine sites.

In addition to discussing vaccine allocations, the DPH memo said the state expects vaccinators to do a better job of tracking whom they are vaccinating.

“Monitor your own data regarding race, ethnicity, and zip codes of the patients you serve,” the memo states.

The state hasn’t released detailed data on the racial or ethnic breakdown of who has been vaccinated.

The DPH is also going to offer training for becoming COVID ambassadors. The memo doesn’t detail what the training will entail.

“We will launch a trusted messenger, train-the-trainer program to support community leaders to be COVID-19 vaccine ambassadors,” the memo said .”We will have a webinar and toolkit available to support these efforts during the month of February.”