Connecticut has administered a first dose of the COVID-19 vaccine to 45% of the state’s residents 75 and older, but several major cities have some of the lowest vaccination rates in the state, according to an analysis by the Connecticut Mirror.

There are seven communities that have yet to vaccinate 25 percent of their elderly population, including three cities: Bridgeport, New Britain and Waterbury. Smaller communities in the northeast and northwest corners of the state, where officials have acknowledged “vaccine coverage issues,” also post lower rates.

The Mirror analyzed vaccine dosage data through 9 a.m. on Feb. 1 on a town-by-town basis. State officials are using the data to identify areas with coverage issues and assess whether they need to open more clinics or do more mobile clinics, particularly in urban communities.

For some, the need is clear.

Bridgeport State Sen. Marilyn Moore said Monday that lack of vaccination sites in her city is similar to the spring, when the city lagged behind in COVID testing until the state started running mobile clinics in church parking lots and community centers.

Moore said the situation is more dire this time.

“This is life and death now, and everybody who is eligible should have access to the vaccine — and that’s not what I am hearing from people here in Bridgeport,” Moore said.

Moore sent a letter to acting Department of Public Health Commissioner Deidre Gifford late last week seeking the state’s assistance in the city. Bridgeport’s Director of Public Health resigned abruptly last month, and the department is now being run by a committee of city officials.

“We have had many conversations during the pandemic about racial equity and access, and here we are again in Bridgeport without qualified persons in charge at a critical time,” Moore said in her letter.

Moore said she is “genuinely concerned about both their (Bridgeport officials) knowledge of public health and their ability to roll out a plan that has substance.”

“My impression of their plan is it was created by well-meaning people who have little knowledge on how to handle a public health emergency or how to implement a sustainable plan and evaluate its effectiveness,” Moore said.

Moore said she is also concerned that, in general, “Black and brown people” aren’t getting the same access to the vaccine across the state.

The vaccination rates show differences in areas that the federal government identifies as “vulnerable.”

The Centers for Disease Control and Prevention ranks census tracts across the nation in vulnerability, taking into account 15 different factors including age, race, income and living situation. The vulnerability index predates the pandemic but nevertheless tracks variables that have strong associations with COVID-19 mortality rates in Connecticut and across the nation.

“This social vulnerability index is a CDC measure of communities that are most likely to need assistance in a public health emergency,” the state’s Chief Operating Officer Josh Geballe said at last Thursday’s press conference.

An analysis by the state published last week found that eligible individuals in towns with at least one high vulnerability census tract were less likely to have been vaccinated than counterparts in towns that did not. 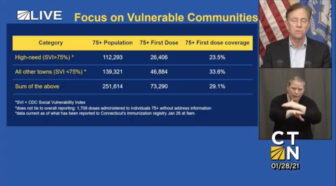 A Mirror analysis on Monday data found that towns without a highly vulnerable census tract reported median vaccination rates that were higher by 15 percentage points (52.77% – 37.5%).

The state is not yet releasing vaccination data by race but plans to once the data are standardized across various reporting systems, Geballe said at last Thursday’s COVID briefing. “I don’t think we need that data to know that we’re going to need to do very focused work to reach out to these communities and make sure that they have ready access to vaccines.”

Toggle between the buttons to overlay vaccination rates. Source: Centers for Disease Control and the Governor’s Office. Credit: Kasturi Pananjady

These percentages are useful to be able to compare one town with another, but all of them likely represent inflated figures. Nevertheless, they provide a qualitative overview of vaccination trends. The data also omit about 15,000 vaccination doses that could not be associated with an address.

In the rural areas of Litchfield County and Windham County, the state is turning to CVS and Walgreens, which are vaccinating nursing homes residents right now. Walgreens now has 11 pharmacies offering vaccines, and almost all of them are in Eastern Connecticut towns such as Killingly, Plainfield and Eastford.

In the Northwest corner, the state has partnered with an addiction recovery center in Kent. The High Watch Recovery Center opened a vaccination clinic last week. It is one of the only facilities other than Sharon Hospital that are available for elderly residents in the entire area.

High Watch Vice President of Communications Jason Perillo said, “It was clear early on that the Northwest corner wasn’t going to be adequately served for vaccines.”

They purchased a new freezer and went through the DPH application process to become a vaccination site. They opened last week in a doctor’s office in the center of Kent and administered 1,200 shots in seven days, Perillo said.

“We recognized right away the biggest obstacle was people were struggling to register online, so we basically started encouraging walk-ins or took appointments by phone,” Perillo said. “We had people walking in literally in tears who were so happy that we threw away the playbook and went to our own system.”

Perillo said people have come from as far away as Danbury and New Milford as well as surrounding towns to get vaccinated. Perillo is also a State Representative (R-113) from Shelton.

Geballe acknowledged the state was trying to get more clinics open in the upper corners of the state and mentioned a new one in Kent.

“Pharmacies are coming online now which have been targeted to … the northeast and northwest corners of the state where we don’t have as good coverage with other providers right now,” Geballe said. “We’re really working very strategically to make sure we’ve got great coverage statewide.”