Black lawmakers call their relationship with Lamont ‘a work in progress’ 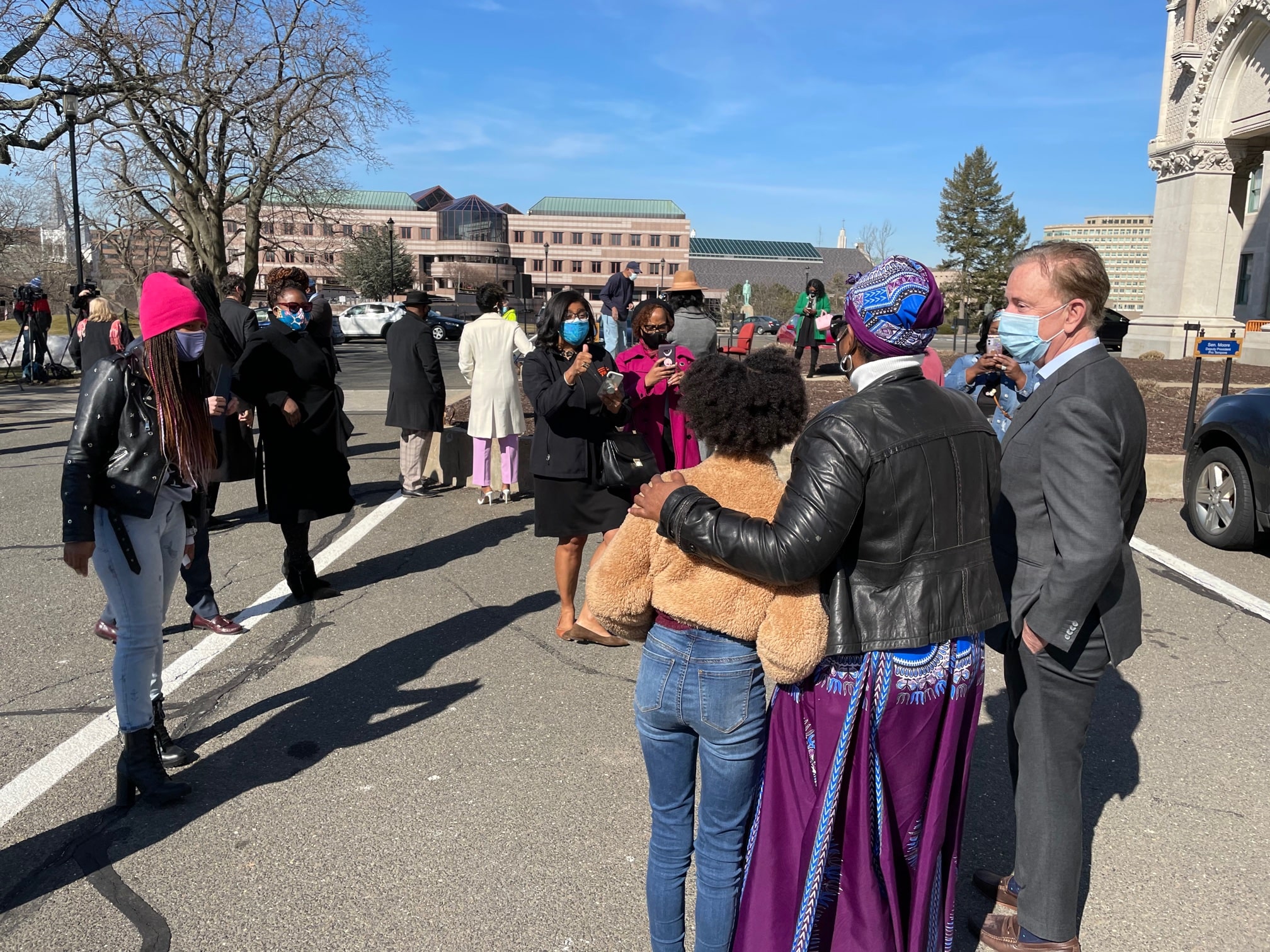 Gov. Ned Lamont poses for a photo with Rep. Robyn Porter and 13-year-old Christina Jackson before the ceremonial signing of the Crown Act. His relationship with Porter has been strained.

Not unkindly, Gov. Ned Lamont was reminded Wednesday at the ceremonial signing of an anti-discrimination bill that the fight for civil rights is an endless movement, not a static destination. The question always is the same: What’s next?

Black lawmakers and community activists took turns at a microphone before Lamont signed the Crown Act, a law that prohibits discrimination based on hairstyles historically associated with race. Its passage came quickly, nearly unanimously.

“Today, it’s hair. Tomorrow is going to be something else,” said Suzette DeBeatham-Brown, a minister who is mayor of Bloomfield, the Hartford suburb. “But you will have to hear us. You will have to deal with us. And we will continue to move this fight forward.”

Before the ceremony outside the south side of the state Capitol, there were no obvious signs of the lingering tension in the governor’s relationship with the legislature’s Black and Puerto Rican Caucus over school funding, marijuana legalization and other things.

Lamont arrived early and mingled, posing for a photo with Rep. Robyn Porter, D-New Haven, and 13-year-old Christina Jackson of Windsor, one of the scheduled speakers. Porter often is a critic, clashing with Lamont on specifics, even when they agree on principle.

“Robyn, you inspire me, but I think about Christina every day,” Lamont said during the ceremony. “A little bit of spring in the air, and that is a time of hope. It’s a time to change. And every day you fight for more perfect union.”

Lamont began his remarks by saying, “Look, I’m a white guy.” He said he was raised on the myth of the American melting pot, not the reality of a population that is diverse and proud of its differences. He said the Crown Act is about more than hair. 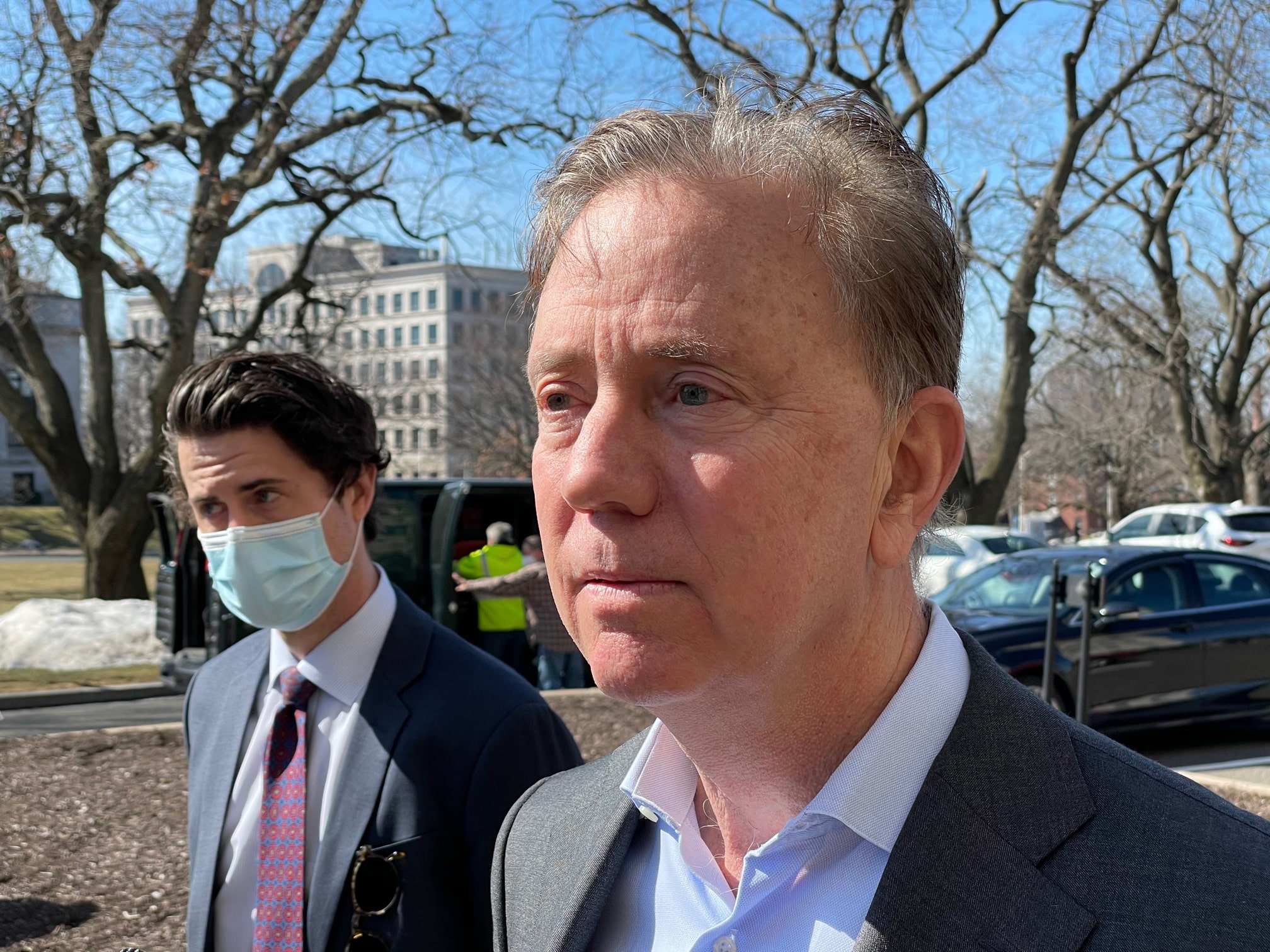 Gov. Ned Lamont told reporters he intended to be ambitious with the coming federal pandemic relief.

Lamont told reporters after the ceremony that he was already thinking about what’s next, about how to use the billions in federal pandemic relief coming to Connecticut in the American Rescue Plan Act.

“We’re getting billions of dollars from the federal government under the Rescue Act, and I don’t want it to be lots of little special projects spread evenly everywhere,” Lamont said. “I want it to be transformative for the state. And it starts with justice and equity.”

The $1.9 trillion relief bill won final passage in the House on Wednesday, and President Joe Biden plans to sign it Friday.

Lamont, 67, a Greenwich businessman and Democrat, tacks toward the center on budgeting, a source of chronic friction with progressives. His administration and lawmakers already are struggling over how to spend the federal windfall.

He has been an ally on issues important to the Black and Puerto Rican Caucus, defending and signing measures opposed by business interests, notably the $15 minimum wage and a paid family and medical leave program. To the dismay of the State Police union, he signed a police accountability bill passed in a special session last summer after the death of George Floyd.

This year, he is pushing for the legalization of marijuana and the expungement of criminal records for arrests on simple possession charges. But he and some caucus members, especially Porter, have clashed on other aspects, including the extent to which communities and individuals hurt by the war on drugs should benefit from cannabis commerce.

Lamont’s chief of staff, Paul Mounds, and his budget chief, Melissa McCaw, are Black, a first in Connecticut. They have been Lamont’s primary defenders on issues of equity, first in the budget and more recently in the marijuana bill.

The criticism of his budget proposal came swiftly. Urban and liberal lawmakers complained that it shortchanged human services. One lawmaker called it appalling. Another said it “does not look like equity.”

On Wednesday, Porter and two other members of the Black and Puerto Rican Caucus described the relationship with the governor the same way — “a work in progress.”

Rep. Anthony Nolan, D-New London, said Lamont’s support for the Crown Act and marking its passage with a ceremony were small steps, though appreciated.

“It’s always small steps,” Nolan said. “For him, it’s small steps. We need much larger steps to make sure that action speaks louder than words.” 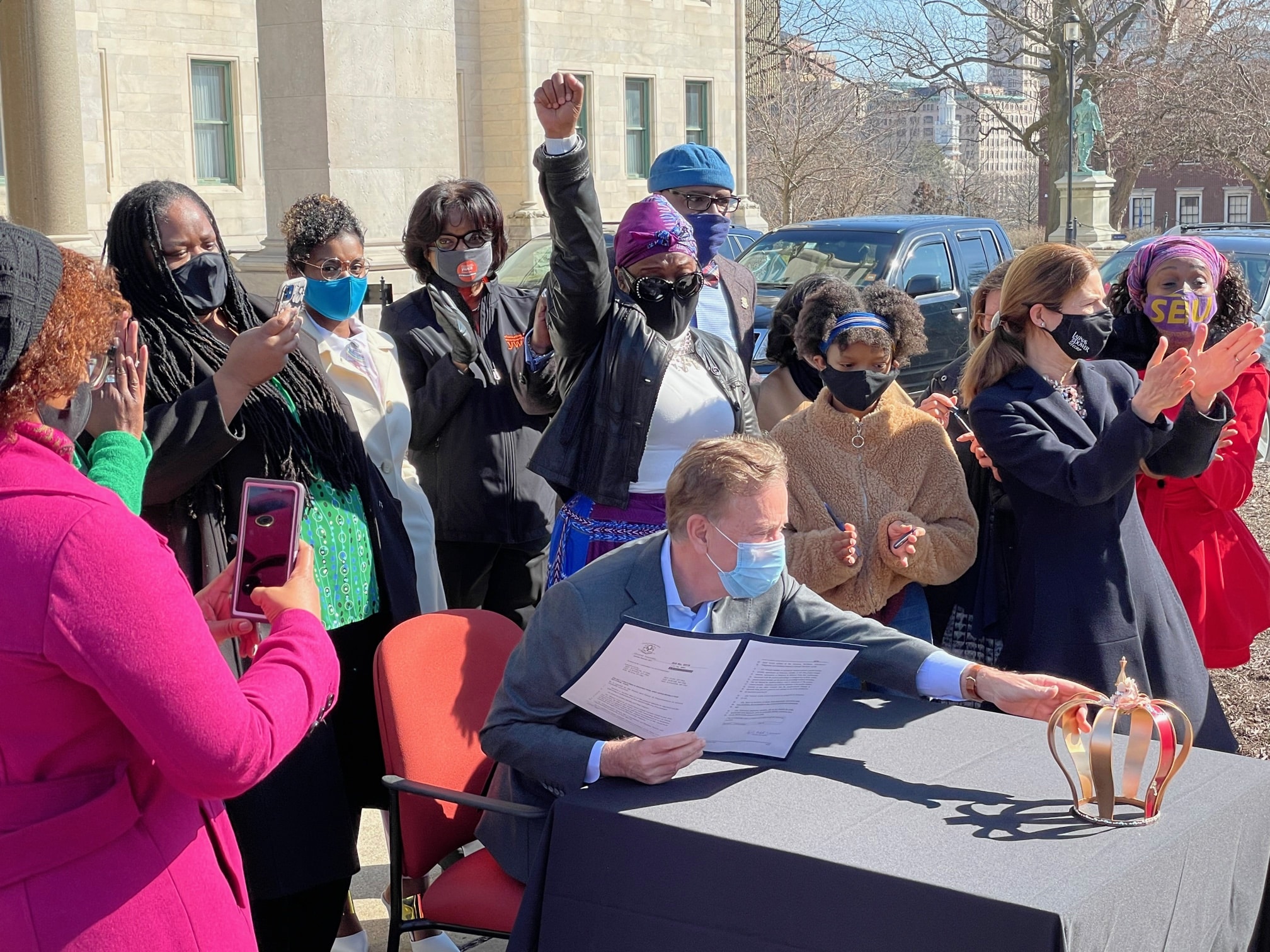 Rep. Robyn Porter raises a fist after the governor signs a ceremonial copy of the Crown Act, a bill she sponsored.

Reyes and Nolan are among the caucus members pushing the administration to agree to put more money into Education Cost Sharing, a formula distributing state aid to local education. Lamont proposed canceling a scheduled increase in ECS funding, something Reyes called a body-blow to Waterbury and its public schools.

“This was a small step, compared to the change that we need to make with ECS funding. That’s a giant step,” Nolan said.

Reyes and Lamont stood to the side after the ceremony, deep in conversation. Before they left, Reyes and Nolan were invited inside the Capitol to meet with Mounds. They talked for an hour. Mounds said the paucity of face-to-face meetings during the pandemic has been a hindrance in maintaining a working relationship.

“Gerry [Reyes] has agreed for us to do a distanced, in-person meeting with the caucus very soon,” Mounds said. “That came out of today’s meeting.”

Mounds said the Black and Puerto Rican Caucus, with 32 members, is an influential voting bloc when it unifies behind an issue. One of its members is the new House majority leader, Jason Rojas of East Hartford.

“When they are coordinated and work together, they are the most powerful caucus in the building,” Mounds said. “They have chairs of major committees and for the first time are part of legislative leadership. Their voices are heard at every table, and they’ve got to be listened to.”