At an urban church, a prayer for greater COVID-19 vaccine access and outreach 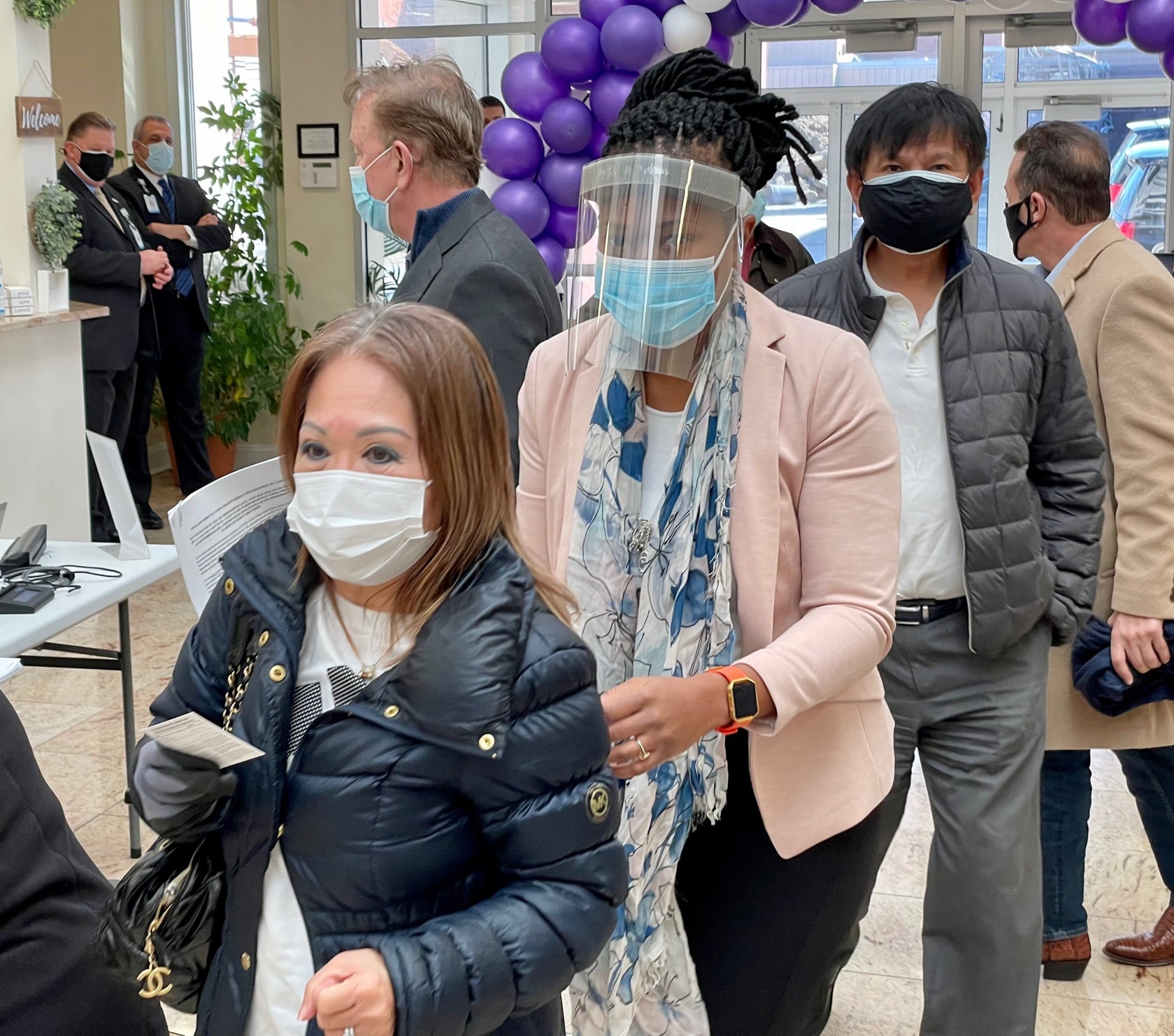 A Yale New Haven staffer escorts a client to a vaccination, while Gov. Ned Lamont, behind her, talks to an intake person.

The campaign to vaccinate the poorest corners of Connecticut came Monday to the Cathedral of the Holy Spirit in Bridgeport, a Black church in an East Side neighborhood where the annual per-capita income is less than $19,800 and a quarter of the residents live in poverty.

About 75 people would be inoculated with the first dose of the Pfizer vaccine at the pop-up clinic operated by Yale New Haven Health System, and City Councilwoman Aidee Nieves said she would be eager to see how many recipients came from the neighborhood she represents.

The city vaccinated 1,900 people last week, many of them teachers.

“The numbers are not moving here. The needle needs to move a little harder,” said Nieves, the president of the council.

Yale New Haven has vaccinated 100,000 people, including 50,000 who have received both doses of the two-shot Moderna and Pfizer vaccines at its facilities statewide, including Bridgeport Hospital. Yale New Haven, which operates eight mass vaccinations sites, is now experimenting with smaller pop-up clinics.

“This is a new part of what we’re trying to do to get vaccinations out there and more accepted,” said Marna P. Borgstrom, the chief executive officer of the Yale health system.

With eligibility restrictions and vaccine supply receding as obstacles, access and outreach are expected to quickly become the keys to closing the gap in vaccination rates between neighborhoods of the white and well-to-do and struggling communities of color. Nieves said success will require retail politics.

“It’s going to take a full grassroots campaign to get all the African Americans and Latinos vaccinated,” Nieves said. “Unlike before, when we were in the beginning stages of COVID [and] door knocking wasn’t a thing.”

Gov. Ned Lamont arrived for the clinic with Mayor Joseph P. Ganim, his opponent in the 2018 Democratic primary for governor, and Mario Testa, the city’s Democratic chair and among the last of the state’s old-school political bosses. They met for coffee before the clinic, and the governor and mayor bantered.

“We want to make sure that people come out and get the vaccination. We want everyone to get the vaccination. I got mine a week ago,” Ganim said. “Mario Testa, our Democratic town chairman just got his second one. The governor’s had his, because he’s two or three or four or five or six or seven years older than me. I don’t know many.”

Lamont, who is 67, was eligible in the second phase of the vaccine rollout. The 61-year-old mayor became eligible in the third phase, as of March 1. But the governor arrived knowing that in a few hours his administration would announce an acceleration of the age-based eligibility schedule that made the vaccines available first to those at least 75, then 65 and, more recently, 55.

An increase in supply will drop the eligibility age to 45 on Friday, and then open to anyone 16 or older on April 3, a month ahead of the original schedule.

“But pretty soon, as you’ve heard from the people here, it’s going to be less a question of the supply of vaccine and more a question of getting people to stand up and realize it’s the right thing to do for their family,” Lamont said.

Vaccine hesitancy is an issue, though not one unique to communities of color. A new CBS News Poll shows that attitudes towards the new vaccines are improving in Black communities, while the poll reinforced what others have found: a widening political divide. According to a recent poll by Pew Research, Democrats are far more likely than Republicans, 83% to 56%, to get a vaccine for COVID-19.

“I was just joking to Joe that the next group they’re worried about is young white male Republicans,” Lamont said. Turning to Kenneth H. Moales Jr., the pastor of Holy Spirit, the governor said, “That’s your next miracle.”

“It’s a complex issue. It does exist in the Black and brown community, and it also exists in the young Republican male community. The other thing that I think is really important that we need to talk about is just access. In ZIP codes in Black America, the polling sort of shows that there’s a shift towards people wanting to get the vaccine, but it’s just not as easy” to get it, Deshpande said. “It’s access and eligibility. So we’re really focused on, number one, doing all the outreach and education we can, but also making it as easy to get the vaccine in a number of different places.” 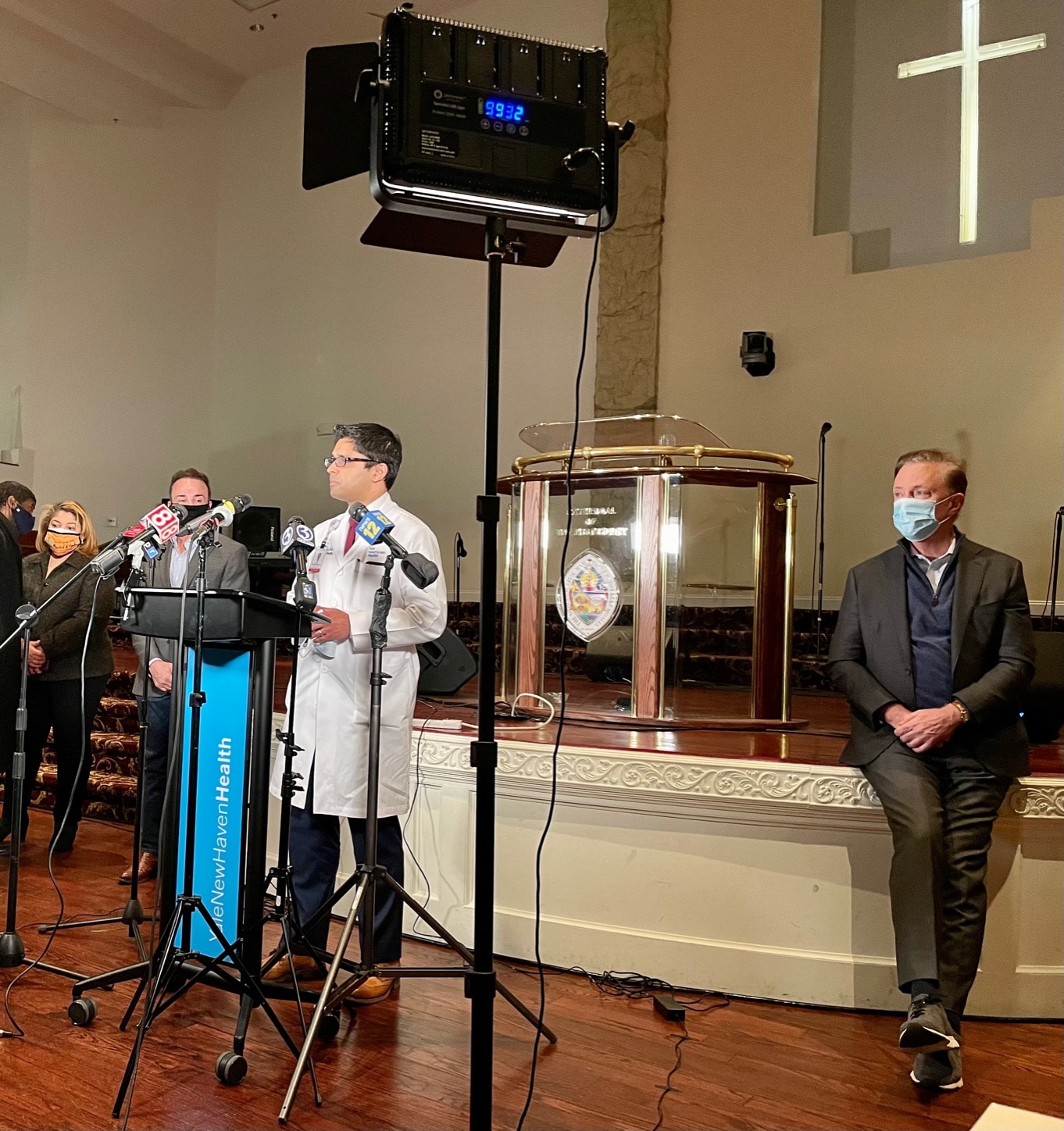 Dr. Ohm Deshpande takes a question about the vaccination clinic at Cathedral of the Holy Spirit. At right, Gov. Ned Lamont.

Moales, the pastor, said 270 vaccinations had previously been administered at the church after Sunday services. For too many others, the church was a place to say final goodbyes in the past year.

The church never closed completely during the pandemic, and it hosted more than 300 funerals. Less than 70% were church members, and almost 15% were not of the Christian faith, Moales said.

The minister said he was heartened to see a place so heavy with death became “a venue for life.”

His church already was in deep financial distress before the pandemic, having borrowed heavily to finance an expansion. Two weeks before the first COVID-19 case was identified in Connecticut, a federal judge ruled for a lender in a foreclosure case against the church. Moales said he is trying to negotiate to keep the church open.

“Giving is down. Attendance is down,” he said. “But the demand [for services] is higher.”