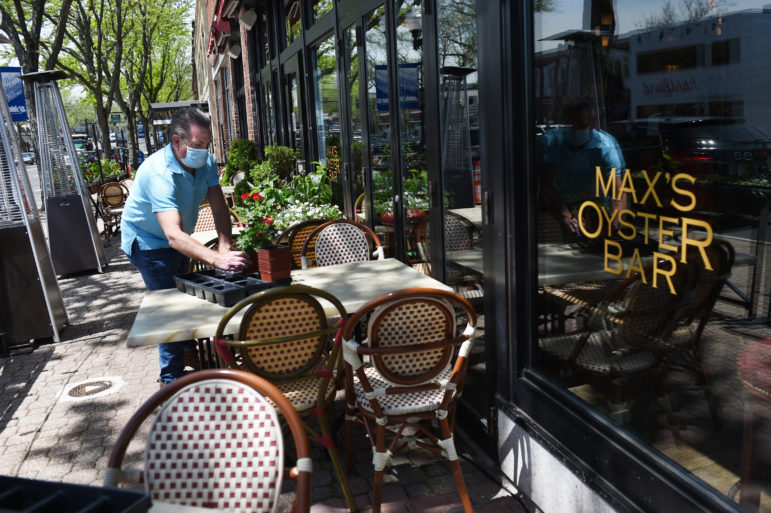 Bob Cooke, partner and co-owner of the Max Restaurant Group, works on filling planters for the patio at Max’s Oyster Bar in West Hartford Center in 2020.

With Connecticut poised to lift many capacity limits Friday on restaurants, many other businesses and social gatherings, Gov. Ned Lamont urged residents Thursday to remain vigilant nonetheless against the coronavirus.

And a leading epidemiologist warned that Connecticut is performing well in its “race against time” to vaccinate residents before COVID-19 variants take deep hold — but could lose ground if residents abandon mask-wearing and maintaining social distance.

“This is the right decision at the right time,” Lamont said of a whole host of capacity changes that will take effect Friday. But he quickly added that “if something changes dramatically … we have the ability to change course.”

Capacity limits are lifted entirely for restaurants, most indoor recreation areas, stores, offices, libraries, museums, gyms and houses of worship, though all are subject to an 11 p.m. curfew.

Bars that do not serve food remain closed. Those that do must maintain social distancing, including an eight-person-per-table limit.

All sports teams are allowed to practice and compete, provided they follow Department of Public Health guidelines. And the policy mandating that travelers from COVID-19 states with high infection rates quarantine for 14 days is lifted and now is only advisory.

The changes come after about three weeks of daily and weekly infection test rates averaging a little less than 3% positive. Positivity rates had reached into double digits earlier this winter. The governor reported Thursday that 2.76% of those tests completed Wednesday for COVID-19 in Connecticut were positive.

Lamont also reported Thursday that another 15 people died from the coronavirus since Wednesday’s report and that it has claimed 7,822 lives since the pandemic began one year ago.

Dr. Albert Ko, professor of Epidemiology and Medicine at the Yale School of Public Health and a frequent advisor to Lamont throughout the pandemic, noted Connecticut also has significant hospital capacity should problems arise.

The administration reported that statewide hospitalizations due to the coronavirus on Wednesday were at 384, down 18 from Tuesday. Hospitals faced five times that caseload when the pandemic was at its worst last April.

What’s most important, Ko said, is that Connecticut continues to distribute coronavirus vaccines efficiently, that residents receive them and that everyone continues to wear masks and maintain social distance.

And while Ko didn’t criticize Lamont’s lifting of capacity limits, he did urge residents to avoid large-scale gatherings if at all possible, calling them “super-spreaders” of the virus.

“I wouldn’t call it a gamble,” Ko said of the capacity changes, though he acknowledged “there is a risk.”

But Ko added, “I think we’re on a good course,” in part due to how aggressively Connecticut has distributed vaccines to date.

The administration reported Thursday that 966,705 residents have received at least one vaccination dose and 536,736 are fully vaccinated.

Ko also cautioned against the mutating strains of the coronavirus, including variants that originated in Brazil, South Africa and the United Kingdom — all of which have been identified in Connecticut.

Existing vaccines have proven effective against these in terms of preventing cases severe enough to cause death or hospitalization. But Ko said researchers still are assessing the degree to which vaccinated patients still could contract these variants asymptomatically and transmit them to others.

“I think we’re learning something each day,” he said, adding that this is one reason why mask-wearing and social distancing remain crucial.

Lamont: The bigger vaccine risk is not to take it

The Johnson & Johnson vaccine pause means Connecticut will see its weekly allotment shrink from 288,000 to 179,000 doses.