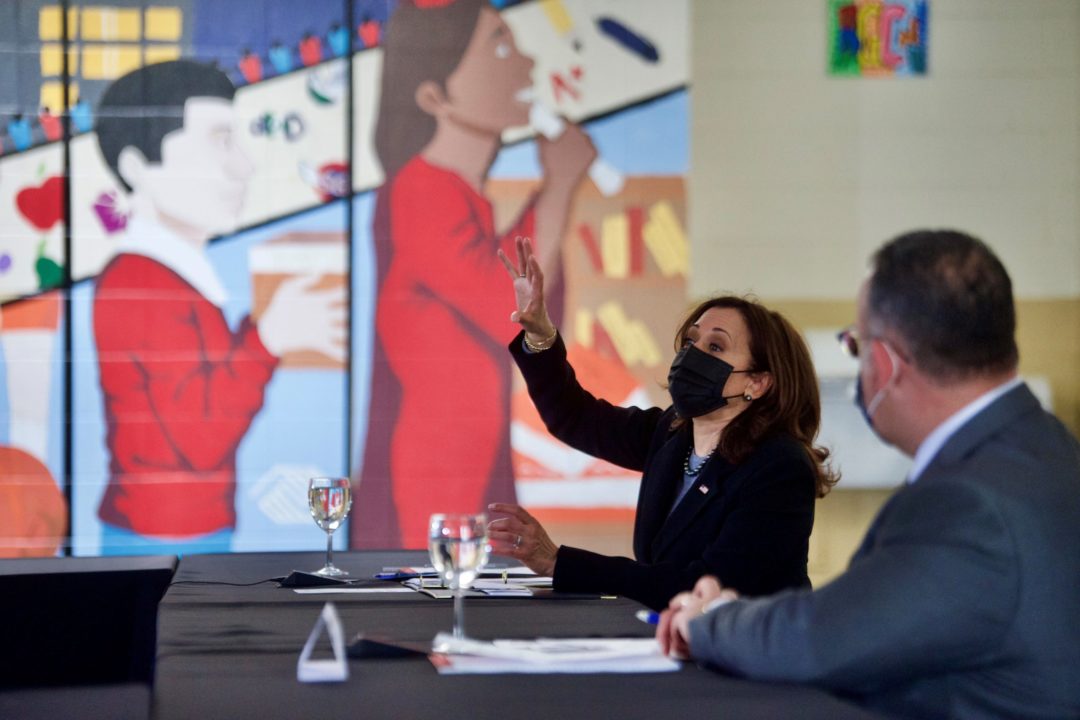 WEST HAVEN — Vice President Kamala Harris said Friday that elements of the $1.9 trillion American Rescue Plan will lift half of American’s poorest children out of poverty, a nod to the child tax credit expansion added to the plan after intense 11th-hour lobbying by its champion, U.S. Rep. Rosa L. DeLauro, D-3rd District.

The White House chose two stops in DeLauro’s 3rd Congressional District for Harris to promote the impact of the relief package on children and the schools and day care centers where they are protected and educated.

“You tirelessly challenge our country and its leaders to see our children and to understand that when we lift them up, we lift up the entire country,” Harris told DeLauro at the West Haven Child Development Center before an audience of three dozen politicians. “Can we please just applaud Rosa?”

Harris was introduced in West Haven by U.S. Secretary of Education Miguel Cardona, late of Meriden and the state Department of Education.

Harris did not mention the tax credit by name, but the impact on childhood poverty she cited is what researchers have projected will be attributable to an increase in the value of the credit and its reach.

The child tax credit is not new. Originally passed in 1997, it provided $500 annually for each child, but it was largely non-refundable, meaning it could only offset taxes owed or paid to the federal government. That made the credit a middle-class benefit. It eventually was raised to $2,000, with $1,400 refundable and available to poorer households.

The language DeLauro prevailed on the White House to add to the American Rescue Plan both increases the value of the credits and makes them totally refundable. The new credits are $3,600 for children under six and $3,000 for children between six and 17.

If it lifts so many children out of poverty, the tax credit would be a tremendous success. But if Democrats allow it to go off the books in a year, will that be an equally tremendous failure?

That was a question posed to DeLauro at a press conference with Sens. Richard Blumenthal and Chris Murphy before she left to greet Harris at Tweed New Haven Airport. Harris then held events at the Boys & Girls Club of New Haven, lunched at Wooster Square and ended up in West Haven.

DeLauro turned and leaned toward the questioner and squinted in the fashion of Clint Eastwood, at least to the extent possible for a 78-year-old woman whose eyes were framed by a shock of purple hair and a mask splashed with bright colors.

“It’s not going to be a one-year thing,” DeLauro said. 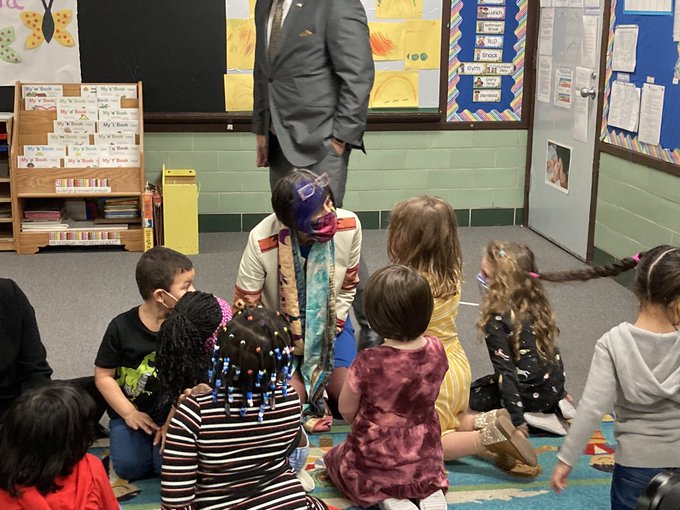 DeLauro got down on her knees to talk to the children at the West Haven Child Development Center.

Promises have been made. Joe Biden ran on the issue then doubled down in a call to a Democratic policy retreat. House Speaker Nancy Pelosi is on board. So is Richard  Neal, the Springfield Congressman who chairs the tax-writing Ways and Means Committee.

“I think this was Richie Neal who said to me, ‘Rosa, it’s harder to take something out of the tax code than it is to put it back into the tax code,’” DeLauro said.

Every Democrat is happy to take a bow for passage of the American Rescue Act, but Murphy and Blumenthal gave a nod to DeLauro, who is in her 30th year in Congress and her 18th year nudging, lobbying and, more recently, hectoring fellow Democrats to expand the child tax credit.

“It’s really exciting that the vice president has chosen New Haven as one of her first stops since taking office,” Murphy said. “And I don’t think there’s any secret as to why we’re getting a little bit extra attention. It’s pretty good to have the Appropriations chairwoman be from New Haven.”

DeLauro took over the committee in January. That gave two neighboring New England members of Congress the Appropriations and Ways and Means gavels at the same time.

“I’m really grateful to chairwoman DeLauro for really sticking with the fight to expand the child tax credit, even when there were dark days, when folks didn’t think it would happen,” Murphy said. “We’re gonna obviously fight to make that provision permanent, because people are going to see what a difference it makes in the lives of kids and families over the course of the next year.”

But as the Biden White House was preparing to put the American Rescue Plan to bed, it did not contain the tax credit. It had already been shut out of the Heroes Act, but that was when Donald Trump was president and Mitch McConnell was Senate majority leader.

DeLauro called Ron Klain, the president’s chief of staff, and every senior advisor whose number was in her possession. The list included economic and domestic policy advisers such as Steve Ricchetti, Brian Deese, Susan Rice and Jared Bernstein.

Bernstein is a member of the Council of Economic Advisers and a former senior fellow at the progressive research group, the Center on Budget and Policy Priorities. He later told a reporter with The 19th that DeLauro called with some “somewhat juicy” and “very emphatic” language.

“I said, ‘Well, what the —, let’s go. Let’s get it done. It’s now our turn. It’s our watch. We got the Senate and we’ve got the presidency,” she said. “No longer can we just lay it at the feet of anyone else but willing partners.”

The impact of the tax-credit expansion went largely unnoticed in the immediate aftermath of Congress handing President Joe Biden his first major victory, a stimulus and relief package that touches all aspects of the American economy with a gusher of money.

“Times change,” DeLauro said. “It’s been an 18-year battle to do this. Environment changes, the players change. You know, only several years ago, nobody was talking about a child tax credit. They thought that this was on the fringe, et cetera. Now it is the center of public discourse.”

Blumenthal said the tax credit will have momentum for an extension.

“This idea may not be bipartisan in the Congress, but it’s very bipartisan among the American people. And I think it is because we’ve been through such a year of heartbreak and hardship, I think it has shone a light on how deeply painful this year has been for everybody, but particularly for those children in poverty.”

Harris said she spoke with Biden in the Oval Office earlier Friday about her trip to DeLauro’s district.