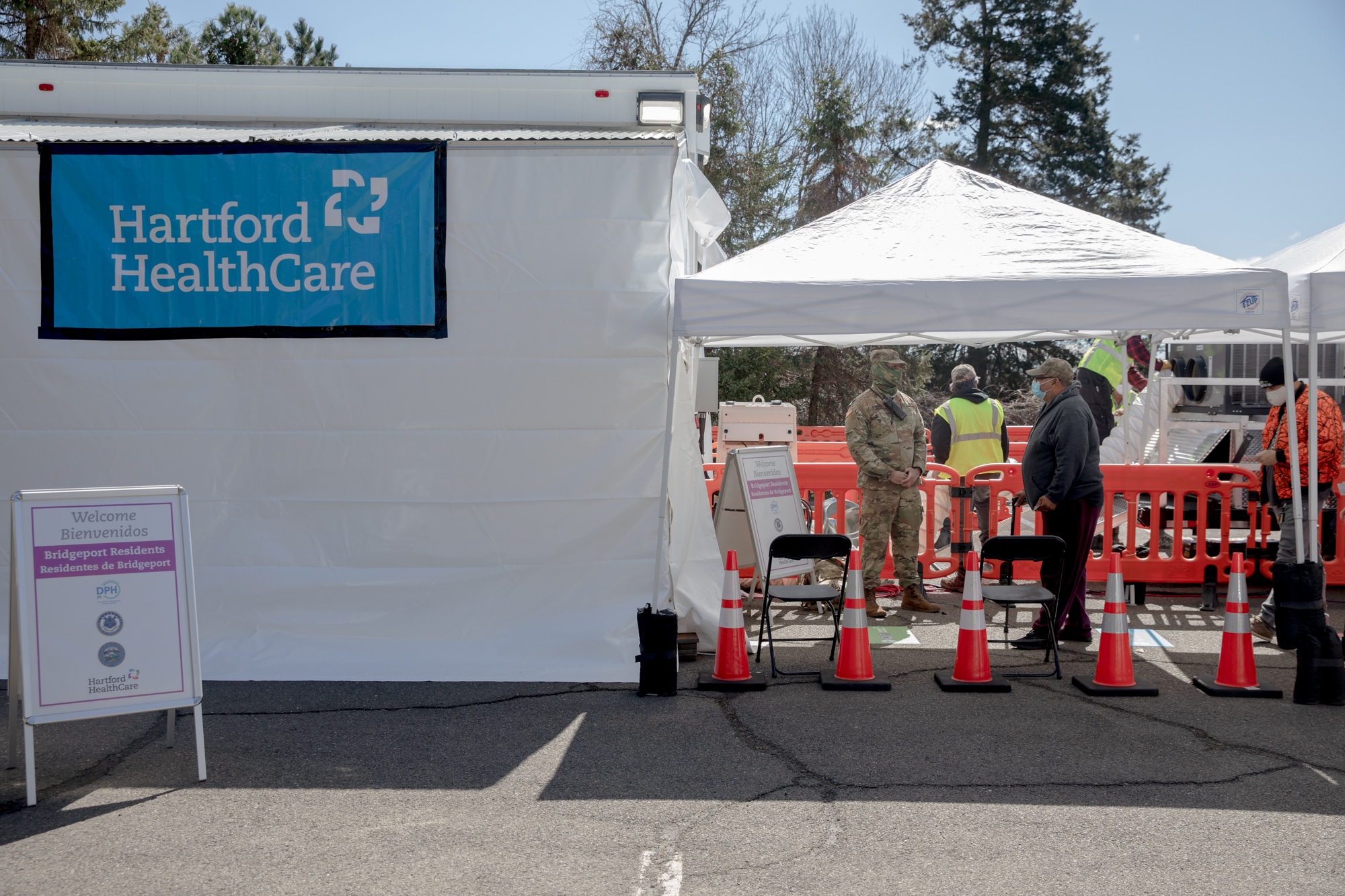 People wait for their turn to enter the vaccination tent at Beardsley Zoo in Bridgeport. About 200 people reserved for vaccination on Monday.

Janet Herron arrived so early Monday to stand in line in the parking lot of the Beardsley Zoo to get vaccinated that she could hear some of the animals in the background.

Herron had received an e-mail from Hartford HealthCare over the weekend letting her know that a mobile vaccination trailer from the Federal Emergency Management Agency would be at the Zoo and walk-ins would be accepted for people who could show they had a Bridgeport address.

“I would’ve stood in the rain if I had to once I heard this was going be here and I could get my J&J,” Herron said, referring to the Johnson & Johnson vaccine that was administered Monday.

Herron and her brother Verley Gordon arrived at least three hours before the clinic was supposed to open. They got a greeting from Gov. Ned Lamont and Mayor Joseph Ganim as they stood in line and learned they were going to be the first people in the country to get vaccinated inside one of the new FEMA mobile vaccination centers.

Lamont and a mix of state, federal and local politicians attended the unveiling of the FEMA trailer, which was set up in the parking lot of the Zoo on Sunday. The trailer will be in Bridgeport for 10 days, moving to several other locations in the city, and Hartford HealthCare officials hope to administer as many as 400 a shots of Johnson & Johnson a day.

The trailer will be in the state for 60 days and will visit 17 communities, from Stamford to New London to North Canaan. 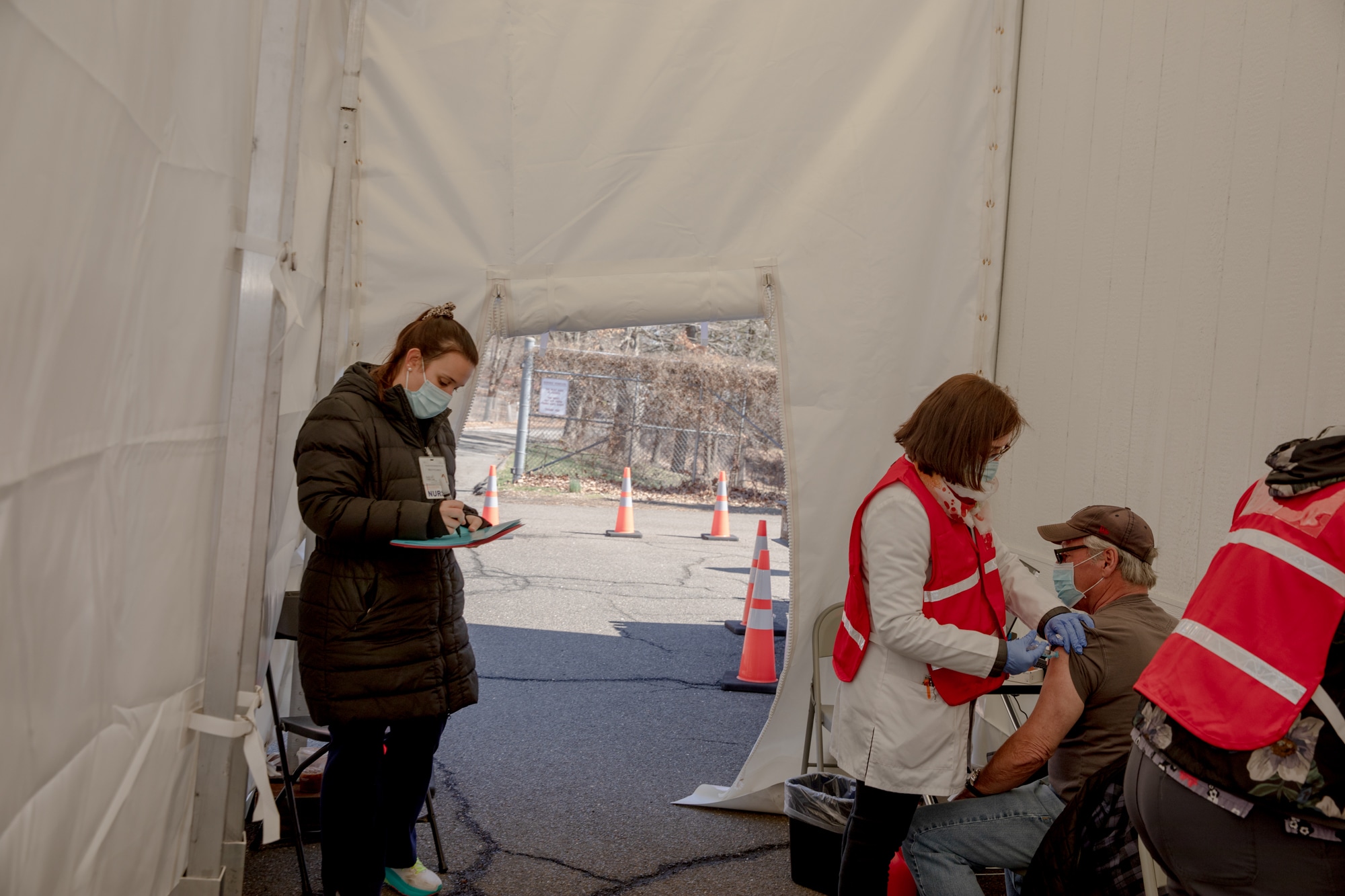 Richard McCarthy, on the right, gets vaccinated at Beardsley Zoo in Bridgeport. Johnson & Johnson vaccination was administered on Monday.

FEMA’s acting regional director Paul Ford said the vaccine center is little out of his agency’s normal zone of disaster relief but that the agency has adapted to become a large-scale vaccinator. This is the first of what will be 30 mobile centers across the country.

“FEMA has never been involved in a health care thing like this. But to think about a year ago, more than a year ago now, we had the president declaring 56 disasters all at one time across our great nation,” Ford said.

State Department of Public Health officials have been working for several weeks to identify sites in cities where the percentage of vaccinated residents lags behind. FEMA’s website says the trailer can accommodate up to six vaccination stations. About 49 people are needed to operate the site, from traffic control to registering people and giving the shots.

The biggest requirement is space — the trailer requires 3,500 square feet of hard surface space, such as a parking lot, in each location. Cities and towns that host the FEMA centers also will be responsible for providing police for traffic control.

State officials are recommending parking the trailer at a school, church or a retail lot with easy access for walk-ups and people using the bus lines. The Beardsley Zoo is located in a 100-acre park right off of Route 8 and has a city bus line that runs to the site.

Bridgeport has consistently lagged behind in the percentage of its residents that have been vaccinated. In data released last Thursday, state officials said that about 17% of the city’s 14,400 residents had been vaccinated, but the numbers are even lower for Blacks and Hispanics.

State officials have acknowledged the discrepancy between vaccination rates for white, suburban residents and Blacks and Hispanics in the cities and have taken several steps to address the problem, including asking vaccinators to use 25% of their vaccine in targeted areas.

The state has a list of 50 ZIP codes in socially vulnerable communities where it is concentrating its efforts. Five of those ZIP codes are in Bridgeport, including where the Beardsley Zoo is located.

Several people talked about the importance of bringing the vaccine to those communities and not waiting for them to find it. 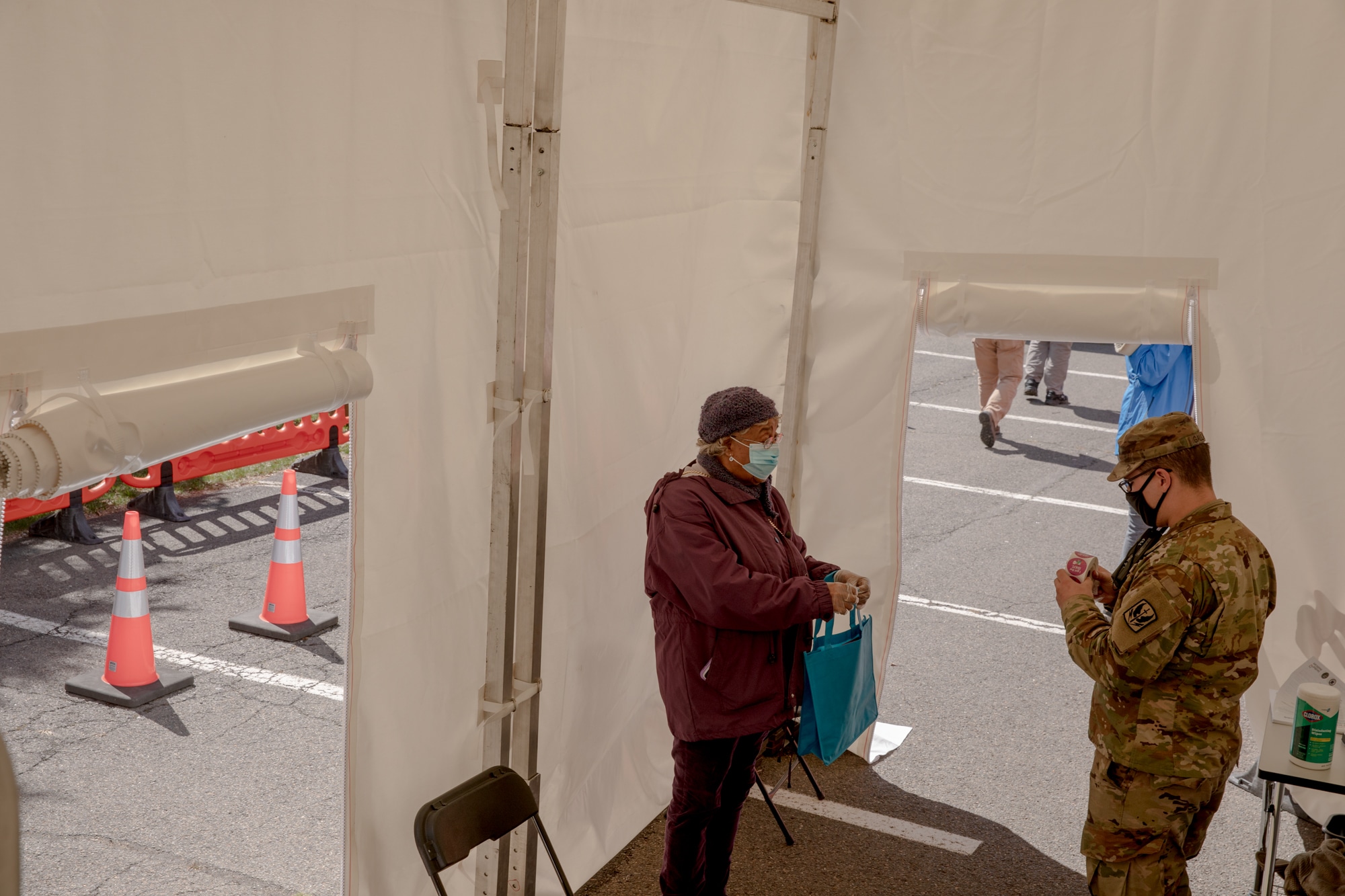 Ruthell W. Elleba waits in the observation area after getting vaccinated at the FEMA trailer site at Beardsley Zoo in Bridgeport on March 29. People could wait in their car too.

The FEMA mobile vaccine trailer is the latest effort by the federal government to boost the vaccine rollout. The government is already providing extra vaccine to pharmacies and federally qualified health centers so the state can allocate its resources elsewhere.

U.S. Rep. Johanna Hayes came to see the trailer even though Bridgeport is not in her district. It will be in Waterbury for four days in mid-April.

“I’m here to see it off and to welcome this van to the state of Connecticut to go into some of these communities where there are language barriers, where there is disproportionate access to health care and in some of the remote areas in my district where these rural farming communities have miles before they get to the nearest health care facility,” Hayes said.

When it was his turn to speak, Lamont turned toward the line of people waiting to get their shots, like Herron and Gordon, with whom he had spoken earlier.

“This is what it means when we say we’re going to bring the vaccine to you and make it easier and possible for each and every one of you to get vaccinated,” Lamont said. “And I really urge you to take full advantage of that. This van is starting off of Bridgeport. We’re going to make sure that nobody is left behind everybody who wants a shot gets that opportunity.

“The vaccine van is coming to you. We’re going to make it easy, no questions asked. That’s how we’re going to get out of this together. It’s going to be a great spring.”