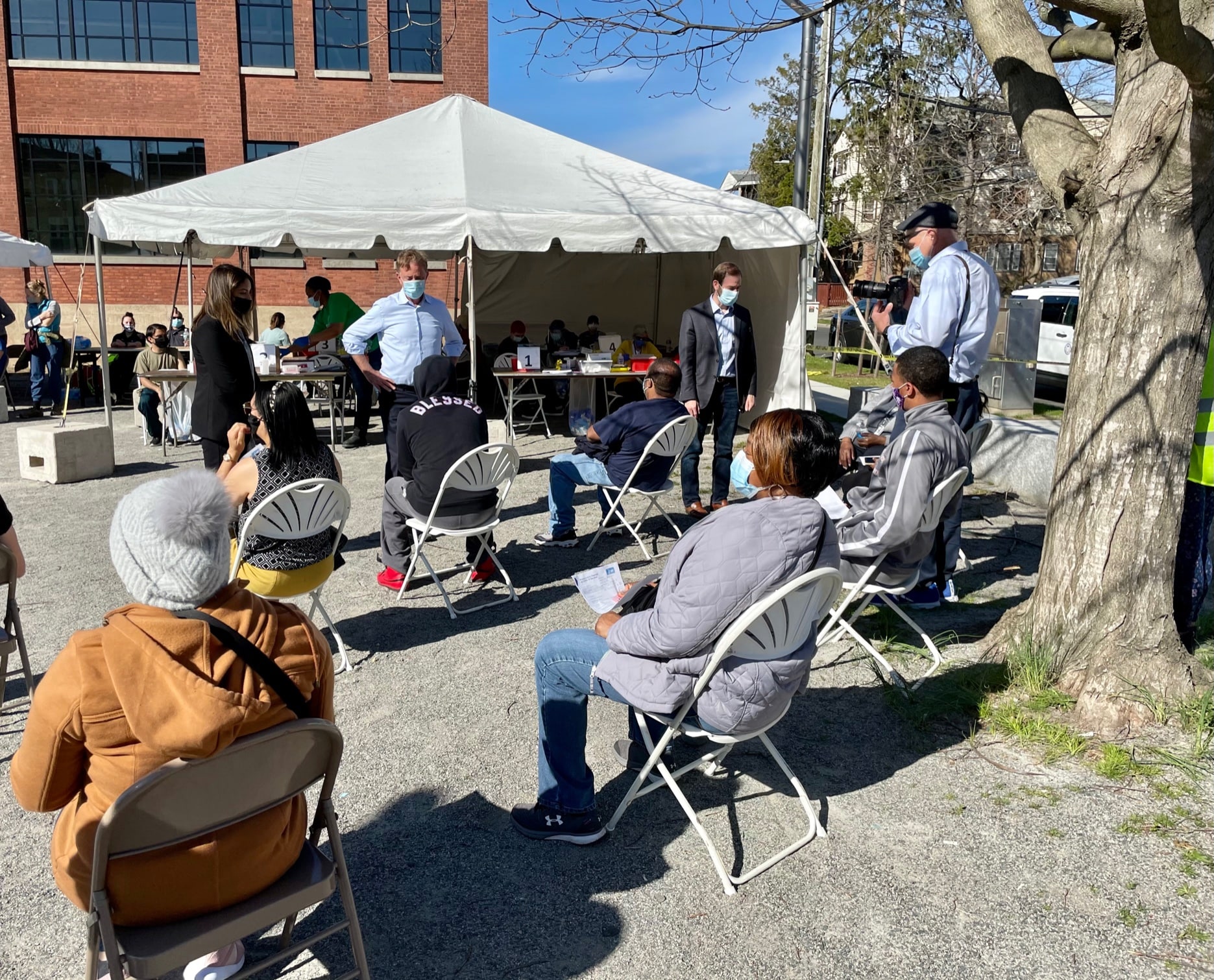 Gov. Ned Lamont, left, and Mayor Luke Bronin were greeters at a walk-up vaccination clinic in Hartford on Tuesday.

The late-afternoon sun shone warmly Tuesday on a triangular asphalt patch outside an old factory at five points, a crazy-busy intersection in Hartford’s North End. Joe Wilson sat on a folding chair, clutching a ticket, waiting for his number to be called.

Wilson ambled over to a white tent, rolled up his sleeve and became the 121st person to be vaccinated at a clinic that materialized after lunch and would disappear before supper hit the table in most of the triple-deckers in the neighborhood.

“A big part of our effort to get our community vaccinated is to remove every barrier, to make it as easy as possible,” Mayor Luke Bronin said. “And one of the biggest ways we’re doing that is by holding these walk up clinics where you don’t need an appointment, where you can come right up if you’re a Hartford resident and get yourself protected from the virus.”

That’s what outreach looks like in Hartford, one of the cities working to catch up to the rest of the state in vaccinating its residents against COVID-19. The city has fixed clinics, mass vaccination sites and the walk-up pop-ups — pretty much one every day.

On Wednesday, city health workers will be at the other end of the city, operating a walk-up vaccination clinic at the Free Center at 460 New Britain Ave., starting at 2:00 p.m. and running to 6:30 p.m. The other sites are open to anyone who has an appointment. The walk-ups are for city residents only.

“If you’re undocumented, we will vaccinate you as well, just bring mail that has a city of Hartford address and is less than 90 days old,” said Liany E. Arroyo, director of health and human services. “These clinics are open to everyone that is a Hartford resident.”

Arroyo said the walk-up pop-ups serve a twin purpose — they are easily accessible, and they serve as open-air advertisements. People see their neighbors getting vaccinated as they walk by.

The walk-up clinics offer the Johnson & Johnson vaccine, which requires only one shot to be effective. Wilson said he was happy to be told it was J&J, one and done.

Bronin and Gov. Ned Lamont were among the greeters Tuesday outside the former Swift Gold Leaf factory, the source of 300 neighborhood jobs before it closed in 2005. The gold leaf on the dome high above Lamont’s office at the Capitol was produced by Swift. The factory was refurbished last year as incubator space and a commercial kitchen.

The daily release of COVID data by the state was not encouraging: 1,074 new cases, a positivity rate of 5%. Hospitalizations inched upward, 21 new patients. And there were seven more deaths.

High vaccinations rates among the older cohorts are driving down the death rate. Connecticut opened vaccinations on April 1 to anyone 16 or older, and state officials are eager to see transmissions fall as vaccinations of younger people go up.

Lamont mentioned a conference call earlier Tuesday with Dr. Anthony Fauci, the director of the National Institute of Allergy and Infectious Diseases, and a talk the previous day with an adviser, Dr. Scott Gottlieb, the former Food and Drug Administration commissioner.

“They were both hopeful that you start seeing infection rates trending down in about a month. And I’m hopeful that they’re right,” Lamont said.

Attendance at the clinic Tuesday skewed middle-aged and older, a concern to the mayor. City health officials are now doing outreach in the schools.

Seemingly on cue, 18-year-old D.V. Greenwood arrived, pushing a blue mountain bike and wearing a black shirt and a white logo that pronounced him “forever young.”

Greenwood had been called by Tryrone Walker, his mentor.

“There was never any doubt that I’d get it,” said Greenwood, a student at the University High School of Science and Engineering. But some of his contemporaries were either wary or disinterested. “They were talking about a microchip and other stuff, racial stuff.”

Greenwood was handed a ticket, number 140. The clinic had enough doses for 250 people. Walker told him to call his mother and tell her they had slots. She wasn’t sure if she could make it.

Arroyo said some of the clients show up uncertain.

“I’ve heard questions about myths that exist about the vaccines, and so we answer them honestly, provide them information that we have, and then help them make that decision,” Arroyo said. “But ultimately, it is their decision to make.”