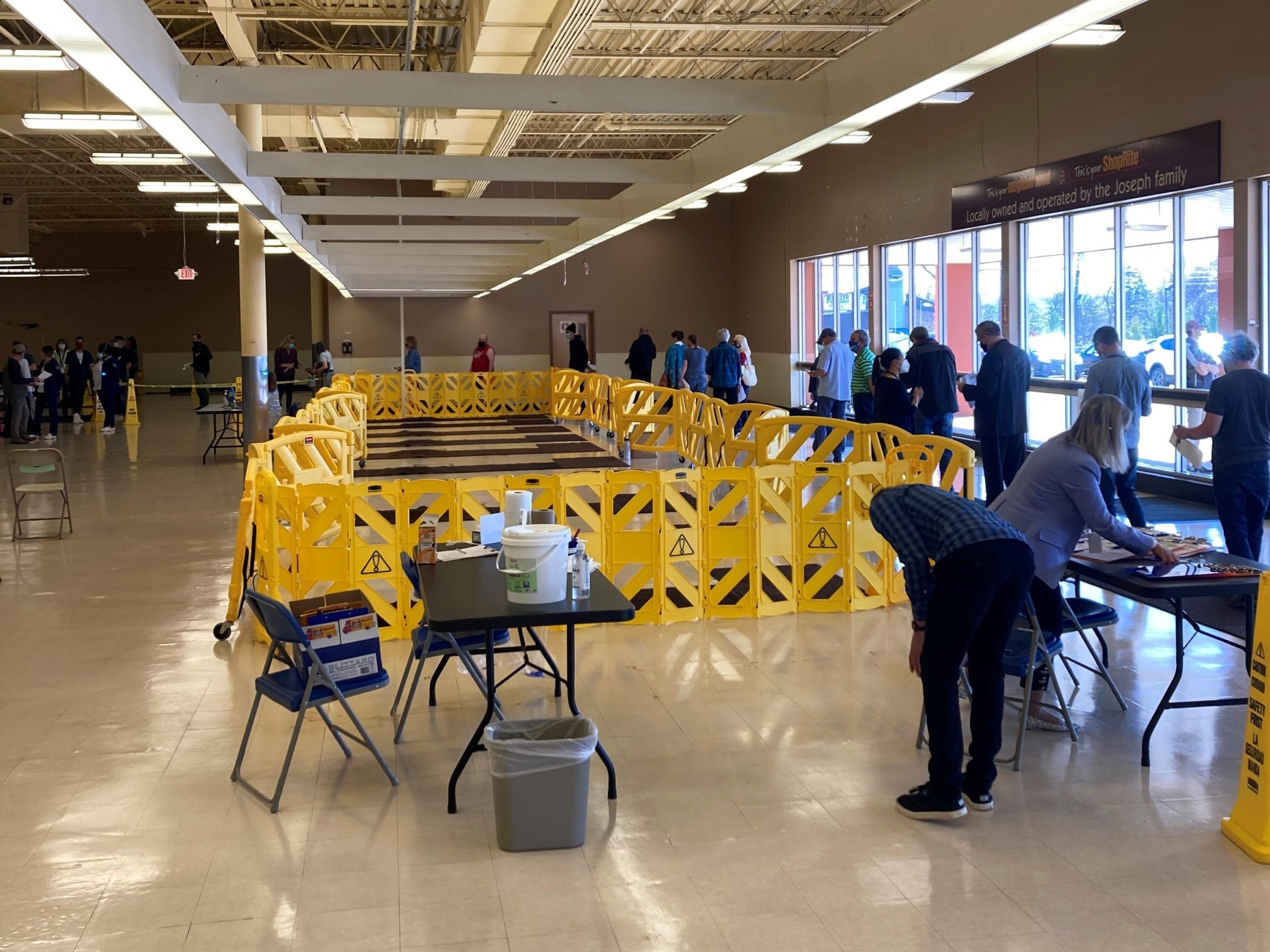 The West Hartford/Bloomfield Health District opened a new mass vaccination clinic in an abandoned Shop Rite grocery store on the West Hartford/Hartford town line. Some 400 people were vaccinated there on Thursday, April 8, 2021.

While manufacturing problems will delay thousands of Johnson & Johnson COVID-19 vaccine doses from reaching Connecticut in the coming weeks, Gov. Ned Lamont remained optimistic Thursday that a majority of residents will be at least partially immunized against the coronavirus by the end of April.

Lamont also used his Thursday briefing on the pandemic to urge young adults to get vaccinated, warning they otherwise could play a key role in spreading the virus.

“I think things are stabilizing,” Lamont said, noting that 49% of the eligible Connecticut population — individuals age 16 and older — have received at least one dose of the vaccine.

The administration recently projected that 60% of this group would be vaccinated by mid-April.

But Lamont said that could be complicated by recent problems at a Johnson & Johnson manufacturing facility in Maryland. The Baltimore Sun reported March 31 that millions of doses were wasted because of an error at the plant there.

Unlike the vaccines produced by Pfizer and Moderna — which require two doses — Johnson & Johnson requires only one.

But the administration learned this week that it would be receiving only about 6,000 Johnson & Johnson doses next week, and about 2,000 the week after that. It had been anticipating about 20,000 per week.

Josh Geballe, Lamont’s chief operating officer, said that shouldn’t pose a major problem, since the state is getting about 88,000 doses of the Pfizer and Moderna vaccines combined over each of next two weeks, slightly more than normal.

“We’ll be able to stay very busy and largely on track,” Geballe said, adding that some drop-off in Johnson & Johnson doses had been anticipated even before the manufacturing issues arose and that by mid- to late May, Connecticut’s vaccine allocation should have a surplus of doses.

The state allocation is used chiefly to supply hospitals, local health districts, most mass vaccination sites, and some federally qualified health clinics. Federal health agencies directly supply vaccines to other clinics and most pharmacies in Connecticut.

The biggest challenge facing the state, Lamont said, might be getting young adults more enthusiastic about the vaccine.

While 49% of the eligible population has received at least one dose so far, just 23% of those between 16 and 44 have been at least partially vaccinated so far. That group has been eligible to register for the vaccine only since April 1, but Lamont said he wants to drive up participation as soon as possible.

Though young adults are less likely than older ones to get a severe case of COVID-19, that doesn’t mean they aren’t at risk, the governor said, adding they also can spread the virus.

“Nobody is immune,” he said. “The only thing that makes you immune is when you get the vaccination.”

Lamont was joined at Thursday’s press conference by two 20-something politicians who were recently vaccinated — state Sen. Will Haskell, D-Westport, and Middletown City Councilor Ed Ford Jr., a Republican.

The governor also tried to entice young adults to get the vaccine by noting that Connecticut’s bars and nightclubs have been closed or severely restricted for much of the past year for public health and safety reasons.

“Maybe [when] a few more young people get vaccinated, we’ll feel more confident” about reopening them, he said.

As evidence that the pandemic is far from over, Lamont noted that while Thursday’s test infection rate was just 2.4% — the lowest daily rate in several weeks — the state still was facing infection hot spots in the Greater Waterbury and Naugatuck Valley areas.

Mobile vaccination vans would be dispatched to those regions in the next few days, the governor said.

The Johnson & Johnson vaccine issues also could complicate state efforts to fully vaccinate most college students in Connecticut before they leave campus later this spring.

But while the single-dose Johnson & Johnson vaccine may not be available to these students, the state expects to make Pfizer and Moderna doses available. These students then can arrange for the second doses they need to complete their vaccinations in their home communities.

Also Thursday, the administration reported that five people died over the previous day in Connecticut from the coronavirus, bringing the statewide total for the pandemic to 7,940.

And daily hospitalizations rose by one, bringing the statewide total to 515.