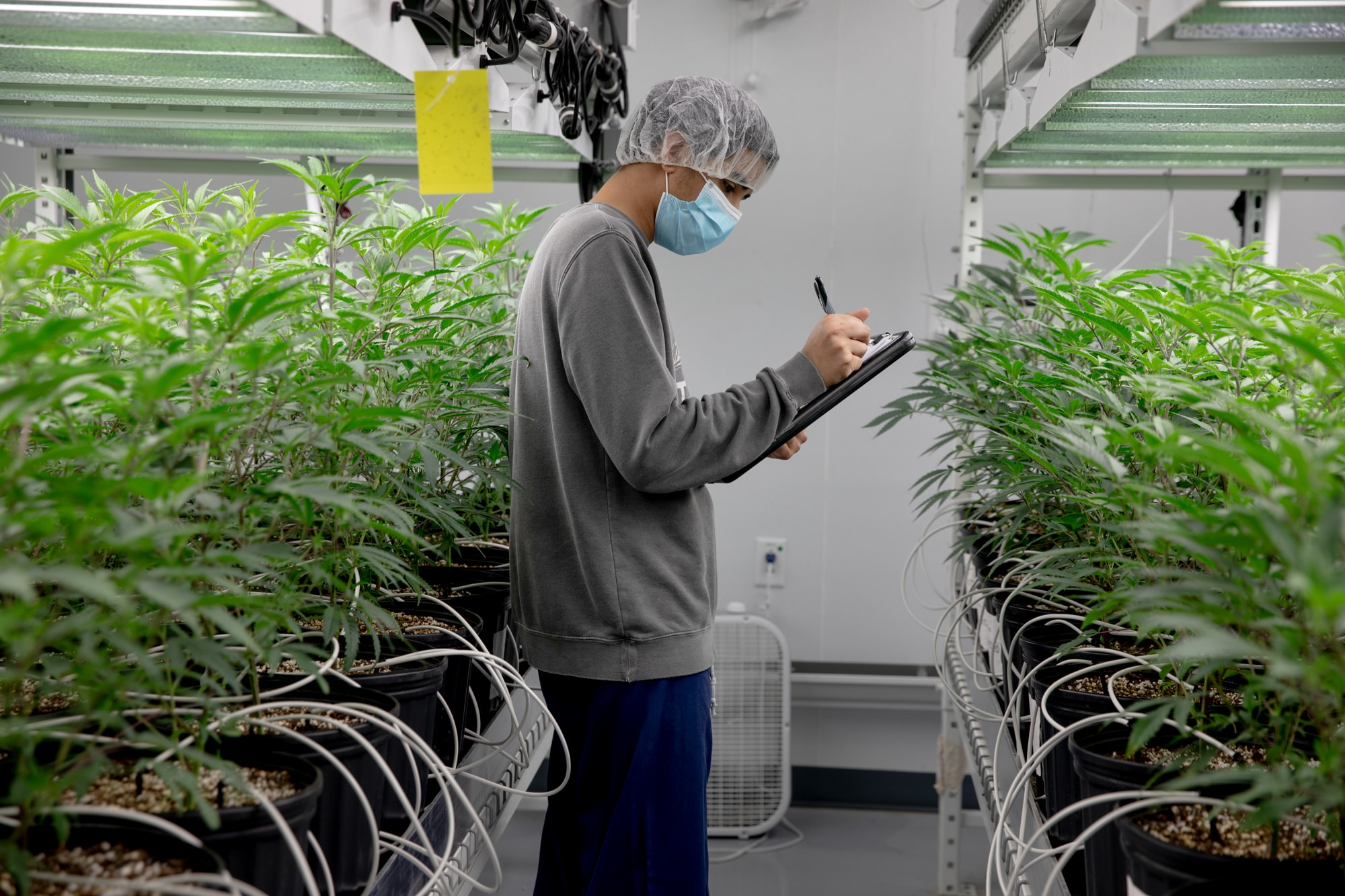 A CTPharma staff checks on the marijuana flowers at a facility that grows cannabis for the medical market.

Whether Connecticut joins New York and Massachusetts in legalizing recreational marijuana may turn on the ability of two prominent members of the legislature’s Black and Puerto Rican caucus to solve a puzzle of politics and numbers.

The lawmakers are House Majority Leader Jason Rojas, D-East Hartford, and Sen. Gary Winfield, D-New Haven, leaders of a cannabis working group. The puzzle is how to gain votes while resolving concerns of public health, economic opportunity and racial justice.

House Speaker Matt Ritter, D-Hartford, said crafting an acceptable bill is complicated by simple math: Passage in the 151-seat House requires 76 votes, and leaders believe there will be a minimum of 68 lawmakers opposed — every Republican and at least 15 Democrats.

That means Rojas and Winfield can lose the votes of no more than seven or eight House Democrats as they seek common ground among a mix of urban and suburban Democrats on the degree to which cannabis should be legalized and who should financially benefit.

(Democrats won a 97-54 majority in November, but the split is now 96-53 with two vacancies; one in a suburban district favoring Republicans, another in a Stamford district favoring Democrats. The vacancies will be filled by special elections this month.)

A key issue on the table is expunging criminal records for marijuana possession and creating social equity, generally seen as ensuring that communities impacted by the war on drugs share in business opportunities created by legal pot and benefit from resulting tax revenues.

“This is a complicated issue,” said DeVaughn Ward, senior legislative counsel to the Marijuana Policy Project. “Folks like to think that it’s just as easy as saying, ‘We’re gonna legalize cannabis.’ And that’s it. This is an issue that touches public safety, public health, economic development and criminal criminal justice. It’s a very complicated issue, a lot to be sorted out.”

Regardless of legalization in other states, Ward said, no one should be surprised that it’s a tough sell in Connecticut, a state that barred the retail sale of beer, wine and liquor on Sundays until a decade ago.

Based on polling, the question of legalization should be a “no brainer,” said Winfield, the co-chair of the legislature’s Judiciary Committee.

“But the General Assembly gets very cautious on these issues, and that’s the problem we have. Then you get beyond that threshold question,” Winfield said. “What does this whole scheme look like, particularly when it comes to issues of equity? Have we done enough there?”

The negotiations have focused on Senate Bill 888, the legalization bill proposed by the administration of Gov. Ned Lamont. With Winfield’s support, a revised version was approved by the Judiciary Committee last week on a 22-16 vote, with three Democrats opposed: Sens. Saud Anwar of South Windsor and Alex Kasser of Greenwich and Rep. Daniel Fox of Stamford.

Tensions have been high between the administration and some Democratic lawmakers who favor legalization but complain about what they say is the inadequacy of social equity provisions.

Rep. Robyn Porter, D-New Haven, voted for the bill in committee, but she harshly denounced language that considers hiring of employees from certain neighborhoods to be a form of social equity. In Illinois, a similar provision giving preference to hiring — but not ownership — was called a “slave master’s clause.”

Paul Mounds, the governor’s chief of staff, said the administration did not suggest the language, and he also reacted sharply to calling a job-training or hiring provision a “slave master’s clause.”

“The Lamont administration is actively engaged in the effort to legalize the adult use of cannabis that protects public health and safety while also firmly addressing the injustices of the war on drugs in an equitable responsible manner,” Mounds said in an email. “While the administration did not provide the referenced language, we will not respond to derisive rhetoric that prevents constructive dialogue and progress. While the governor is prepared to sign a bill that achieves those core goals, he is not inclined to sign just any bill.”

Rojas said the bill relied on language from many sources, and he was unsure who suggested the job-training and hiring language, which he noted was one part of a much longer definition of what might be required of social-equity applicants for licenses to produce, package or sell cannabis.

The “slave master” reference is not helpful to negotiations, but he understands Porter’s passion, Rojas said. “She has a way of expressing her viewpoints on things. I don’t know that that necessarily indicates that we’re at an impasse.”

The revised bill approved by the Judiciary Committee would create a Social Equity Commission charged with making recommendations for what would constitute “social equity,” both in terms of ownership and employment. It could be revised or removed if deemed offensive,  Rojas said.

While acknowledging what are expected to be tight voting margins, Rojas and Winfield said they remain optimistic that they can find language that is broadly acceptable.

“I’m hoping we get it done. We should get it done,” Porter said. “But I can tell you, if it’s not right, I don’t see it happening.”

Ritter and House Minority Leader Vincent J. Candelora, R-North Branford, each said they see no House Republican votes for legalization of the commercial sale of cannabis. Senate Minority Leader Kevin Kelly, R-Stratford, said he is personally opposed but offered no assessment of the rest of his caucus.

Candelora said some Republicans are open to limited legalization for home growing but not commercial-scale production and sale. The discussion so far largely has ignored public-health issues associated with legalization and focused on financial benefit, he said.

“We’re putting all this effort into who gets the money. And that’s really what this fight is over: Who gets what piece of pie?” Candelora said. “And I think that’s the wrong approach. Public health should come first, and the money should come second.”

The first vote would come in the Senate, where Democrats hold a 24-12 majority.,

“I’m optimistic we can get there, and we’ll have something for senators to vote on,” said Senate Majority Leader Bob Duff. “But it is a complicated piece of policy, and most states do it backwards from how we’re doing it.”

In most states with legal marijuana, passage was a two-step process: Legalization resolved by voters on a yes-or-no referendum question, then leaving legislators with the task of creating a licensing structure for its production and sale.

Rep. Josh Elliott, D-Hamden, an early and passionate backer of legalization, said he hopes a legalization bill comes to a vote this year, even if there is no assurance of passage, as Ritter has indicated he might do.

“There are so many voices on all sides of this thing. At some point you’ve just got to make a decision and run with it, ”Elliott said. “I just hope we don’t get struck by indecision.”