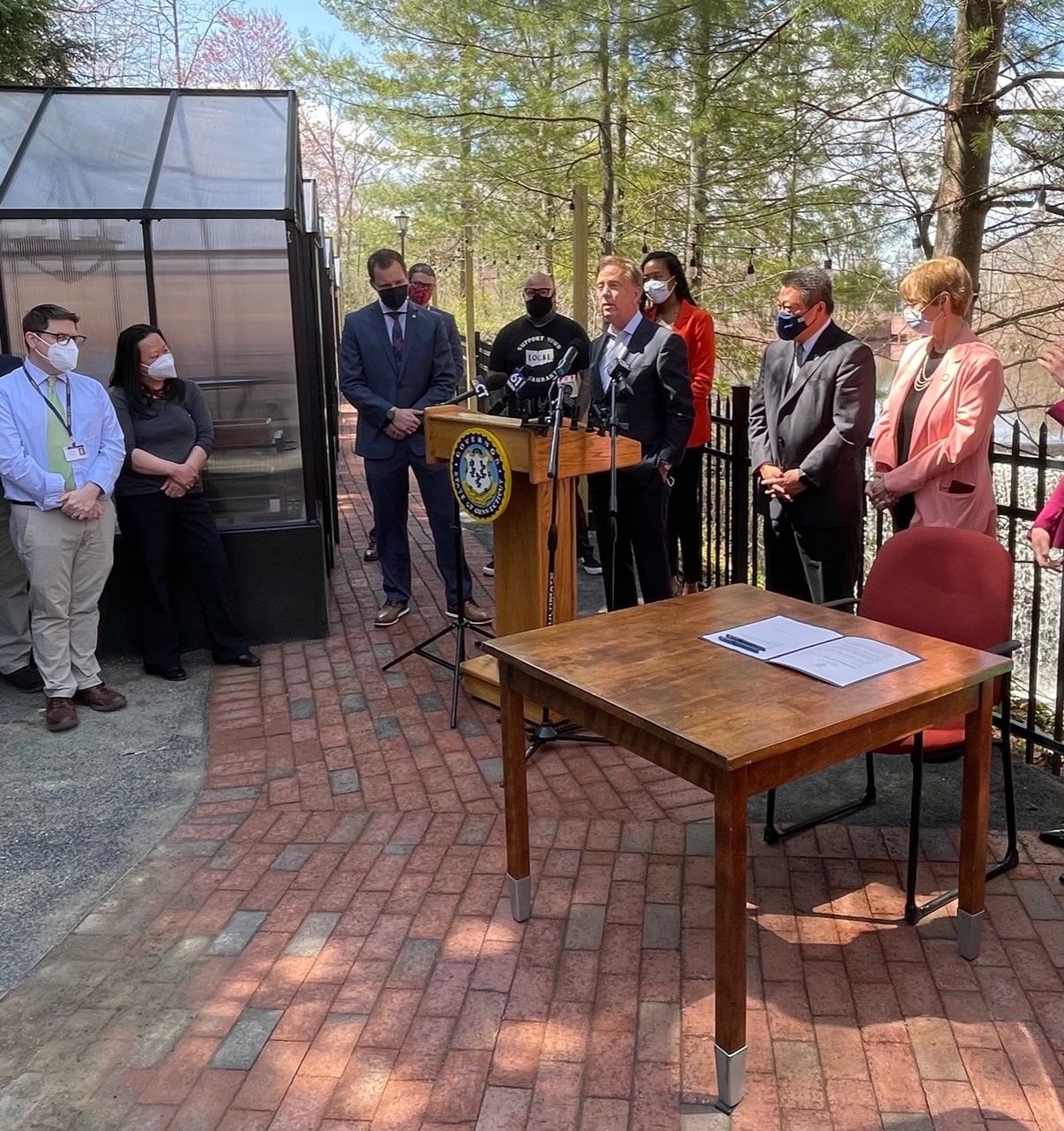 Gov. Ned Lamont was critical of the CDC at a bill signing ceremony.

Gov. Ned Lamont said Wednesday that he and other governors expressed dismay to the White House in a conference call Tuesday over the federal advisory that halted the use of the Johnson & Johnson vaccine over a possible link to extremely rare cerebral blood clots.

Even if the “pause” is ended in a matter of days, Lamont said he and other governors fear the damage to public confidence will be long-lasting, undermining public-health efforts to overcome hesitancy among several groups about all the COVID-19 vaccines.

“I just hope it doesn’t mean there’s a pause in people knowing how important it is to get vaccinated. That’s what I really worry about,” Lamont said.

Was the suspension recommendation by the Centers for Disease Control and Prevention an overreaction?

“I would have handled it differently,” Lamont replied sharply. “And I let them know that.”

Lamont was among the governors on a conference call Tuesday led by Jeff Zients, the White House coordinator on COVID-19. Lamont made his remarks Wednesday at a press conference after a bill signing.

In a brief interview after the news conference, Lamont said that the CDC could have alerted clinicians and the public to the possible link without halting the use of the vaccine at a pivotal moment: Most of those eager for the vaccine have been inoculated, and the challenge at achieving community immunity will turn on reaching the hesitant.

Six cases of cerebral venous sinus thrombosis were reported in the United States in women aged 18 to 48 within 13 days after vaccination with the Johnson & Johnson vaccine, the CDC and Food and Drug Administration said Tuesday.

At a rate of about one in a million, the incidence is lower than the cerebral blood clots expected in the general population — 2 to 14 people out of every million. The risk of all blood clots in women taking hormonal birth control pills is far higher, though still rare — one in 1,000.

But a secondary factor observed in the six Johnson & Johnson cases — the presence of thrombocytopenia, or low blood platelets — make the link a potential pattern. Whether any of the women were on the pill was not immediately known.

Lamont said those points are likely to be overlooked in the news of the suspension.

“You and I know what it meant, but to a lot of people it was ‘vaccines are unsafe,’” Lamont said. He described one Republican governor on the White House call as furiously saying, “One in a million? I’m going to have 50,000 fewer people vaccinated next week.”

Lamont said the governors pointedly noted the bigger risk may well be more fatalities from COVID-19, which is blamed for nearly 8,000 deaths in Connecticut and more than 560,000 in the United States.

“We’ve had a lot of vaccines, a lot of people have gotten vaccinated,” Lamont said. “Now we’re trying to get those who are a little more hesitant to get vaccinated, and the CDC sent out a signal that was not helpful.”

In a Quinnipiac University poll conducted before the ordered pause in the Johnson & Johnson vaccine, 27% of Americans said they did not plan to be vaccinated against COVID-19. Roughly two-thirds said they had been vaccinated or planned to get vaccinated.

The poll released Wednesday found 57% concerned about another surge in cases. By a margin of 53% to 43%, Americans favored states requiring the wearing of masks as a precaution.

Vaccine passports showing an individual was inoculated was deemed a good idea, though by a small margin: 49% to 45%.

Lamont’s views of the CDC pause put him in the awkward position of criticizing the Biden administration and siding with former President Donald J. Trump, at least narrowly. Trump called the pause a blow to the reputation of the vaccine and “a terrible disservice to people throughout the world.”

The former president hinted at a darker motive suggesting the FDA preferred the Pfizer vaccine. Lamont took a more positive view, saying the public should take some comfort in the caution exhibited by the FDA and the CDC.

“One in the million is like getting hit by lightning,” Lamont said. “So this should give you a confidence that they’re not rushing any vaccines out there — and whatever is out there is very safe.”