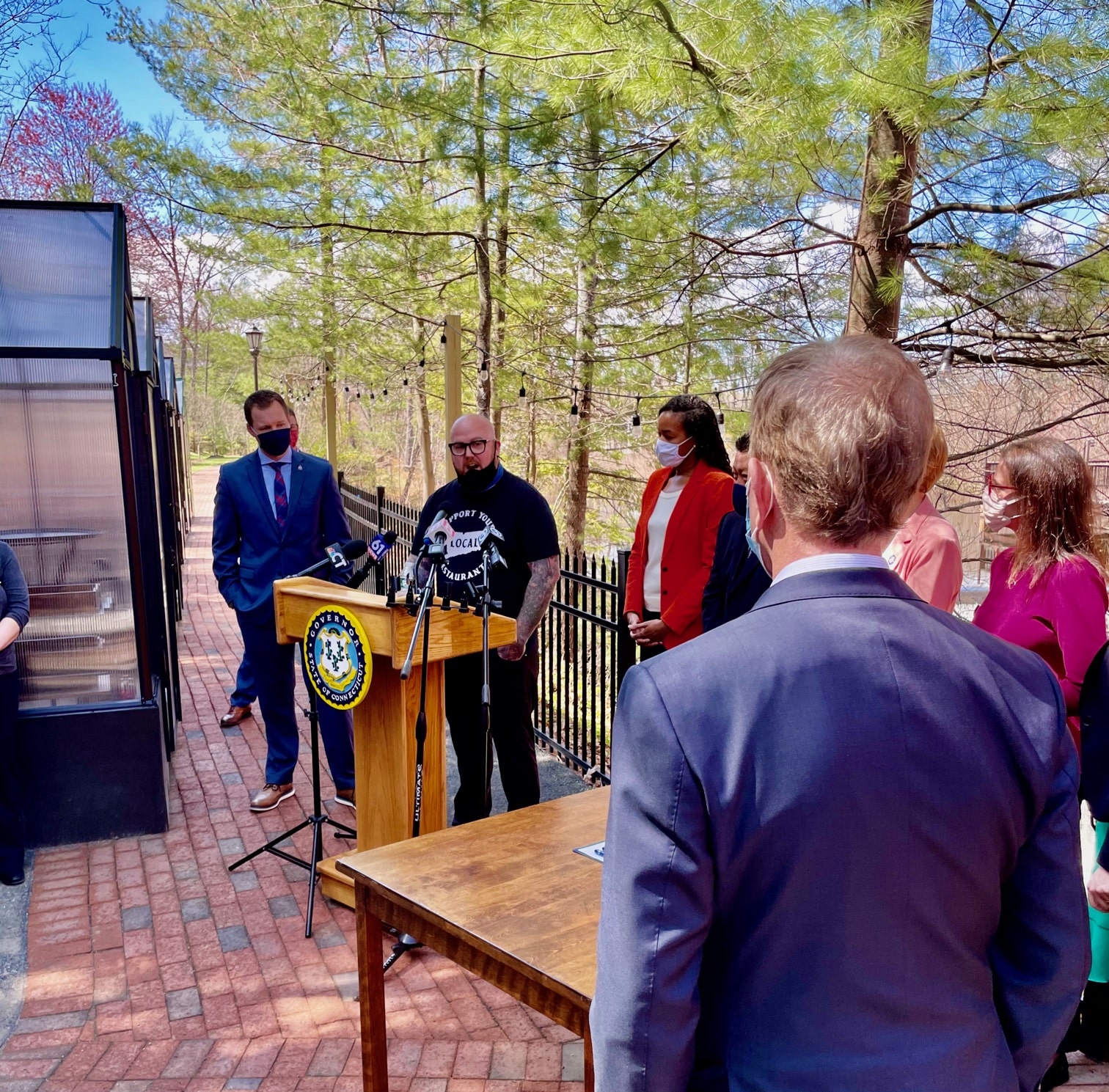 Tyler Anderson, the chef and owner of Millwright’s, thanks Gov. Ned Lamont for cutting red tape on outdoor dining. To his right is Scott Dolch, the head of the Connecticut Restaurant Association.

SIMSBURY — Each small greenhouse — along a public walkway, overlooking a waterfall — held a single dining table beneath a chandelier. Behind them snaked an umbilical, connecting to an HVAC system that Tyler Anderson says cleans air faster than the ones in hospital ICUs.

Costing more than $5,000 each, the seven greenhouses went up in October as a shield against the autumn chill and the loss of the outdoor dining that kept Anderson’s restaurant, Millwright’s, alive after Gov. Ned Lamont banned indoor dining due to COVID-19.

Anderson told Lamont that the greenhouses, plus a train-like line of cozy two-person compartments on the covered bridge connecting his outdoor dining to the rest of his dining-and-drinking spaces, were among the “silly things” tried during the pandemic.

On Wednesday, he welcomed the governor and a bipartisan group of lawmakers and municipal officials as unlikely partners in keeping Millwright’s and thousands of other Connecticut restaurants alive, even as 600 others failed.

The occasion was the ceremonial signing of a law that extends for another year the executive order Lamont issued last spring that simplified and fast-tracked the regulatory process used by Anderson and other beleaguered restaurateurs to establish or expand outdoor dining.

One year and a month after Lamont declared an emergency granting him extraordinary powers, two things are clear: The restaurant industry suffered deeper financial losses than most, and helping them was politically popular — even when bumping against “home rule,” the New England notion that all land use decisions are best made locally.

The legislature’s Planning and Development Committee has been a battleground this year over questions of whether local zoning is too restrictive, especially regarding housing. But when it comes to saving restaurants, the idea of the state nudging local zoning officials was embraced. 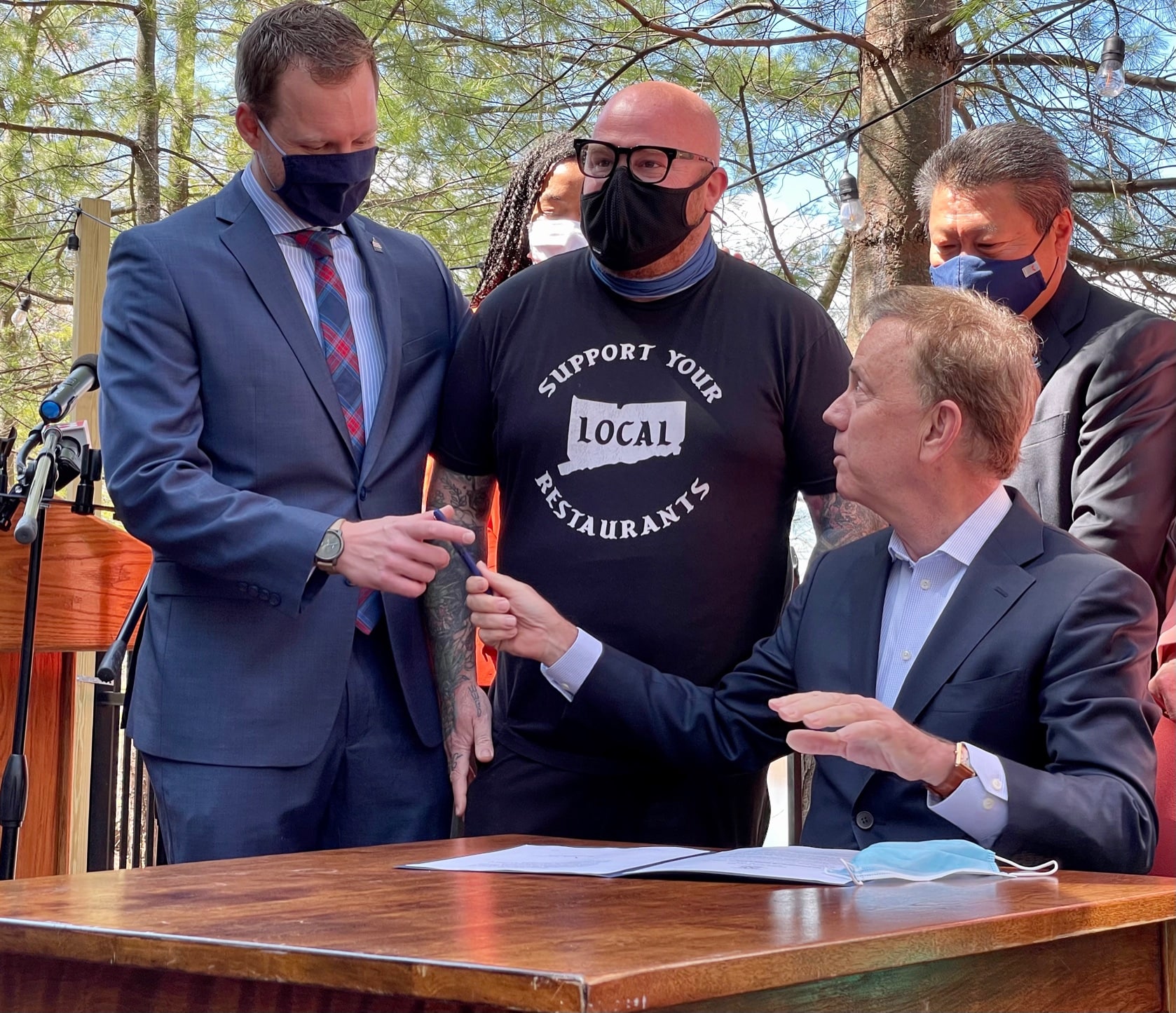 “It really was a collaborative team effort and a way to allow our businesses to streamline the process through local zoning. And it really does make a difference,” said Rep. Cristin McCarthy Vahey, D-Fairfield, co-chair of Planning and Development. “We’ve been talking a lot about zoning, and we certainly will be in the session to come. This is an example of why and how it’s important to make efforts that are easy and simple for our businesses so that they can thrive.”

Sen. Tony Hwang, R-Fairfield, the ranking member of the committee, was fulsome in his praise of Lamont, leading a parade of Democrats and Republicans who sang the praises of collaboration and cooperation — state and local, public and private. 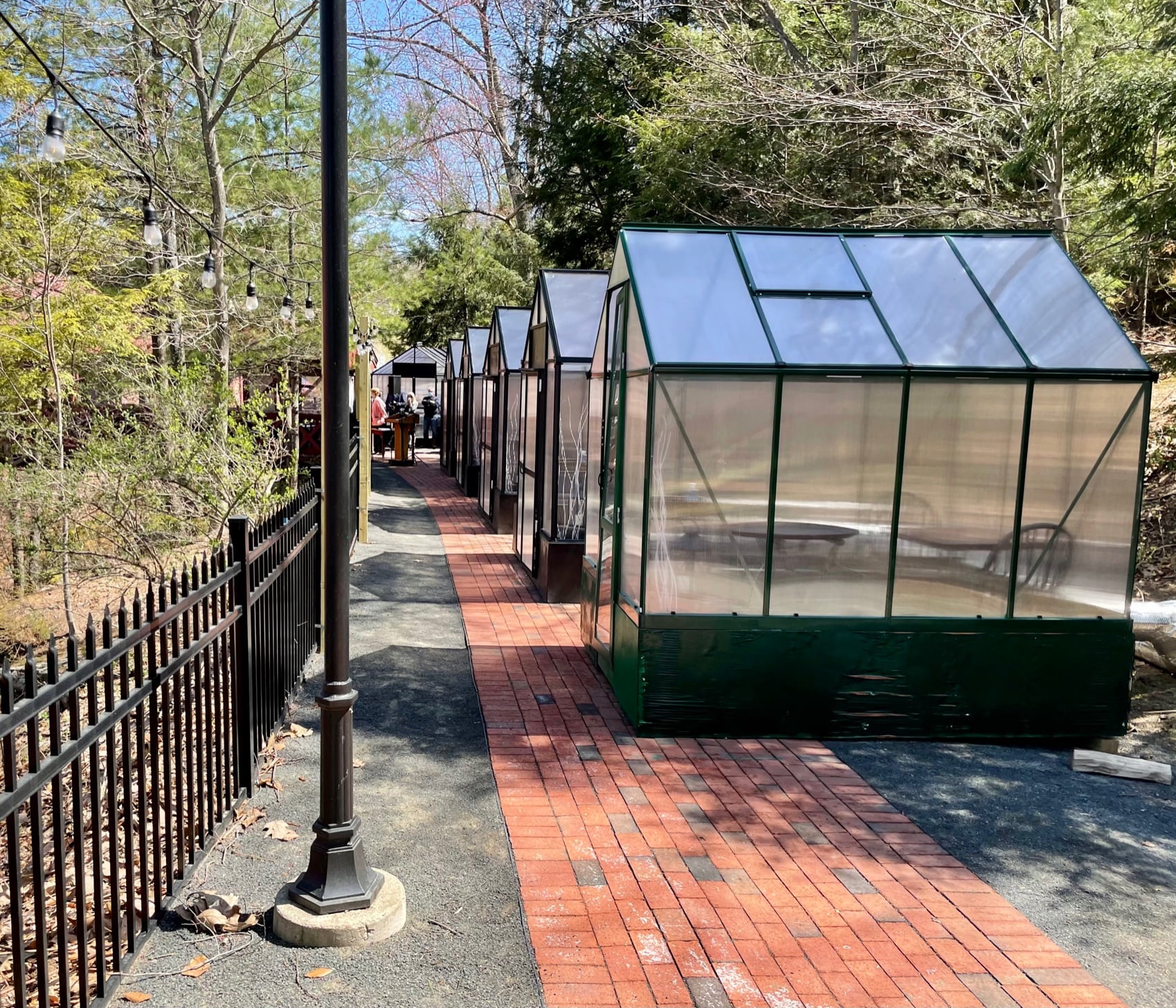 Millwright’s constructed dining greenhouses in a linear park outside the restaurants, providing private and COVID-safe dining.

It did not come easily. Lamont  recalled tense meetings with Scott Dolch, the executive director of the Connecticut Restaurant Association, and David Lehman, the governor’s touchpoint for business restrictions and reopening as the commissioner of economic development.

Dolch agreed and made the tactical decision to avoid open warfare or litigation with the governor’s administration, preferring to position the governor as an ally, an eventual spokesman for the safety of restaurant dining.

The governor’s office and Dolch collaborated on the ceremonial bill signing. The event had no legal significance but offered a messaging opportunity in a scenic locale for the governor, the industry and lawmakers eager to associate themselves with the effort.

Greenhouses erected of desperation and necessity have become attractions, Dolch said. They have one seating at each mealtime, providing an element of exclusivity, as well as safety for patrons and staff.

“Now it’s a destination where people want to come, and more restaurants are doing that. And that’s what this bill does. This bill isn’t just about normal patios, this is allowing every restaurant a chance to work with their town,” Dolch said. “That’s the biggest piece about today. It’s about recovery. We’re on that path.”

Lamont first banned indoor dining, then allowed its eventual return — at 50% of capacity, then 75% and now 100%. But the 100% is misleading, because safety rules that remain require either Plexiglass separations or six feet between tables.

Millwright’s has an indoor seating capacity of 280, but some of it is in space that does not lend itself to spacing or separations. It also included private dining rooms, and event business remains slow. Overall, Anderson said, he can seat about 150, including 54 outdoors in spaces that can accept only one seating a night.

“We just make sure that they’re sold on a nightly basis,” Anderson said. “So there’s a little bit of a premium involved in that.”

Simsbury approved the greenhouses, but the state initially objected, questioning if Anderson was just creating another form of indoor dining. Local lawmakers like Rep. Eleni Kavros DeGraw, a Democrat from neighboring Avon, and others intervened. The governor’s office backed them.

“It’s just an extraordinary thing. I worked in restaurants for many years. I know how small the margins are, I know what this means, not just to the owners and the managing partners of these restaurants, but to all the employees,” she said.

“I couldn’t say no to an invitation to speak here. Because a little over seven years ago, I was engaged there,” he said, pointing to a spot by the water where he proposed. “So I’m glad to see this restaurant still thriving, and I’m still married. So it’s worked out really well.” 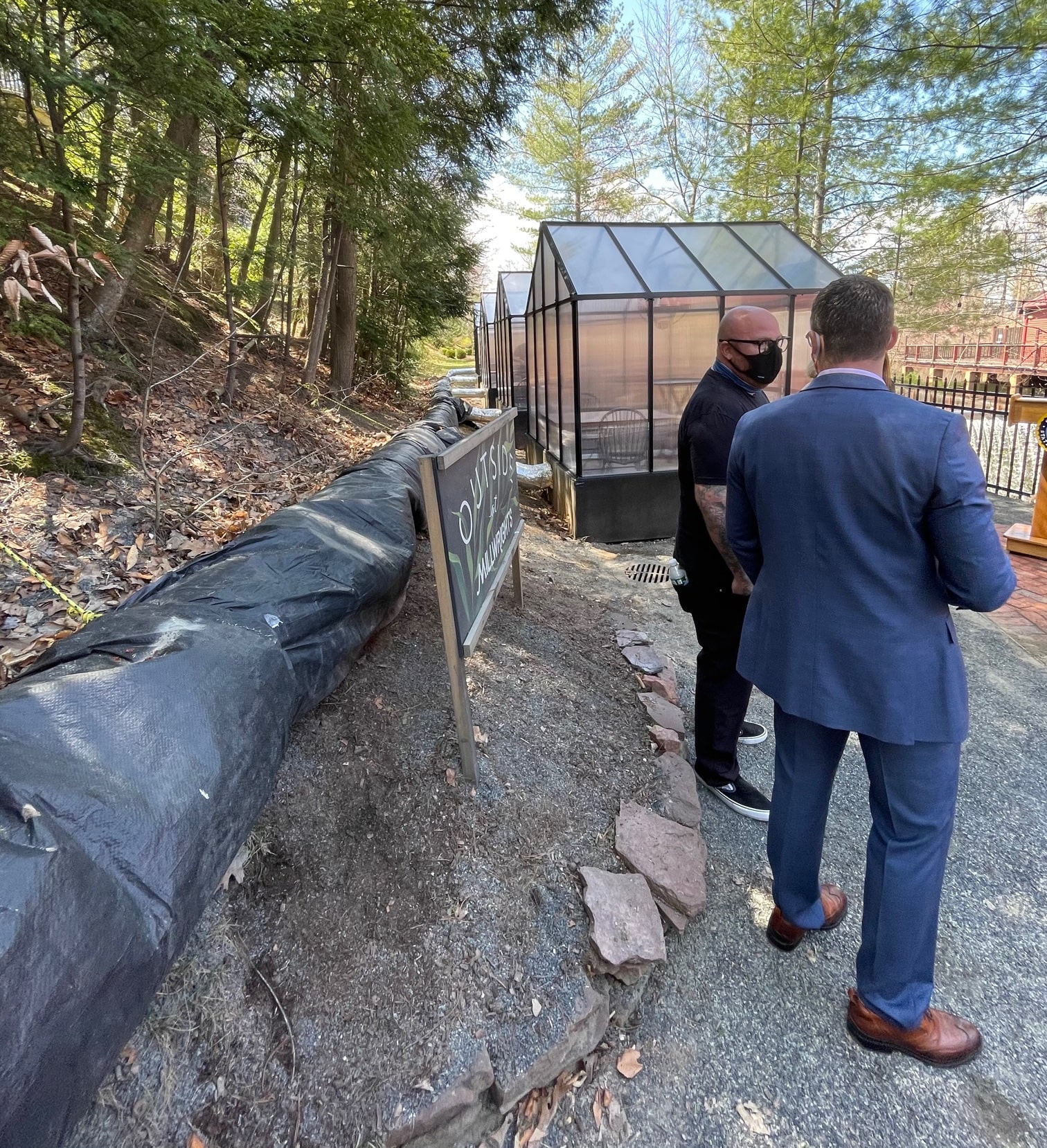 Behind the dining greenhouses, an umbilical connects each one to an air handling system that the owner says changes the air in each room every few minutes.