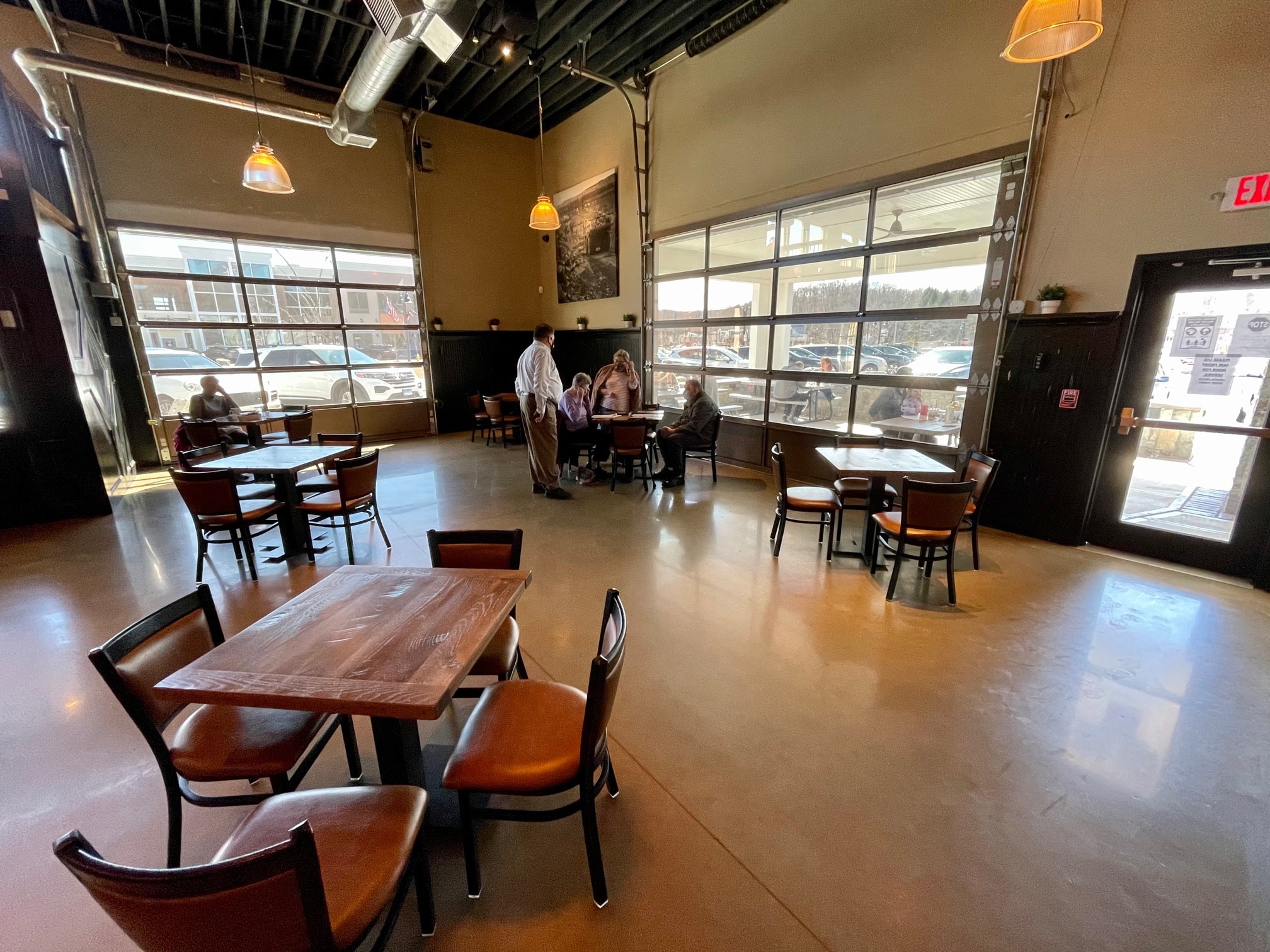 A year of loss. A year of lessons.
Restaurants were the hardest hit industry by COVID closures. But they had a plan.

Six-feet spacing rules will continue to limit the capacity of his restaurant, even after a 50% capacity limit is lifted Friday.  |   photo by: MARK PAZNIOKAS :: CTMIRROR.ORG

Editor’s Note: This is one in a series of stories the CT Mirror will publish over the next few weeks examining aspects of the year we’ve endured in pandemic lockdown. Below is a look at the restaurant industry, which was shut down a year ago today in an attempt to slow the spread of COVID-19 and will be allowed to reopen at full capacity on Friday, March 19.

The young host promptly greeted the lunchtime patron to the Sitting Duck Tavern in Oxford. But the customer, a tall man in a black T-shirt with a helicopter logo, didn’t want a table, not without looking first. He scanned the restaurant, then left.

Flat-screen televisions played above a polished copper-topped bar, where no one sat. The main dining room was sparsely furnished, just a half-dozen tables spaced at least six feet apart, a requirement to offer indoor dining in the time of COVID-19.

Whatever the man saw or didn’t see, it passed muster. He returned with a companion and sat down to lunch, a small victory in the eyes of Dave Rutigliano, who owns the place with his two long-time partners, brothers Bill and Mark DaSilva.

“He had to be comfortable,” Rutigliano said.

Rutigliano is a double major in the study of human behavior. He’s been a full-time restaurateur for more than two decades and a part-time state legislator for nine. He says his industry’s nascent recovery is about feeding consumer confidence, not lifting pandemic restrictions.

That belief informed nearly every decision of the Connecticut Restaurant Association since a year ago, when Gov. Ned Lamont unilaterally closed every restaurant and drinking hole, an order that took effect at 8 p.m. on the eve of St. Patrick’s Day.

To a bar owner, it was like canceling Christmas on Christmas Eve, only worse. Not only were the cash registers silent, but the refrigerators were packed with corned beef, hundreds of pounds of it in Rutigliano’s case. He laughs about it now, but barely.

In Michigan, the restaurants sued the governor, as did one bar owner in Connecticut. But the industry trade group, guided by a relatively new executive director, Scott Dolch, settled on a strategy of constructive engagement with the Lamont administration.

It was not without dissent, even as Lamont permitted a slow reopening, beginning on May 20. But they stayed the course, even as about 600 of the state’s 8,500 restaurants went out of business, one of them owned by Rutigliano and the DaSilva brothers.

The industry employed between 100,000 and 160,000 in Connecticut before the pandemic, industry and state officials estimated.

People were angry. They were frightened. Some of them were association board members, Dolch’s bosses.

“Their initial reaction was to fight back and push and make it, make it a little bit of warfare,” Dolch said. “You can imagine, people were like, ‘Oh, you’re part of Lamont’s cronies.’ Like, ‘Why don’t you just go work for Lamont?’ I got that all the time.”

Dan Meiser, the president of the association and the owner of four restaurants, including the Oyster Club and Engine Room in Mystic, was not among them, even as the loss of business forced him to temporarily shutter Oyster Club on New Year’s Day. It just reopened.

For us to have engaged in a war with the governor’s office and publicly blasted them, I don’t believe, would have changed the reality, and I can almost say with certainty that it would have closed down or limited the conversation and our ability to have a seat at the table. ”— Dan Meiser

At Dolch’s urging, Meiser joined the governor’s advisory group on reopening. He established a rapport with David Lehman, the former Goldman Sachs partner who joined the administration to oversee economic development, only to end up as a pandemic liaison to a battered restaurant industry.

Slowly, they tried to balance economic survival against public health, trying to approximate a cost-benefit analysis for every restriction and every relaxation of a restriction, regulation or statute.

“It was really hard initially, because there was no easy answer, other than trying to afford them more flexibility, and then slowly open and work with them on things from as simple as the typical dining room setup and cleaning protocols to events and how dance floors should work and how bars can work at a private party,” Lehman said. “So it’s really run the gamut.”

Two of the governor’s executive orders were broadly applauded. One cut the red tape necessary to greatly expand outdoor dining. Another saved the restaurants from pandemic-related layoffs contributing to rate increases in unemployment insurance. 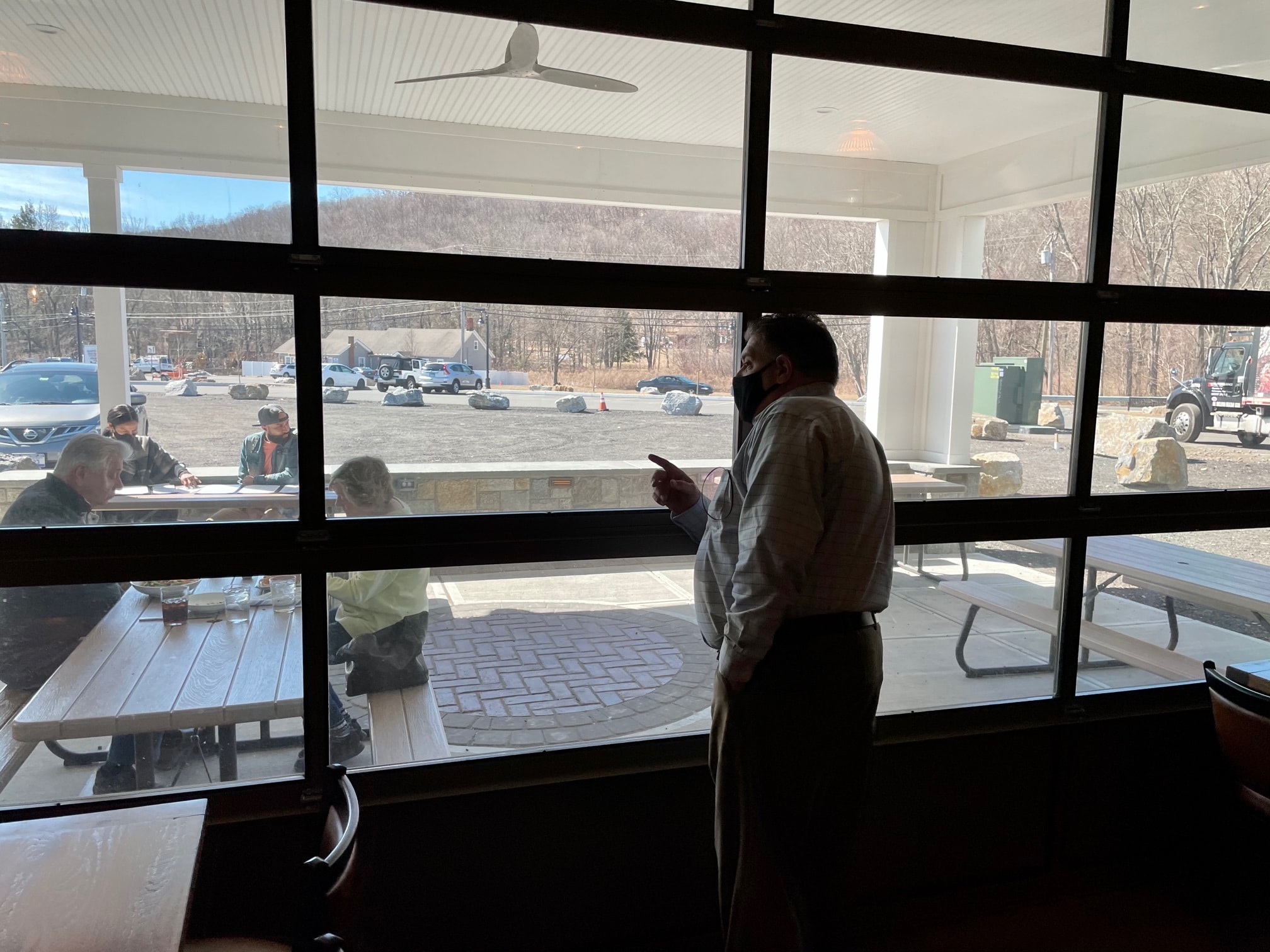 On an unseasonably warm late winter day, Dave Rutigliano counts the diners on the patio. He says outdoor dining has even a savior during the pandemic.

Dolch had been with the association for less than two years when the pandemic struck. He came to Connecticut from Maryland to play football at Central Connecticut State University. As the starting quarterback and its co-captain, he led the Blue Devils to a championship his senior year in 2004.

His earlier jobs were in sports marketing at UConn, UMass-Lowell, the University of Hartford and the Travelers Championship. With little political experience, he relied on the association’s lobbyist, Nicole Griffin, for advice in dealing with lawmakers on issues like the minimum wage. For help in messaging, he hired Brian Durand, a political operative who had been the chief of staff to Gov. Dannel P. Malloy.

Dolch said Durand counseled him to play a long game, establishing and maintaining a working relationship with the administration, even when opposing certain policies, such as a curfew. They talked about how hard to push, with Durand advising him to be mindful of how any battle with the governor would play with customers.

To declare war on Lamont’s closure order and later restrictions would force the administration to defend them as a necessary protection of public health, most likely casting restaurants as just another business trying to preserve cash flow. It was not a debate they wanted to have.

Meiser said most restaurant owners reached two conclusions: One, lifting restrictions while consumers were uneasy about the spread of COVID would gain little or nothing; and two, the governor could be an important ally in rebuilding consumer confidence at the right time.

“For us to have engaged in a war with the governor’s office and publicly blasted them, I don’t believe, would have changed the reality, and I can almost say with certainty that it would have closed down or limited the conversation and our ability to have a seat at the table,” Meiser said.

In the early weeks of the pandemic, Lamont conducted daily televised briefings at 4 p.m., explaining that the tight restrictions on commercial and social life were necessary to flatten the quickly accelerating virus. Dolch and Meiser said they concluded that the same governor who advised everyone to stay home could be the best person to tell them it was safe to go out.

Lamont allowed outdoor dining on May 20 then permitted limited indoor dining on June 17, just ahead of Father’s Day. Capacity was limited to 50%, and tables had to be separated by six feet or Plexiglas partitions. It put Connecticut ahead of most nearby states. 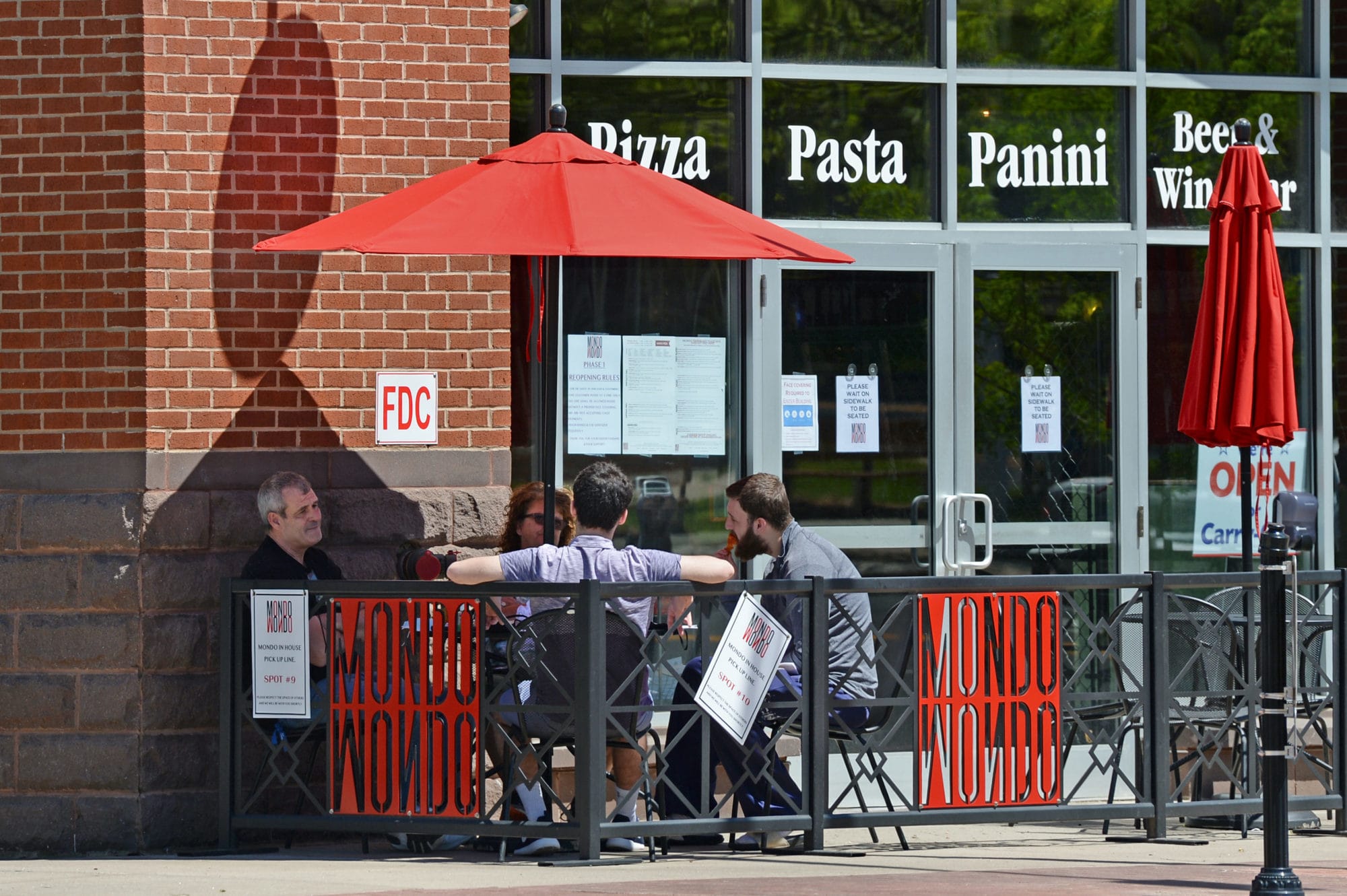 Diners enjoy a meal outdoors on the patio of Mondo’s in Middletown last May on the first day restaurants were allowed to open for outdoor dining only since the state ordered most businesses closed due to the COVID-19 pandemic.

“Messaging from those 4 o’clock briefings is really what, in my experience, in talking to our guests, drove their decision-making,” Meiser said. “I mean they literally took as gospel that if this governor and the Department of Public Health are saying that it’s OK to go inside as long as we’re six-foot spacing, then we’re going to do that.”

Rutigliano praised the leadership of the association, even if he lashed out on Twitter when the governor extended the closure orders for another six weeks, a move he saw then as premature. He tweeted, “@GovNedLamont its time to open up.”

The quickly deleted tweet was the product of stress, he said. He had just left a friend who was facing the failure of a restaurant opened just five months before the pandemic, and he had recently laid off 310 of his 345 employees.

In hindsight, he said, nothing was going to bring back business last April.

“Truthfully, it’s a confidence game,” said Rutigliano, a Republican who represents Trumbull in the House of Representatives. “There were months where people just didn’t feel confident coming out to a restaurant. So I swear to you, in April, May and June, he could have just said, ‘OK, there’s no restrictions.’ It wouldn’t have mattered.”

The Sitting Duck Tavern in Oxford had been open for a few weeks before the pandemic. It was one of eight restaurants Rutigliano and his partners owned a year ago. Today, they have seven.

”We lost Norwalk. Norwalk never came back. We were down 80% plus in Norwalk from the day that pandemic hit,” Rutigliano said. “The city refused us outdoor dining, because it blocked something, and it never came back. And we had to close it in July.”

Rutigliano said he believes in the efficacy of wearing masks, in vaccinations and rigorous rules for cleaning and hand washing. But he hopes one day researchers will determine if complete closures were necessary.

“Did the lockdowns work? Can anybody actually say that closing my business, this business, worked?” he said. “If you could show me evidence that it worked, I’m happy to listen to you.”

But, he added, that was not a criticism of the governor, who he viewed as responsive to the industry, even if he didn’t always take its recommendations.

On Friday, the 50% capacity limit on restaurants ends, but the requirements of six-foot spacing or Plexiglas petitions will remain. With the governor poised to relinquish his emergency powers on April 20, the legislature is expected to pass a law extending the easy access to outdoor dining permits for another year.

Lehman, Rutigliano and Dolch testified in support of the law at a public hearing on Monday.

Rutigliano and Meiser said the end of the 50% limit will make no practical difference in how many diners they can seat. But it is significant, nonetheless.

“Are we going to be able to get more people in our restaurants on March 19 versus today? Probably not,” Meiser said. “Will we have more people show up, to come and try to get a reservation? I sure hope so — and I believe so.”

The lifting of the capacity limits sends a message from the governor and public health officials that it’s safe, he said.

And that, Meiser said, was the long game.