Lamont: The bigger vaccine risk is not to take it

As positivity rate drops to 2%, governor urges the reluctant to get vaccinated 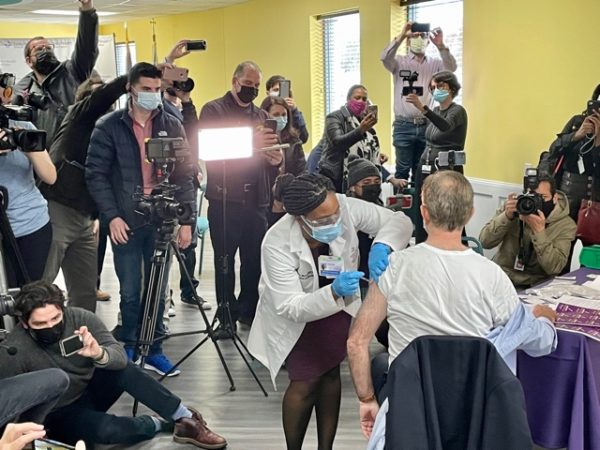 Halting the use of the Johnson & Johnson vaccine means Connecticut will see its weekly allotment of doses shrink from 288,000 to 179,000, but the state still has available appointments for inoculations against COVID-19, Gov. Ned Lamont said Thursday.

Health care providers across the United States paused using the vaccine Tuesday on the advice of federal health officials over a possible link to extremely rare cerebral blood clots seen in six of the nearly 7 million people who received the Johnson & Johnson product.

The COVID vaccines produced by Pfizer and Moderna, which require two shots three or four weeks apart, have been redirected to the mobile clinics that are a vital element of outreach in underserved communities.

“The pause has had little impact on our Connecticut mobile vaccination efforts. That’s good news so far. But there is pretty good supply out there,” Lamont said.

For logistical reasons, the Johnson & Johnson vaccine had been planned for the mobile clinics, which serve a walk-up clientele and people with appointments. The vaccine requires only one shot, needing no follow-up visit.

While the mobile vaccinations are going forward, the loss of more than one-third of the vaccine supply is being felt, said Josh Geballe, the state’s chief operating officer.

“If we had the Johnson & Johnson this week and we had more supply, we could vaccinate more people this week. I mean, there’s people who have appointments right now for next week, for the week after, that could have been brought forward,” Geballe said.

J&J doses that were to be administered from a Federal Emergency Management Agency trailer deployed to Connecticut for 60 days were quickly replaced with Pfizer and Moderna doses, Geballe said. A second trailer will arrive in a few weeks and trace the route of the first trailer with follow-up doses, he said.

Unclear is the extent to which the news of a potential side effect from one of the three vaccines approved for use in the United States will increase hesitancy in getting inoculated as the vaccine supply was coming closer to meeting demand in Connecticut.

Speaking at the second of his twice-a-week COVID briefings, Lamont said there was a far greater risk in being unvaccinated. He released a chart showing what he described as a correlation between a higher rate of COVID cases in communities with low rates of vaccinations.

He also showed a Hartford Courant headline noting the hospitalizations and deaths were coming from the ranks of the unvaccinated. 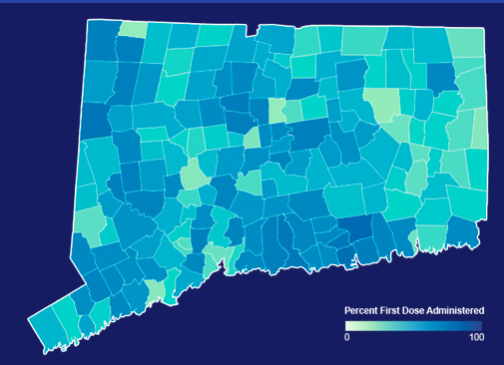 This shows vaccination rates by community. The darker the color, the higher rate of vaccinations. Lyme was first with 75% of all residents.

The state’s COVID-positive test rate on Thursday was 2.04%, the lowest in weeks. Hospitalizations decreased by 13, to 505, and six more deaths were recorded, bringing the total since the pandemic broke out in Connecticut to 7,990.

“I’m proud to say that my age group, 65 and above, is breaking all records with 87% have now been vaccinated,” Lamont said.

Even with the temporary loss of the Johnson & Johnson vaccine, the state expects that everyone who now wants a vaccination will be able to get one before summer. The challenge then will be coaxing the hesitant to get a shot.

Polling has found disparate pockets of reluctance, ranging from urban minorities to white conservatives, especially among the young. The state will continue relying on trusted community voices to urge vaccinations, as well as incentives.

“My instinct is there’ll be some incentives out there and … could possibly be that you’re going to have stores and restaurants [that] say, ‘We feel more comfortable only having vaccinated people coming in there.’ That would be one more incentive for more people to get vaccinated,” he said.

“I’d like to think it’s going to sort itself out with incentives and on a voluntary basis — and you telling your friends, ‘It’s time for you to get vaccinated.’”