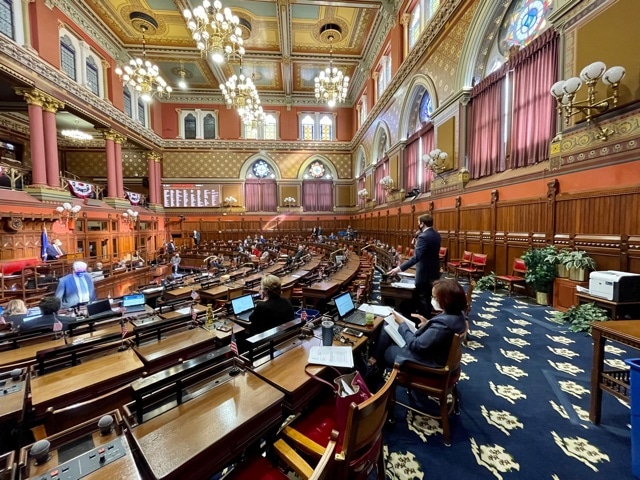 Rep. Sean Scanlon addressing a chamber largely empty due to the pandemic in February.

At the same time, though, many of Lamont’s fellow Democrats noted that COVID-19 has battered households as well, and — given the state’s long-term fiscal challenges — it might not be possible to provide relief for some without taxing others more.

But as the legislature’s tax-writing panel wraps its work this week, a wide range of proposals still hang in the balance.

The Finance, Revenue and Bonding Committee must by Thursday decide the fate of proposed tax hikes on digital media ads and health insurance carriers, along with a statewide property tax aimed at high-value homes.

Mixed in with that are several income tax-related bills that provide relief for the poor or increase burdens on the wealthy.

“We’ve just experienced a difficult and historic year, and it was sort of our challenge in the finance committee to meet the moment,” said Rep. Sean Scanlon, D-Guilford. And while the House chair of the panel declined to speculate — with a few exceptions —  on which measures would survive, he predicted the final product would both “address inequalities” and “recognize it’s a fragile economy.”

Despite the havoc COVID-19 has wreaked on business and household budgets, state government, relatively speaking, has fared far better, thanks partly to a robust stock market that has fueled state income- and business-tax receipts.

Lamont’s budget office warned back in February that state finances, unless adjusted, were on pace to run $2.6 billion in the red over the next two fiscal years combined, which could largely exhaust its $3 billion rainy day fund.

But since then, state officials learned Connecticut is getting $2.6 billion in federal stimulus to help with the next two-year budget, and analysts project the state budget will close on June 30 with an extra $800 million left over.

In other words, the projected deficit — while significant — looks eminently manageable.

Two bills Scanlon expects the committee to adopt would deliver hundreds of millions of dollars in state income tax relief to low- and middle-income households.

One involves creating a new child tax credit. The second would expand the state Earned Income Tax Credit. Aimed at the working poor, the state EITC is currently set at 23% of the federal income tax credit of the same name and delivers $101 million annually to Connecticut’s poorest workers. Scanlon didn’t say how much it might be increased, but one proposal before the panel would boost it by more than one-third, to 30% of the federal credit.

But the finance committee’s other chairman, Sen. John Fonfara, D-Hartford, wants to take the tax fairness debate much farther.

He also proposed a new “consumption” tax that — despite its name — is tied directly to income, and not to purchases. The basic concept is that households with higher earnings can purchase more and therefore should pay a higher sales tax.

But while Connecticut does apply special luxury sales tax rates in a few areas, such as expensive jewelry and cars, the state charges the same 6.35% to rich, poor and middle-income alike on the overwhelming bulk of goods and services.

Fonfara told the CT Mirror last week that the state sales tax and the municipal property tax are the linchpins in a combined revenue system that asks too much from those least able to pay. Legislators must begin to chip away, he added, at “this gross inequity, this incredibly regressive burden [placed] on the least able in our communities.”

Fonfara’s proposal, which is one of several bills going before the finance committee at a 9 a.m. live-streamed hearing on Tuesday, would establish six tax rates, ranging from 0.1% to 1.5%, to be applied to individuals making at least $140,000 per year.

Both proposals are likely to draw opposition from Lamont, who consistently has opposed increasing state taxes on the wealthy to finance relief for the poor and middle class, arguing this would drive Connecticut’s biggest taxpayers to leave the state.

The Republican minorities in both the Senate and House likely also would oppose these and other tax hikes.

And Sen. Henri Martin of Bristol, ranking GOP senator on the finance committee, noted the list of proposed tax increases doesn’t stop at capital gains and the consumption levy.

Many House and Senate Democrats have voiced support for a proposed tax on digital ads, generating hundreds of millions of dollars annually from online giants such as Google and Facebook.

Also still in play before the committee is a proposal from Senate President Pro Tem Martin M. Looney, D-New Haven, for a statewide tax of 1 mill aimed at homes with market values of more than $430,000.

Looney has said the tax hike could finance a Democratic legislative pledge to bolster non-education grants to cities and towns by $135 million per year.

But Martin said it’s not that simple.

“I don’t believe that they [Democrats] are being sensitive at all” to the economic damage caused by COVID-19, Martin said. “I think the reality hasn’t sunken in. … People are getting out of their house and starting to go back into the community.”

The Connecticut Retail Merchants Association teed off Monday on the digital media ads tax, predicting it would stymie any effort to get the state’s economy moving.

Tim Phelan, president of the association, said that while is well-intended, “the timing on this couldn’t be any worse.”

Stephanie Do with the Council on State Taxation said Connecticut would become a national outlier.

Only one state, Maryland, has a similar tax, and that measure, enacted this year, is being challenged in state and federal courts, said Do, senior tax counsel with the Washington, D.C.-based taxpayer advocacy and policy group.

“It sends a very strong signal, or a very negative signal,” added Phelan, who predicted advertisers would pass the costs on to already struggling businesses, some of whom would channel those expenses onto consumers.

Besides Tuesday’s hearing, the finance committee also has scheduled meetings for Wednesday and Thursday to finish action on proposed bills.