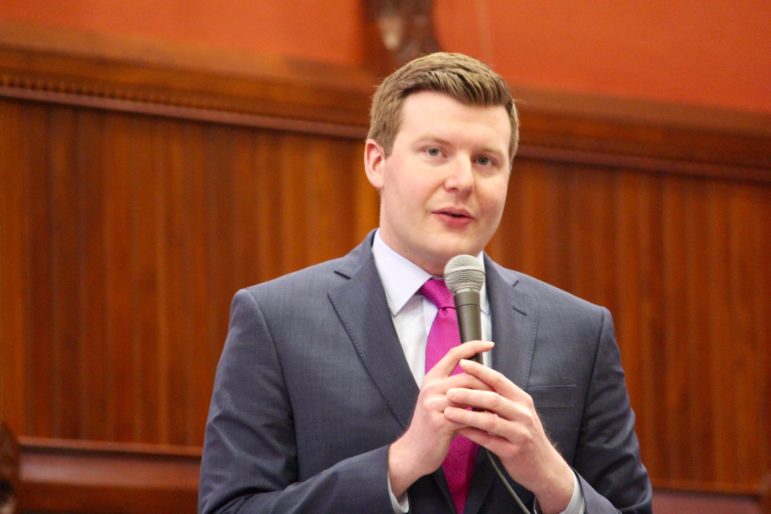 {Updated at 5 p.m. with comments from Gov. Ned Lamont.}

The legislature’s Finance, Revenue and Bonding Committee approved state income tax cuts Thursday for the poor and middle class and a one-time bailout for restaurants, largely funding them with two tax surcharges on the wealthy and a new levy on digital media ads.

The Democrat-controlled panel also endorsed a revenue package that includes a new highway use tax on large, commercial trucks and new state and municipal sales taxes on recreational marijuana.

But the package, which represents an overall state tax increase of approximately $600 million per year, also would shift more than $1 billion in revenues outside of the spending cap and tap more than $2 billion from one-time sources — moves Republicans said lack fiscal transparency and responsibility.

Gov. Ned Lamont, who is more fiscally conservative than many of his fellow Democrats in the legislature, wasted little time Thursday in saying he would not support the package.

The revenue plan, adopted largely along party lines, now will be coupled with the spending proposal for the next two fiscal years that was adopted Wednesday by the Appropriations Committee. Together they form the foundation for final negotiations on a new state budget between legislative leaders and Lamont. The two sides hope to reach a deal before the regular legislative session ends on June 9.

[Legislature presents its own budget plan, and the stage is set for debate]

“Our challenge in the wake of a devastating health and economic crisis was to put together a budget that met the moment and helped Connecticut businesses and families recover,” said Rep. Sean Scanlon, D-Guilford, House chairman of the finance committee. “With this proposal, I believe we’ve done that. … We are putting more money in the pockets of those who need it most right now and making investments in policies that will help grow our state.”

A major income tax break for the poor and middle class

The Guilford lawmaker noted the package includes one of the largest tax breaks in state history for working class families, built in part on his proposal for a new state income tax credit for families with children. This will provide about $150 million in relief next fiscal year and $300 million in 2022-23, according to the nonpartisan Office of Fiscal Analysis.

Along with that, the committee plan would raise the income tax credit for working poor families from 23% to 40% of the federal Earned Income Tax Credit, granting those households about $77 million more per year.

Connecticut’s restaurant industry was among those hardest hit by the pandemic, and the panel endorsed a one-time bailout for these businesses worth nearly $50 million.

The state imposed a 1% sales tax surcharge on restaurant meals back in 2019. The measure debated Thursday would allow restaurants to keep the revenues from that surcharge — but just for the next year.

Democratic legislators, who control both the House and Senate, have conceded since the session began in January that tax relief for some groups would not happen without imposing tax hikes on others.

That’s because analysts project state finances, unless adjusted, would run more than $2.5 billion in deficit over the next two fiscal years combined.

The finance committee plan would draw $235 million from the state’s rainy day fund, about $117.5 million per year, to help balance the next budget.

It also would direct $1.9 billion of the $2.6 billion in direct federal aid received through the latest pandemic relief measure — an average of $942 million per year — to close the deficit in the next budget. Lamont is expected to recommend a plan Friday to use the remainder of the federal funds to expand various human service, education, and economic development programs.

To finish balancing the budget and to pay for tax relief, though, the committee approved several new tax hikes. Two of them, aimed at wealthy households, would generate a combined $760 million per year.

One involves a 2% surcharge on the capital gains earnings of singles with incomes above $500,000 per year, and on couples earning more than $1 million.

A second levy aimed at the wealthy technically was labeled a consumption tax, but actually operates as another income tax surcharge. The basic concept is that households with higher earnings can purchase more and therefore should pay a higher sales tax.

The consumption tax, proposed by Sen. John Fonfara, D-Hartford, the committee’s other co-chair, originally had been aimed at households earning more than $140,000 per year, but the final version approved Wednesday only applies to individuals making at least $500,000 per year with tax rates ranges from 0.7% to 1.5%. For example, a person earning $500,000 annually would be taxed at 0.7%, and pay $3,500.

Lamont has argued that frequently increasng state taxes on the rich would drive them away from Connecticut, a point echoed by several Republicans at Thursday’s committee meeting.

When asked about the committee’s proposals during a 4 p.m. briefing on the coronavirus infection and vaccination issues Lamont didn’t mince words.

“No, it’s not something that I would sign,” the governor said. “For the first time in many years, Connecticut’s got really good momentum, and that’s in terms of GDP [Gross Domestic Product] and employment and new businesses and people moving to the state of Connecticut. I think part of that is people have recognized we’re beginning to get our fiscal house in order.”

The governor added that moving funds outside of the spending cap “are sort of the same games that got us into trouble over the last 30 years. And respond to that by just more taxes, that’s not the way I think we should be going as a state.”

But Scanlon noted that while some segments of the economy were clobbered during the pandemic, the stock market — overall — has boomed, and the wealthy generally have done very well.

The committee also endorsed a new tax on digital ads that’s expected to generate between $150 million and $162 million per year from online giants such as Google and Facebook.

But while Republicans balked at the tax hikes, warning they would stifle economic growth statewide at the worst possible time, many objected even more strongly to how the revenue would be used.

The package includes a proposal from Fonfara that would dedicate money from several sources, including the state Earned Income Tax Credit, the digital ads tax, and the consumption levy to a new “Connecticut Equitable Investment Fund” that would be dedicated to Connecticut’s distressed municipalities.

But Republicans noted that close to $1 billion would be removed from the limitations of the state budget’s spending cap, and would largely be overseen by a nine-member council comprised chiefly of state officials.

“It is such an incredible disappointment I can hardly describe,” said Rep. Laura Devlin, R-Fairfield, who said the lack of transparency and oversight over huge amounts of public tax dollars is potentially a major retreat from fiscal reforms both parties adopted just four years ago. “It is this out of control spending that had our state going down a really horrible path.”

“It is not respectful to the citizens of our state,” added Rep. Terrie Wood, R-Darien. “It leaves me speechless to be honest.”

But Fonfara has argued on several occasions that Connecticut, for too many years, has ignored “this gross inequity, this incredibly regressive burden [placed] on the least able in our communities.”

Other elements of the revenue package adopted Thursday include:

In other business Thursday the finance committee also approved:

— A separate measure taxing the sale of marijuana for recreational use that would establish a 20% state sales tax, and a 3% municipal sales tax.

— A bipartisan plan to preserve Connecticut’s debt-riddled unemployment trust fund that would curb benefits for workers and asking more from the business community as a whole. But the deal, which has been endorsed by both major business and labor coalitions, actually would reduce unemployment taxes starting in 2024 on about three-quarters of all businesses. Those that lay off high numbers of workers, though, would pay more.

Connecticut has borrowed roughly $700 million from the federal government since the pandemic began to cover unemployment benefit costs and the projections hold that debt may exceed $1 billion before the majority of its population has been vaccinated.

— A new two-year bond package. The committee endorsed $1.87 billion in General Obligation [G.O.] bonds for the 2021-22 fiscal year and $1.74 billion for 2022-23. G.O. bonds, which are repaid with revenues from the budget’s General Fund, are the principal tool used to finance municipal school construction work, economic development initiatives, capital projects at public universities and colleges, and renovations to state buildings. The package also includes $837 million in transportation bonding and $281 million in financing for clean water projects in the first year of the new biennium and $930 million and $237 million, respectively, in the second.