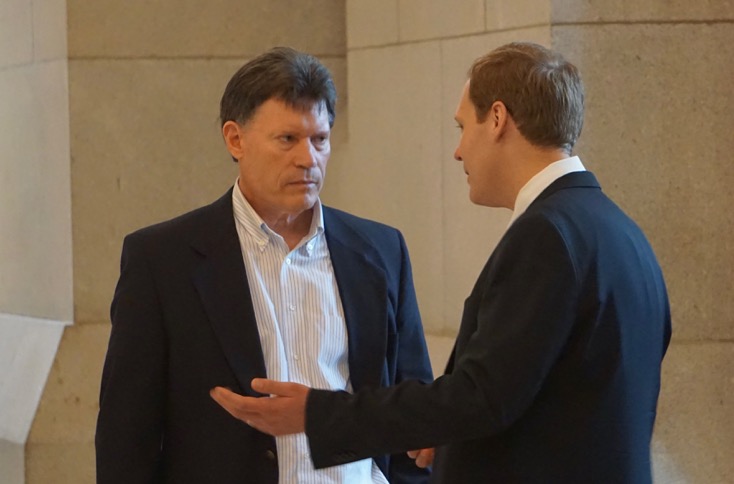 Majority House Democrats will unveil a compromise next week to enable greater investments in poor cities — while avoiding the transparency issues and hefty tax hikes that have bogged down a competing Senate Democratic plan.

“I think we’re all very sympathetic” to the poverty concentrated in the state’s urban centers, said House Speaker Matt Ritter, D-Hartford, whose community faces one of the heaviest burdens in Connecticut.

The speaker and other House Democratic leaders are trying to find middle ground between Gov. Ned Lamont and other fiscally moderate-to-conservative Democrats and the more liberal wing of the party.

Progressives, led by Sen. John Fonfara, D-Hartford, and Senate President Pro Tem Martin M. Looney, D-New Haven, have championed a plan to raise hundreds of millions in new taxes on the wealthy and big corporations, funnel some of that directly back to the poor as an income tax cut, and reserve the rest to invest in under-served communities.

And the billions of new federal pandemic relief funds headed to Connecticut, “as substantial as they are, are not sufficient nor sustained to address the systemic challenges we face as a state,” he added.

But Fonfara’s Equitable Investment Fund, though approved by the Finance, Revenue and Bonding Committee that he co-chairs, has drawn plenty of heat.

Lamont and minority Republicans in the House and Senate object to many of the tax hikes it contains, including two income tax surcharges on households earning more than $500,000 per year and a new levy on digital media ad giants like Facebook and Google.

The governor, a Greenwich business executive, has said repeatedly that he opposes raising state taxes on the rich to fund tax breaks or other programs for low- and middle-income households because it would prompt wealthy taxpayers to flee the state.

“Connecticut is turning the corner in regards to our state’s finances and attractiveness to both businesses and individuals,” said Melissa McCaw, Lamont’s budget director, as she testified against Fonfara’s plan. “The tax proposal contained in this bill would send the wrong signal that our state is unable to build on the progress we have made together.”

Critics also charge the plan would violate the spirit — and potentially the letter — of the state Constitution and the statutory spending cap.

The Equitable Investment Fund would receive revenues not only from the income tax surcharges and digital ads tax but also from smaller proposals, including any new levy on marijuana and fees on sports betting.

All together, the fund would receive more than $1 billion per year by 2023, according to nonpartisan analysts. And even after sending more than $180 million to poor households through income tax refunds via the state’s Earned Income Tax Credit, there would be more than $860 million left over.

Fonfara’s plan calls for a nine-member panel — six appointees of legislative leaders and three representatives of the governor — to decide how Connecticut would spend  the $860 million, nearly 1/20th of the entire General Fund.

“It raises a lot of questions,” Candelora said, adding “it’s the classic taxation without representation.” The House GOP leader also said that were the potential spending incorporated into the budget, it would shatter the statutory spending cap by hundreds of millions of dollars annually.

The nonpartisan Legislative Commissioners’ Office, which drafts bills and provides legal counsel to the General Assembly, warned in a May 11 memo that the plan raises “a possible constitutional problem,” namely a conflict with the legislature’s fundamental charge to draft the state’s budget.

“The General Assembly has no role in overseeing such programs or strategies or any disbursements made from the fund,” the LCO wrote.

Ritter said Wednesday that “Senator Fonfara and I are completely on the same page” about easing urban poverty, but what’s needed is a “middle road alternative” when it comes to generating resources and oversight of spending.

The speaker said his compromise would be part of the normal state budgeting process and would comply with capping rules.

Though Ritter didn’t provide specifics, one solution that legislatures and governors have employed frequently in past years to stay under the cap — and to limit the need for tax hikes — was to borrow for long-term programs by issuing bonds. Debt service within the state budget has long been exempt from the spending cap.

Improving education, health care and economic opportunity in Connecticut’s cities, Ritter said, is a major task that likely will require more than a decade of enhanced investments.

And while putting the federal pandemic relief to use is a good place to start, he added, those investments “just can’t disappear when the federal money goes away.”