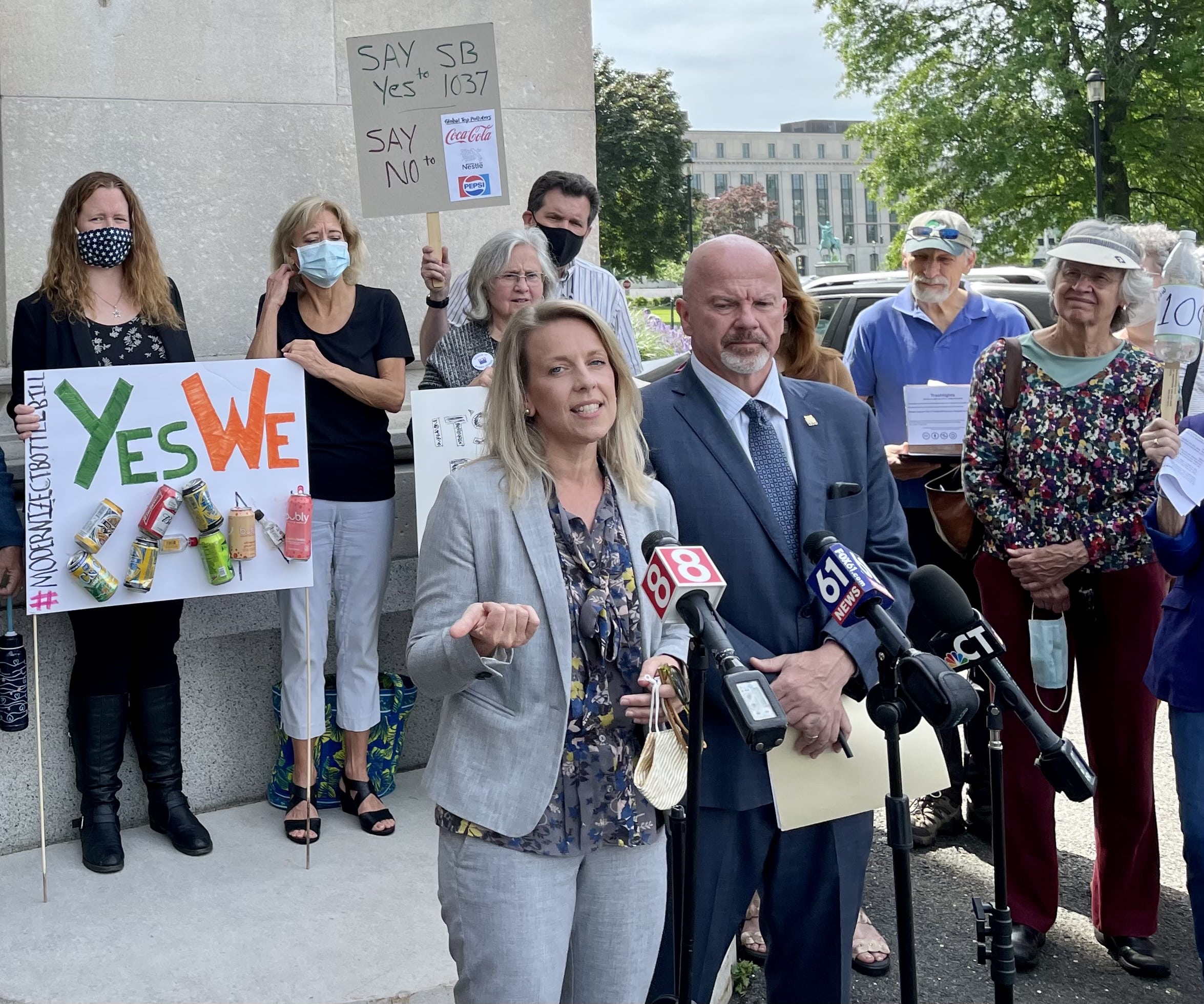 Sen. Christine Cohen and Rep. Joe Gresko, co-chairs of the Environment Committee, with supporters of the bottle bill.

The Senate voted 33-1 Wednesday night to overhaul Connecticut’s 43-year-old bottle bill law by eventually doubling from a nickel to a dime the deposits on returnable bottles and cans and expanding its reach to juices, teas, sports drinks and some other currently exempt beverages.

Nips, those tiny liquor bottles that have become an outsized source or urban litter, would remain non-returnable, but subject to a 5-cent surcharge suggested by the wine and spirits industry to produce revenue for the communities where they are sold.

The bottle bill revisions now go to the House. The sole dissenting vote in the Senate was cast by Sen. Rob Sampson, R-Wolcott.

“They’ve been getting the same handling fee since 1982,” Cohen said. “So we only have eight fully operational redemption centers operating as intended. And that’s because they’re just simply not moneymakers anymore, making it very inconvenient for consumers to redeem those nickels.”

By pushing off implementation of the expansion and higher deposits, the bill also provides time for recyclers and the beverage industry to respond to an invitation to counter with better ways to reduce solid waste and increase recycling.

The bill creates a framework for the creation of non-profit “stewardship” programs, modeled after efforts in Oregon, Canada and Europe to both reduce non-recyclable packaging and make recycling more efficient and less expensive to municipalities.

“Don’t tell us that you can’t, because they do it in British Columbia. They do it in Europe. They do it everywhere else. They just never wanted to do it here because it’s going to cost them money,” said Rep. Joe Gresko, D-Bridgeport, the other Environment committee co-chair.

The compromise was applauded widely, but not unanimously. A trade association warned the bill ultimately could undermine recycling and increase waste-disposal costs to municipalities.

House Minority Leader Vincent J. Candelora, R-North Branford, initially called the deposit increase a revenue grab, but he softened his criticism after seeing the compromise would redirect an increasing share of unclaimed deposits to distributors, offsetting some of the cost of handling bottle and can returns.

Unredeemed deposits were kept by the bottlers and distributors from the program’s creation until the Great Recession of 2008. Desperate for revenue, the legislature made them state property, effective April 2009.

Unredeemed deposits, handling fees, which beverages should be exempt, and the responsibilities of retailers, distributors and redemption centers all have been subjects of lobbying battles.

“There are a lot of dollars involved here, a lot of competing interests,” said Sen. John Kissel, R-Enfield.

Conceived in the 1970s as an anti-litter program, today’s bottle bill law is one element of a complex and changing recycling environment currently depressed by a weak market for plastic and glass waste.

Meanwhile, the House gave final passage earlier Wednesday to a companion bill that requires the Department of Energy and Environmental Protection to recommend by Dec. 1, 2022 recycled content requirements for products sold in Connecticut.

Packaging with multiple materials complicates recycling, especially in single-stream programs that depend on the ability to efficiently sort and separate types of waste. Aluminum cans have high rates of reuse through recycling, while plastics do not.

Sen. Craig Miner, R-Litchfield, a co-sponsor of the compromise language, said he hoped the beverage and recycling industries respond with ways to increase recycling without an increase to a 10-cent deposit.

Sensing the growing animus toward litter attributed to nips, the Wine and Spirits Wholesalers of Connecticut proposed the surcharge as preferable to a deposit. Deposits on cans and bottles are redeemed using reverse vending machines, but the machines cannot handle nips.

“They’re too small, so that they have to be hand counted,” said Lawrence F. Cafero, the executive director the wholesalers group. “That’s point number one. Point number two, there is no technology that has been developed that separates the aluminum band that is part of the twist of cap from the actual bottle.”

As a result, Cafero said, the nips bottles cannot be effectively recycled and are sent to landfills, even in Maine — the only state that includes them in its bottle bill.

Cafero said 90 million nips are sold annually in Connecticut, and it is easy to track where they are sold. Research shows they often are discarded close to where they are purchased.

“It’s a culture of concealment, concealing from your parent, from your employer, from your spouse, from the law enforcement, whatever,” Cafero said. “So, it’s drink and chuck. And it’s in the municipality where it was purchased.”

In New Haven, the surcharge would produce about $200,000 a year, money that could be used creatively to encourage community cleanups, he said.

Glass liquor and wine bottles remain exempt, but Cohen said there is an effort to devise ways to more easily separate them from the waste stream for use by companies such as Urban Mining, which uses pulverized glass as an additive to make a stronger concrete.

Steve Changaris of the National Waste and Recycling Association said the bill could have unintended consequences. He sees the commodity market for waste plastic as rebounding, and making more plastic bottles redeemable will remove them from single-stream recycling.

That means a revenue loss.