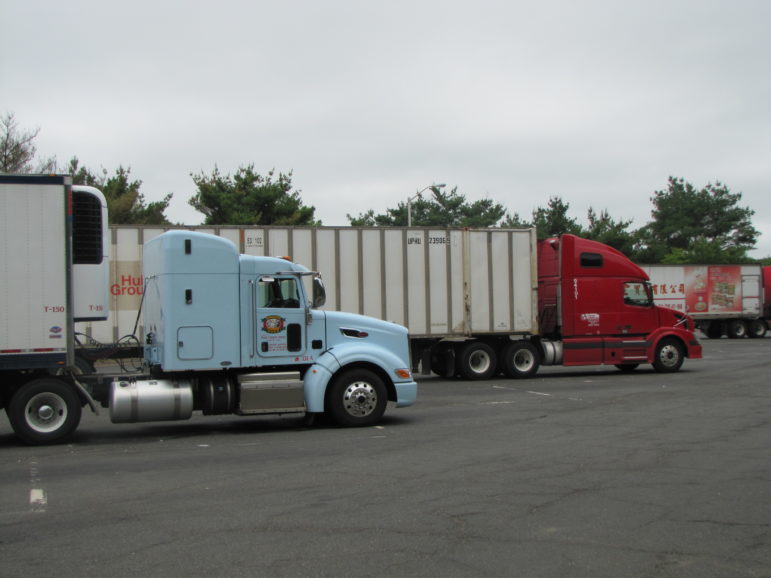 Trucks parked at the state rest stop on I-84 in Willington. (file photo)

Though Connecticut’s trucking industry faces a hefty new mileage tax starting in 2023, it will get some modest relief in the short term on fuel costs.

The state’s diesel fuel tax — which is adjusted annually on July 1 — fell Thursday to 40.1 cents per gallon, a drop of 4.5 cents and its lowest level in 11 years, according to data from the Department of Revenue Services.

“We’ll take it,” said Joe Sculley, president of the Motor Transport Association of Connecticut, which represents more than 800 trucking and trucking-related businesses. “But we’ve still got this weight distance tax coming up.”

Sculley was referring to a proposal from Gov. Ned Lamont that the legislature enacted last month, establishing a series of fees starting in January 2023 on large, commercial trucks.

Lamont, who was unable to convince lawmakers to support tolls in both 2019 and 2020, has — like his predecessor, Dannel P. Malloy — warned repeatedly that the state’s transportation program is at risk of fiscal insolvency by the mid-2020s absent additional resources.

The fees that begin 18 months from now range from 2.5 cents per mile for vehicles weighing 26,000 to 28,000 pounds to 17.5 cents per mile for trucks weighing more than 80,000 pounds. They apply to travel on all roads, not just on limited-access highways, in the state. Collectively they’re expected to raise $90 million annually, largely from the trucking industry.

By comparison, the diesel fuel relief is relatively small.

The diesel fuel tax generated about $122 million in the 2019-20 fiscal year when the rate was 46.5 cents per gallon, according to the revenue services department. Final data isn’t available yet for the 2020-21 budget year, which ended Wednesday.

But the new charge of 40.1 cents per gallon is down almost 14% from the rate two fiscal years ago. If fuel sales in the coming year are relatively similar to those of 2019-20, that would translate into about $17 million in savings for diesel fuel consumers.

But Sculley noted the diesel fuel rate is far from stable.

In 2008, the General Assembly fixed a complicated formula in the law that sets the diesel rate each July based on an analysis of wholesale prices in both diesel fuel and gasoline during the prior 12 months. As those prices rise and fall, so does the diesel tax.

Sculley also said the trucking industry still is dealing with the challenges posed over the last 15 months of the coronavirus pandemic.

Already facing a shortage of drivers, many companies found themselves paying big overtime costs as they struggled to keep grocery and department stores supplied in 2020 and the first half of this calendar year.

“Our members go to work every day no matter what is thrown at them,” Sculley said.