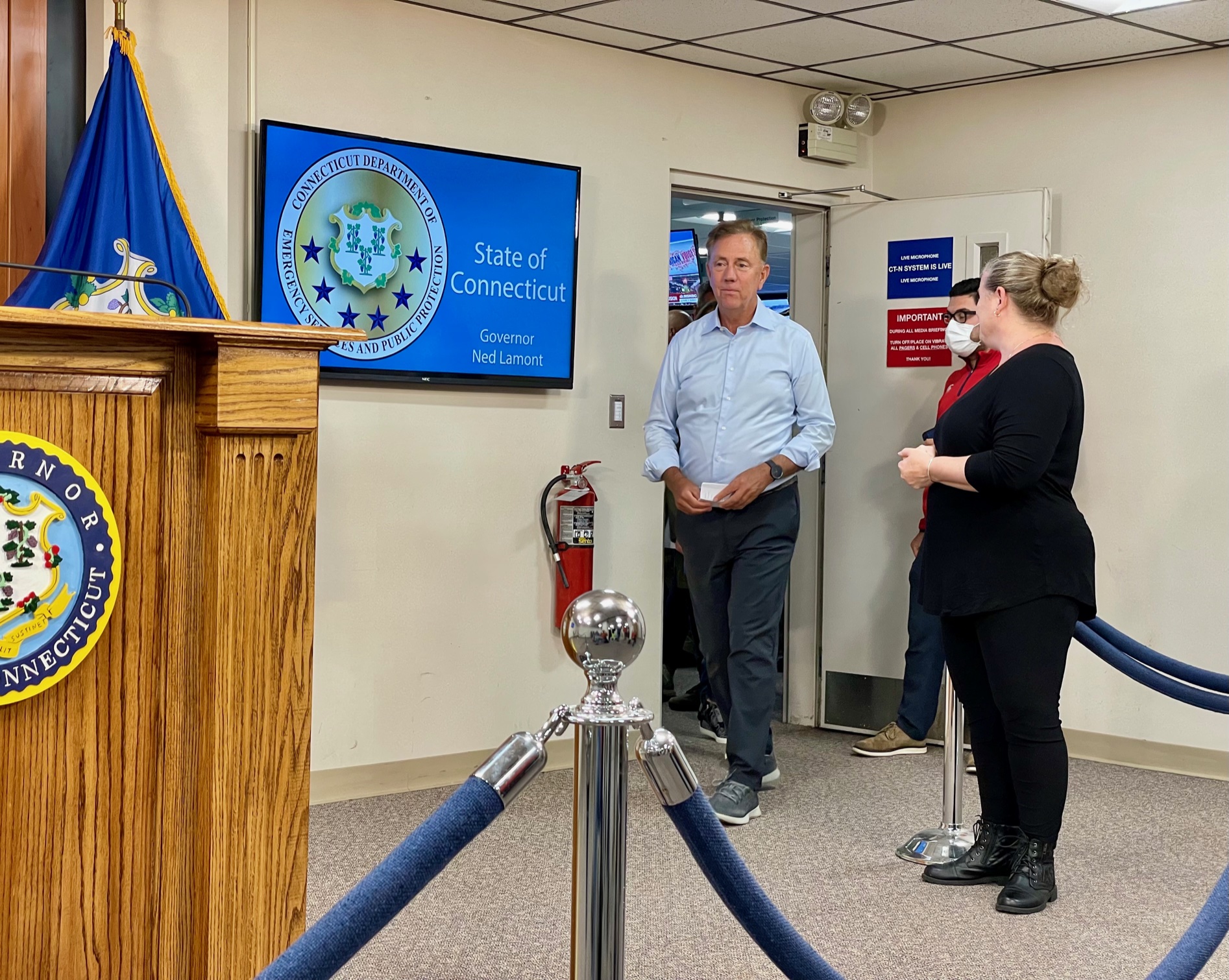 As Gov. Ned Lamont ended his Storm Henri briefing Sunday evening at the emergency operations center in Hartford, the new Eversource chief executive, Joe Nolan, went live with his own televised update at a staging area in Old Saybrook.

It was the third news conference in as many days for the Boston-based CEO in Connecticut, a state whose utilities regulators imposed a maximum $30 million penalty on Eversource for its response to Storm Isaias in August 2020.

Nolan acknowledged a “hearts-and-minds” campaign to rebuild the company’s standing with ratepayers and public officials, saying in a telephone interview Sunday night, “This has been my initiative since I took over.”

Henri offered Nolan an opportunity to contrast his approach with that of his predecessor, Jim Judge, who did not join Lamont in taking questions from reporters after a meeting about Isaias, widely seen as a gaffe in crisis management.

To be sure, Henri was no Isaias. After forecasts showed Henri making landfall as a hurricane in Connecticut on a track straight up the Connecticut River to Hartford, it veered east and made landfall as a tropical storm in Westerly, R.I.

Instead of hundreds of thousands of outages, Eversource faced about 28,000 as the governor addressed reporters at 6 p.m., a number that shrank to 20,000 less than three hours later. That is less than 2% of Eversource’s customers.

“The good news is that if we have 28,000 folks still without power, I have strong assurances from Joe Nolan and Eversource that the overwhelming majority, 90-plus percent, will have their power restored by this time tomorrow,” Lamont said.

(About 7,800 of Eversource’s 1.3 million customers in 149 Connecticut cities and towns were without power as the sun came up Monday. United Illuminating, which serves Bridgeport, New Haven and 15 other communities, reported that 67 of its 341,026 were out.)

In a required plan filed with the Public Utilities Regulatory Authority, Eversource outlined its preparations for a storm it assessed on a five-step “event level’ scale as a 2, the second-most damaging. A Level 2 assumes up to 48,000 damage spots, peak outages of 625,000 to 870,000 customers and a maximum restoration time of 21 days. 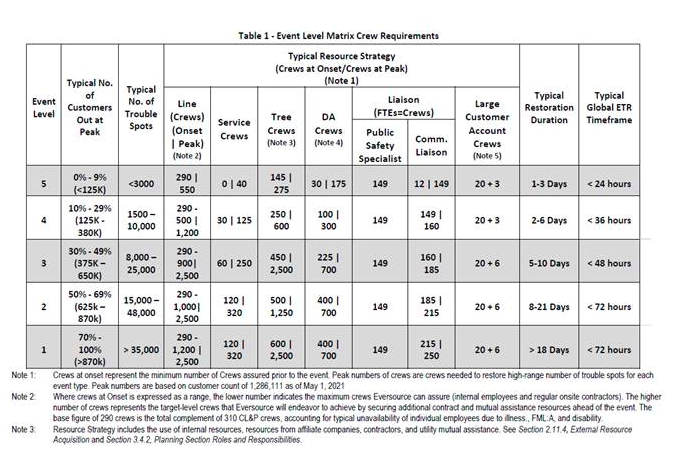 The sale Eversource uses to assess and prepare for storms and outages.

Lamont and Marissa P. Gillett, the chair of PURA, said a preliminary assessment of the state’s large utility is that it did well, even grading on the curve presented by Henri posing an easier test.

“It’s not like they get patted on the back for restoring within 24 hours what they thought could have been a 21-day event,” Gillett said. “We’re evaluating based on the actual number of outages. Now, that being said, we’re also not going to penalize them for preparing this way.”

If the company over-prepared based on the best-available forecasts, those costs will be borne by ratepayers. In Isaias, PURA concluded in April,  the company spent too little on laying in extra crews and ruled its shareholders should compensate ratepayers. The $30 million penalty included $28 million in credits to be returned to ratepayers.

Eversource is appealing that penalty in Superior Court.

“We literally told them in our April 28 decision, you should be preparing according to the forecast that you’re seeing 24, 48 hours in advance and leaning in,” Gillett said. “The storm doesn’t materialize, it doesn’t materialize. But I think in this case, they seem to have been acting on the best available information.”

Lamont, who cautioned that a fuller judgment could be rendered in 48 hours, said he was clear to Nolan that Connecticut would not tolerate a repeat of Isaias.

“I said, ‘Look, don’t over-promise and under deliver — do the opposite.’ But they scared us with that 21-day stuff. I know that’s a regulatory thing,” Lamont said of the Event Level scale. “It’s going to be closer to three days, starting from earlier today. So I think that’s incredibly positive.”

The General Assembly delivered its own message in October, passing bipartisan legislation that directs PURA to establish performance-based metrics to assess future rate increases. Lamont urged passage and signed the bill. PURA will weigh the quality of its preparation, including how many crews were put on standby.

“Your compensation is based upon how you deliver the goods. And some of that is tied to the severity of the storm. Some of that’s tied to the number of people you have on the ground,” Lamont said “But most of it’s tied to getting people’s power back up and operating.”

Officials said the fruits of the October legislation were evident over the weekend.

“The legislature and PURA put into place benchmarks and metrics for the utilities to follow. And they’re following them,” Lt. Gov. Susan Bysiewicz said at the governor’s briefing. “And that’s why we’re in this good place.”

“We have not heard any of the widespread communications problems that were reported last year. So I think that’s really a credit to the legislature and the governor for their leadership,” Gillett said.

The company objected to some of the criticism of its performance last year, and Nolan said COVID-19 precautions complicated its response. (Judge, who stepped down as CEO, remains as executive chairman.) But Judge last year acknowledged a major failure in communications and coordination, a problem Nolan said has been corrected with a new online portal and more liaisons Also, at least one bucket truck is positioned in every community with an outage.

“So when these communities identify what’s important, that’s what they take care of when we get out there and we jump on these things,” Nolan said. “In addition to that, I’ve called many communities. I’ve talked to many folks, have gotten very positive feedback on the community portal, on our response, on our representatives that are in the community.”

Lamont noted that the eastern turn of Henri was Connecticut’s luck and Rhode Island’s misfortune. On Sunday, Eversource sent 600 crews to Rhode Island.

Luck, of course, cuts both ways. In West Hartford, there were only 271 customers without power Sunday night, less than 1%.

One of them was the chair of the Public Utilities Regulatory Authority.