After Storm Henri, CT politicians went to a hard-hit town. The power was already back on. 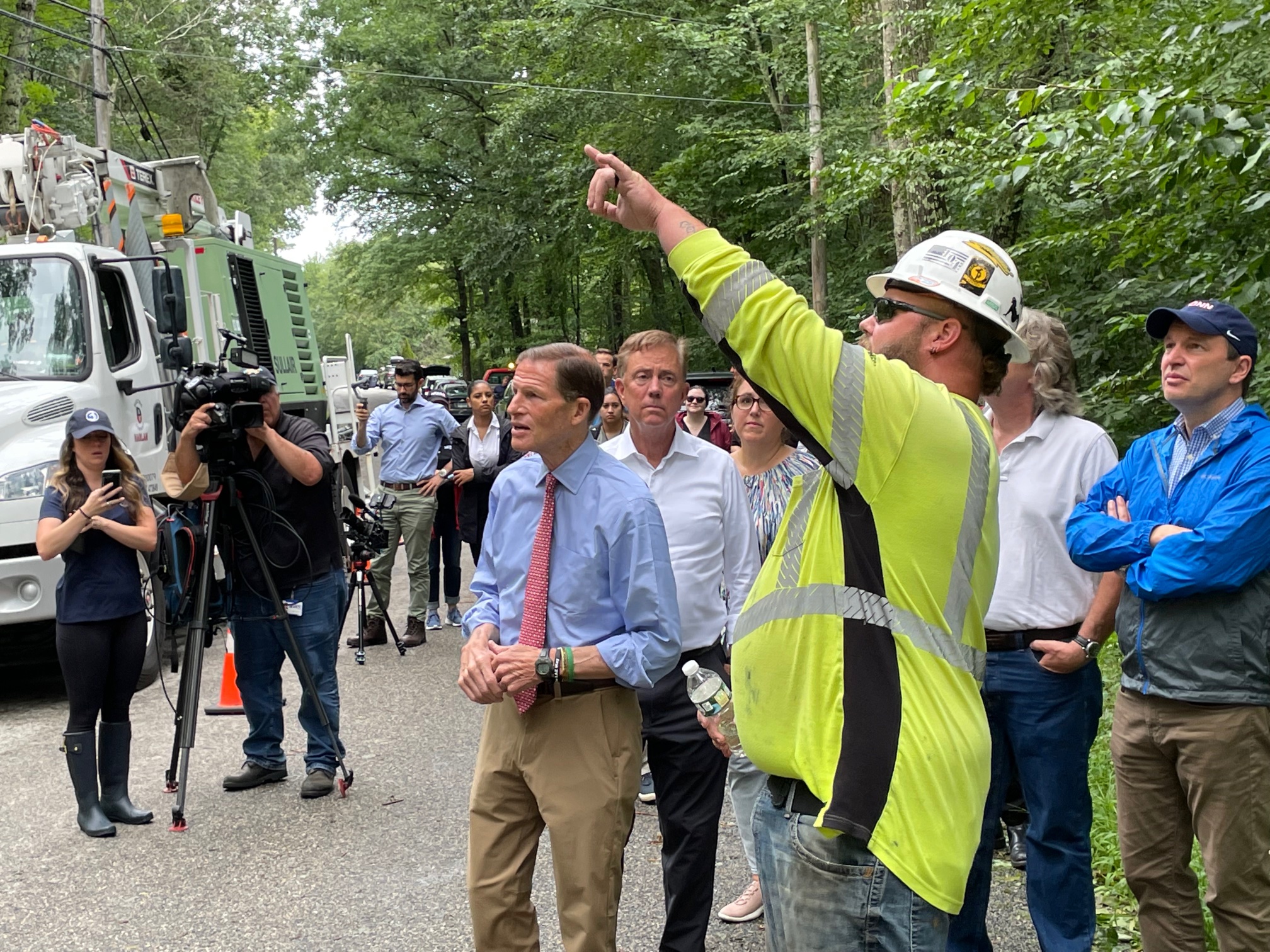 CANTERBURY — One sign of Storm Henri’s relatively light touch on Connecticut’s power grid is that most of the lights already had come back on in this hard-hit town by the time the governor, two U.S. senators and a press caravan arrived Monday.

They were welcomed by Chris Lippke, the genial stay-at-home dad who serves as the Republican first selectman of Canterbury, home to 5,100 people and 2,305 customers of Eversource, most of whom had lost power Sunday.

But 75% of the outages here already had been restored, and repairs were proceeding apace, potentially depriving Gov. Ned Lamont, U.S. Sens. Richard Blumenthal and Chris Murphy of a telegenic backdrop for their briefing.

“We’ve got to hurry up,” Lippke said.

Post-storm damage tours are standard for elected officials, and this state’s experience with protracted blackouts over the past decade can make recovery into political theater, pitting politicians against the utilities.

Aside from the storm’s eastern turn — which spared its grid from a statewide blackout — the best result for Eversource, the multi-state company that provides electricity to 149 of Connecticut’s 169 cities and towns, was that the politicians had to hustle to keep up with their crews.

They found them on Brooklyn Road, a tree-lined lane. Two crews of out-of-state linemen were bemused at the arrival of a long caravan of cars and SUVs, led by the DPW director in a red pickup and a black SUV carrying the governor. One man high in a bucket loader tightened a drooping power line.

In the middle of the street, a Blumenthal staffer set up a stand that accommodated the television microphones. Nearby, Erik Worthington, a burly lineman from New Boston, N.H., made sure that no one wandered past the orange cones marking the overhead work zone.

Worthington and the governor chatted while the press assembled. The vibe was light, mainly because Lamont had been assured that pretty much every customer would have power by nightfall — and 99.9% did by 5 p.m.

“Chris, thank you for welcoming us to beautiful Canterbury,” said Lamont, who wryly then acknowledged the impact of his visit. “All your streets are open, almost, except for this one — thanks to us.”

A state law passed in October, in response to Eversource’s performance responding to Storm Isaias a year ago, gives consumers a right to recover $250 for spoiled food after three days without power. Longer term, the law directors state regulators to use performance-based metrics in weighing rate requests.

But Lamont and the others acknowledged that Henri was a limited test of the utility’s readiness for a big storm.

“You have to recognize the magnitude of the storm was far, far less than predicted,” Blumenthal said. “We were all ready for another Superstorm Sandy.”

It threatened to arrive as the first hurricane to make landfall in New England in 30 years but weakened and shifted from Connecticut to Rhode Island.

Still, Lamont and the senators said Eversource clearly had geared up for a bigger storm, and its coordination with municipalities was much improved from a year ago. The company’s leadership also has been aggressive in explaining its preparations and repairs.

“I think the utilities have learned some lessons and were better prepared this storm than they have been in the past,” Murphy said.

Finished with a drooping power line, the out-of-state crews packed up. As the governor spoke, they drove away.