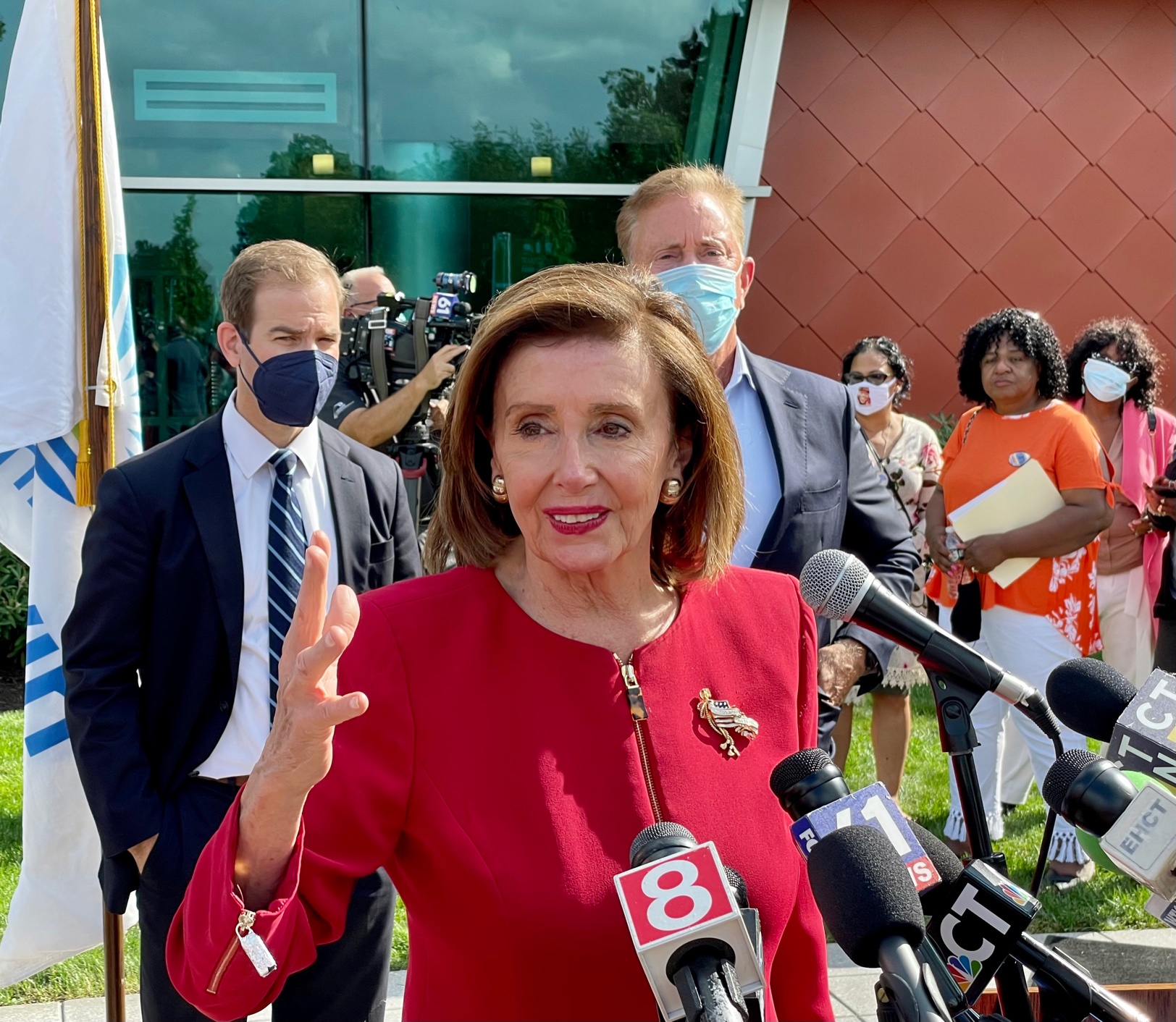 “I think any assumptions about politics are obsolete. We live in a whole new world of communication and the rest,” Pelosi said. “And I think that all of our members who survived Trump being on the ballot with them will survive next year.”

Pelosi held a brief press event at Goodwin University to promote the expansion of the child tax credit, a signal achievement of the Biden administration that Democrats hope will rally the base in an off-year election.

Her visit coincided with a speaking engagement Wednesday night at Smith College in Northampton, Mass. She credited her host, U.S. Rep. John B. Larson, D-1st District, for ensuring that mayors would be direct recipients of some pandemic relief, a boon to Democratic mayors in red states.

“You have no problem, your governor shares your values,” Pelosi told Hartford Mayor Luke Bronin, who stood with Gov. Ned Lamont.

The event had the vibe of a campaign rally, as each speaker reached for superlatives in describing the others. Larson’s introduction of Pelosi was especially fulsome.

“She will go down in history as one of the most consequential speakers in United States history, rivaling Henry Clay, Sam Rayburn, Tip O’Neill,” said Larson, who continued his praise even as Pelosi stepped forward, ready to speak. When Larson yielded, Pelosi said, “I think that introduction may be longer than my remarks.”

Pelosi’s hold on the House is tenuous going into the mid-term election. Democrats hold a 220-212 advantage over Republicans. There are three vacancies.

The president’s party has lost House seats in all but three of the 22 mid-term elections since 1934.

Pelosi, 81, the leader of the House Democratic caucus since 2003, knows well the history. Her own fortunes have risen and fallen in the mid-terms, when the president is not on the ballot.

In 2006, Democrats picked up 30 seats, including two in Connecticut, enough for Pelosi to become the first female speaker. The dominant issue that year was President George W. Bush’s management of the war in Iraq.

Pelosi shook off any suggestion her party feels urgency in packing the coming budget reconciliation bill with items that might be beyond reach after the 2022 elections.

On the House calendar is the bipartisan infrastructure bill passed by the Senate. House Democrats plan to use the budget reconciliation process to address issues not covered by the Senate.

“We all support the bill that came out of the Senate. It’s a fine piece of bipartisanship. But it doesn’t have everything,” Pelosi said. “It has practically nothing in terms of climate. And so we will address that in our bill.”

Lamont and U.S. Sen. Richard Blumenthal, who each are well-positioned in the polls for re-election, will top the ballot in Connecticut next year. 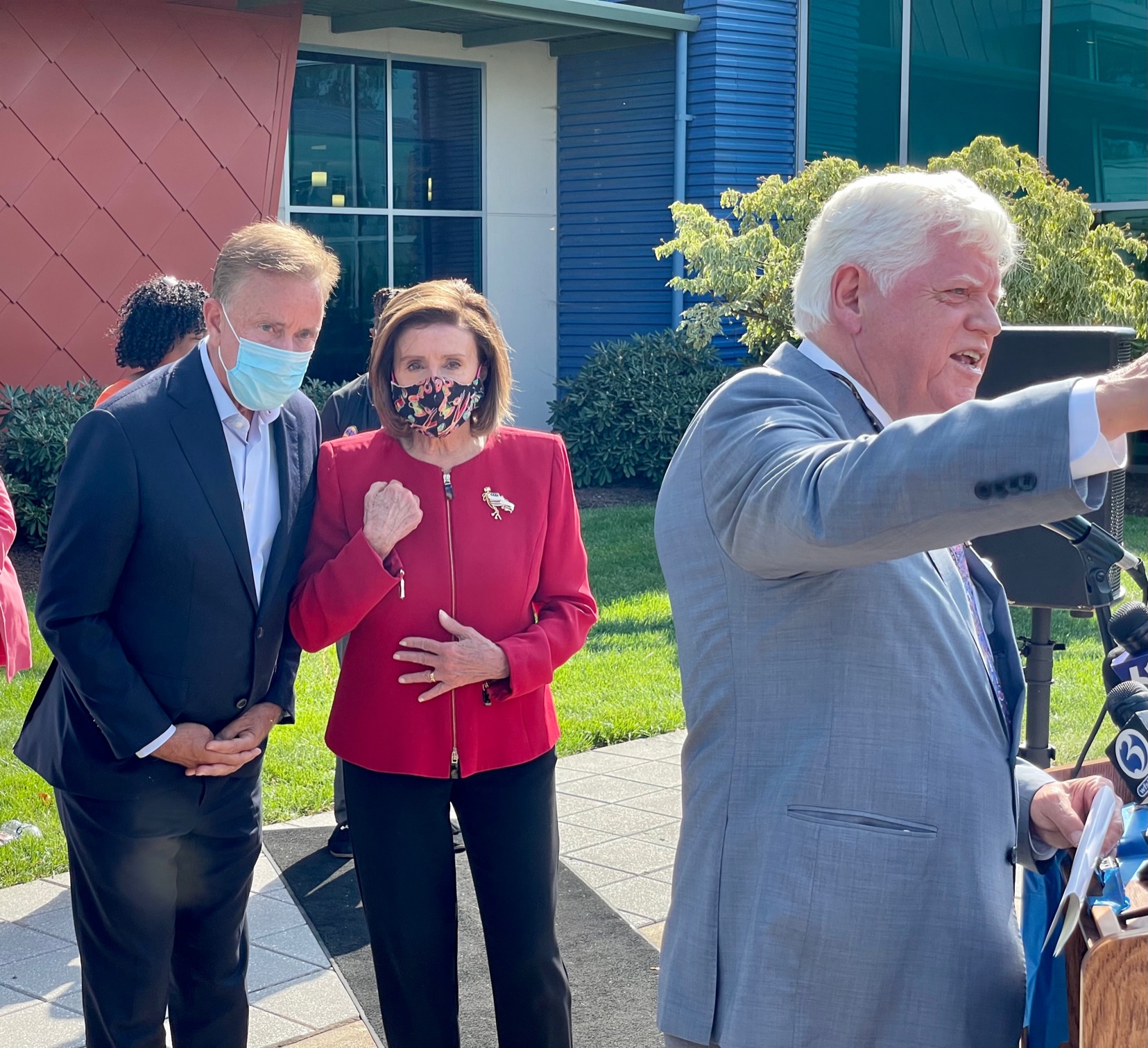 The first-term governor, who has resisted efforts to make the state’s tax code more progressive, has been happy to embrace the expansion of the federal child tax credit, which is projected to reduce child poverty by 45%.

Lamont also backed the expansion of Connecticut’s earned income tax credit and a higher minimum wage as the state’s contributions to closing the income gap. The minimum wage increased by a dollar to $13 last month, and it goes to $14 next year and $15 in 2023.

Pelosi, the mother of five and grandmother of nine, said attacking childhood poverty was her motive to run for Congress and it informs her attitudes toward what should be in the next federal budget.

Correction: As the originally posted, this story misidentified the location of Smith College.