COVID rampant in Stamford, a harbinger of things to come 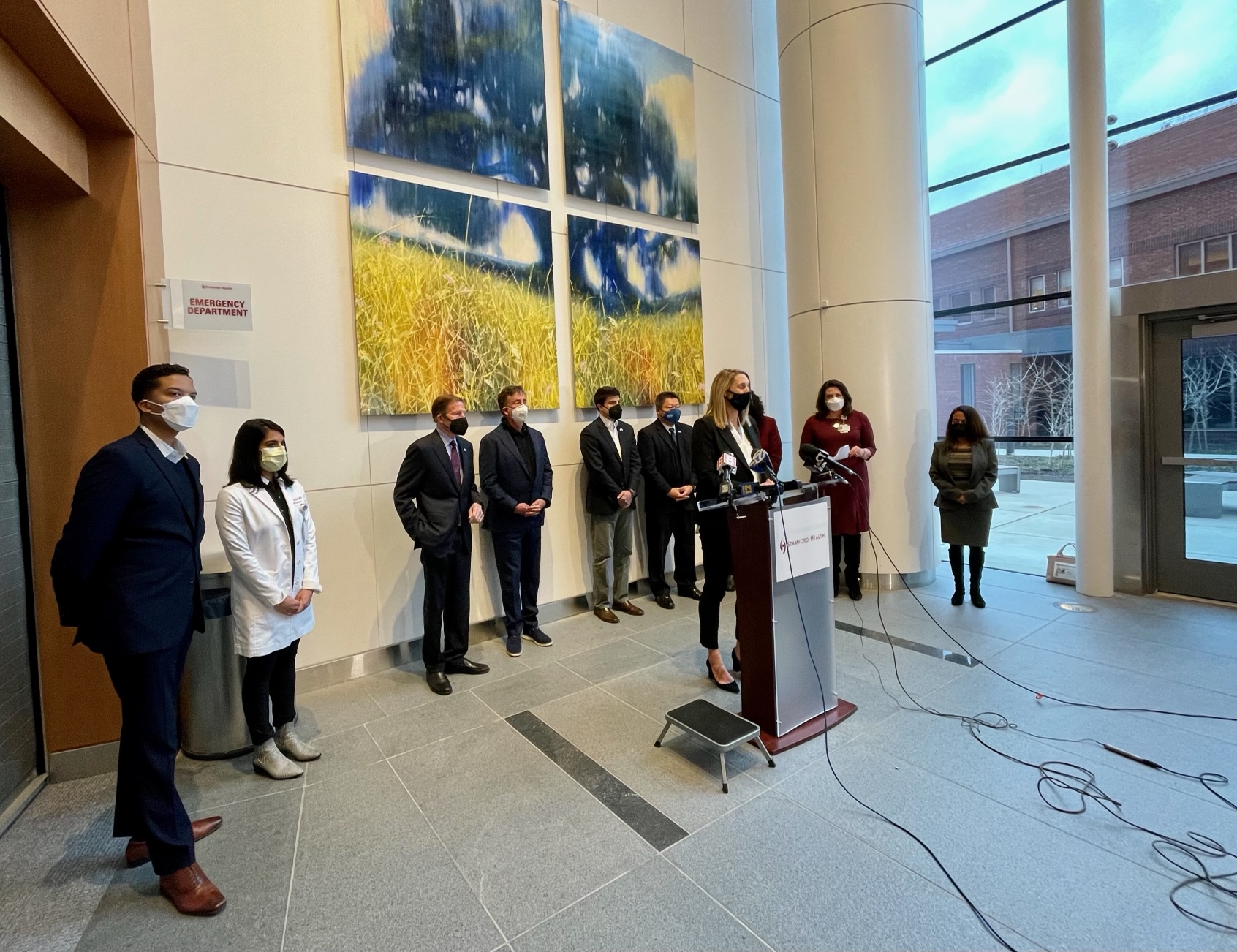 Stamford Mayor Caroline Simmons talks about the COVID outbreak in Stamford. She spoke at the Stamford Health hospital complex with Gov. Ned Lamont, U.S. Sen. Richard Blumenthal and others.

Forty percent of the 4,200 tests administered at the Stamford Health hospital complex last week were positive, twice as high as the statewide average; It was 26% at the hospital the previous week and 13% the week before that.

For good and bad, Stamford’s experience is emblematic of the latest phase of a pandemic entering its third calendar year: So far, the new omicron variant is both highly contagious, but showing signs of being less virulent.

Gov. Ned Lamont began the new year at the Stamford Health campus on Monday, joining Mayor Caroline Simmons and health officials in delivering an update on a surge that has badly stressed the health system here and across Connecticut.

Stamford Health had 68 COVID patients on Monday, seven of whom were in intensive care. They comprised 25% of the 267 patients at the 305-bed hospital. Of its 3,700 employees, 140 were out sick with COVID.

“Fortunately, they have low-level illness, and they’re coming back to work very quickly. And we have been able to augment our staffing with travelers, with per diem staff,” said Kathleen Silard, the hospital’s chief executive officer.

The impact has been on staff, many who work longer or extra shifts, but the hospital has not curtailed service to non-COVID patients, she said.

“We’ve been able to continue to do all the things we do every day. We deliver babies, we take care of patients with trauma, cancer, and heart attacks and strokes and elective surgery. That does not stop,” Silard said.

Statewide, according to numbers released later Monday, hospitalizations for COVID increased by 301 to 1,452 since Thursday, a stunning 25% jump. Hospitalizations now exceed the peak of 1,200 during the surge a year ago, but fall short of the 2,000 in the spring of 2020.

With one of the highest rates of vaccinations in the state, the experience in Stamford has exposed the limits and benefits of the vaccines: Inoculations cannot stop the spread, but they greatly mitigate its impact.

“I know people are scared, and are concerned with hearing about a new variant yet again,” said Dr. Manisha Juthani, the commissioner of public health. “The good news is if you’re vaccinated, and particularly if you were boosted, the majority of people are having mild symptoms. Some are even asymptomatic.”

The updated numbers showed that statewide the 68.8% were not fully vaccinated.

Lamont said the availability of vaccines and the willingness of people to get them mean that the continuing pandemic, while physically and emotionally exhausting, need not claim lives or jobs. 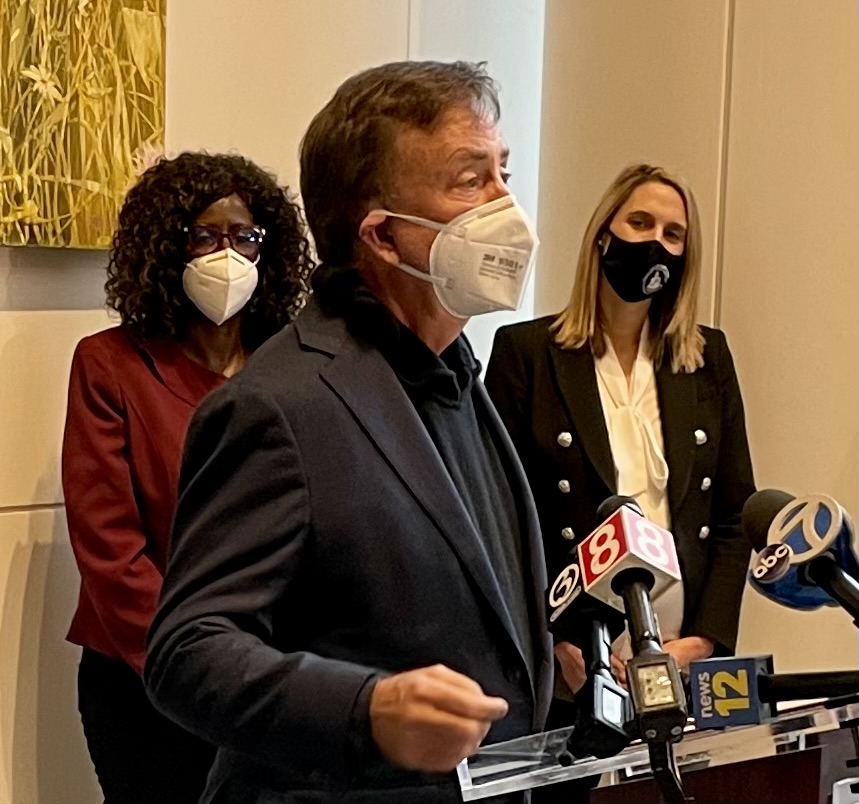 Gov. Ned Lamont said, “This is not 2020.” Behind him are state Sen. Patricia Billie Miller and Mayor Caroline Simmons.

Ninety-seven percent of residents in Stamford have had at least one COVID vaccination, second only to West Hartford, Simmons said.

“The unvaccinated have reason to be scared,” Juthani said. “For people who are vaccinated, we are looking at a better future.”

Juthani and Silard said mutations of the virus also may be helping: Over time, viruses tend to become more contagious, but less virulent.

“And that is what we are hoping with this virus, that we’re seeing more, but that is going to impact us a little less,” Silard said.

The experience here, in a hospital that serves lower Fairfield County and Westchester County, is likely a harbinger of what’s to come. State officials are nervously watching rising cases to the south in New York and New Jersey.

“We’ve seen throughout this pandemic, that generally what happens there eventually makes its way to us, which is why we really need people to do the things they know they can do right now, and those mitigation measures of wearing your mask, staying home as much as possible,” Juthani said. “If you are able to telework, I think that’s a good thing to do right now.”

Connecticut has a mask mandate in the schools. Whether to mandate masks in indoor public spaces, as recommended by health officials, is left up to local officials in the state. Simmons, the newly elected mayor, has issued a mask mandate.

Juthani was asked if it is time for a statewide order. Rather than answer, she looked to the governor and stepped away from the microphones. Lamont stepped forward and answered the question.

“I don’t think so,” the governor said. “I think overwhelmingly people in Connecticut are doing the right thing. They’re wearing the mask.”

Lamont, who has mandated vaccinations for state employees, teachers and health workers, said he wished to avoid the further politicization of public health measures.

“I don’t want to put a lot of counter pressures on and rebellion and people fighting back against it,” Lamont said. “I urge everybody wear the mask when you’re indoors. I’m getting N95 masks available to anybody, so no questions asked. I think we’re on the right track right now.”

The pandemic is both a political and public health challenge.

Lamont was overly aggressive last week, announcing the distribution of self-testing kits, then suffered an embarrassing delay when the shipment did not come through. Distribution began over the weekend, and Stamford’s mayor, a fellow Democrat and ally of the governor, was quick to offer praise.

“I just want to thank the incredible effort yesterday, where we distributed 20,000 at-home tests to Stanford residents. It was an efficient and smooth operation. I want to thank the governor for his leadership,” Simmons said.

U.S. Sen. Richard  Blumenthal, a Democrat who will be on the ballot this year with the governor, also emphasized what the Lamont administration delivered.

“The governor really deserves a lot of credit for stepping forward, aggressively seeking more tests and his tremendously important efforts need to be matched by the federal government,” Blumenthal said.

The Biden administration has promised 500 million tests by month’s end.

Sen. Tony Hwang, R-Fairfield, a member of the legislative committee that oversees the governor’s emergency pandemic orders and the only Republican elected official to speak, was more measured.

“I want to acknowledge the effort that we made to address testing and the increased capacity,” Hwang said. “I am here to offer my support to the governor and to the legislative branch.”