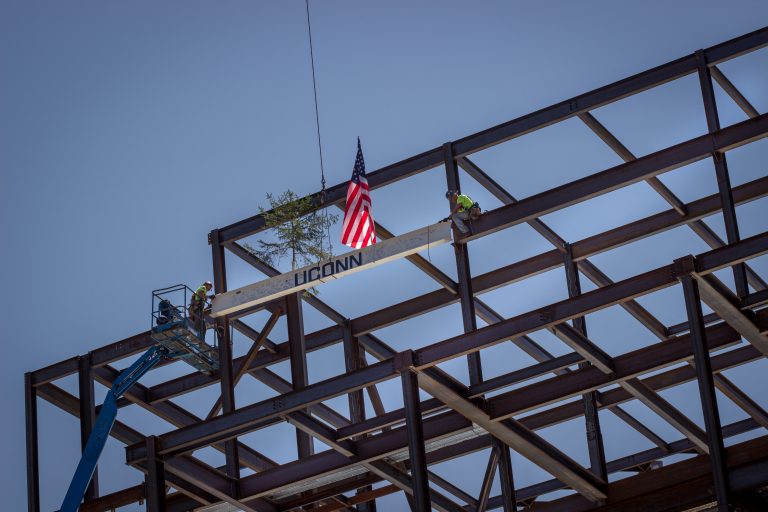 Constriction at the Engineering & Science Building at UConn Storrs campus

A commentary Dec. 31 in the CT Mirror by Keith Brothers, the Business Manager of the CT Laborers District Council and President of the Norwich-New London Building Trades Council, contained some valid points, but its main point that project labor agreements do not cost more money is widely known to be false.

To be clear I am sympathetic to the building trades and to some extent to union protections. My father was a building contractor and was in a carpenter’s union at one point in his life. I am not anti-union (although the unions are clearly a powerful special interest in politics that skews public policy in their favor – but that’s another topic).  Brothers points out positive things about PLAs such as giving workers careers rather than short-term jobs, better wages, benefits, health insurance, retirement plans for workers, safer job sites, apprenticeship requirements, and local hiring requirements.

He celebrates an award received for the $330 million PLA Waterbury Mixmaster highway construction project for finishing ahead of schedule and for quality management of traffic disruptions. He concludes by saying that “PLAs are a tool to ensure the hiring of Connecticut’s workforce, and that our local workforce has good labor protections for them and their families.”

Alas, if only he had stopped there I would have passed on by without writing. His op-ed submission was driven by a reaction to a Yankee Institute blog post (which I have not read) that apparently criticizes the better safety claim of PLAs and uses “the old and tired argument that PLAs raise the cost of construction.” I cannot speak to the safety records of PLA projects vs non-PLA projects, although I suspect it is a mixed bag.

But I can knowledgeably speak to the cost issue since Brothers mentions the University of Connecticut as one of the public agencies along with the Department of Administrative Services and local municipalities that have used PLAs presumably freely for the benefits to the projects and organizations. It is widely known in state government and much discussed at UConn among all management that had anything to do with construction projects that PLAs raised the cost of a project by somewhere around 10% or more. In fact, UConn actively tried to limit the use of PLAs within the limits of political viability e.g. what it could get away with before the unions complained to the governor’s office generating an unwanted backlash from the boss.

There has been and still is a management effort at UConn to free it from the costs created by regulations imposed by state government so that it can compete more cost-effectively with other universities. Such is the reality of an increasingly resource constrained environment in which we find ourselves.

The higher cost of PLAs is simply a fact. And the higher cost is just plain common sense. PLAs add extra benefits to those who work on these projects – ipso facto: higher costs. Better wages? Better retirement? Better health care? Obviously, logically, these result in higher costs. It always amazes me when people argue against higher cost even when they acknowledge the “good things” that are sought which usually include extra benefits.

Here’s a tip for Mr. Brothers: why not argue the merits? Yes, it costs more, but it’s worth it because of all of the reasons he mentions. It’s part of the blue state experience and trade off of living in a more advanced state. Don’t we all want a better quality of life for everyone?  These PLAs help bring that about. You could even correctly claim that it is not clear how much PLAs add to the cost (every case is different). But please don’t present falsehoods and claim that those who tell the truth (in this case) are actually the liars. Times are changing quickly and unfortunately union leadership such as Brothers (who I am sure is a decent man) are not changing with them.

Alan Calandro is a former Chief of Staff for administration and finance at UConn and the former Director of the General Assembly’s nonpartisan Office of Fiscal Analysis.