Callers who wanted to talk to a Department of Social Services worker by phone last month had to wait an average of 39 minutes and 29 seconds to do so. That’s down from one hour and 13 minutes in February.

Social service officials say it’s a sign that things have improved in the department’s call centers.

But there’s been little progress on another measure that client advocates say is critical: Close to two-thirds of callers hung up before getting through to a worker.

The accessibility of the call centers has been a key topic of dispute since they opened last summer as a way to centralize calls that would have otherwise gone to individual workers’ phones or voicemail boxes.

Clients and advocates have complained that it can take more than an hour to reach a worker by phone, and note that people often call with serious issues to resolve, such as being wrongly cut off from Medicaid or food stamps. They say DSS needs more workers to handle the volume.

“So many of the low-income people in our state are using cellphones that have a limited number of minutes per month, and that’s the piece that’s really relevant when it comes to wait times on a call center, because if you call and you’ve got limited minutes on your cellphone, you’re not going to sit around and wait on the phone,” said Deb Polun, director of government affairs and media relations for the Community Health Center Association of Connecticut.

But DSS officials maintain that the call volume will drop once clients become more accustomed to using self-service features available online and by phone that can address many questions without having to speak to a worker. And they say that the new phone system, while still in need of improvements, remains better than the system it replaced, in which many people never managed to get through to a worker.

DSS officials presented the March data during a meeting last week of the council that oversees the Medicaid program. 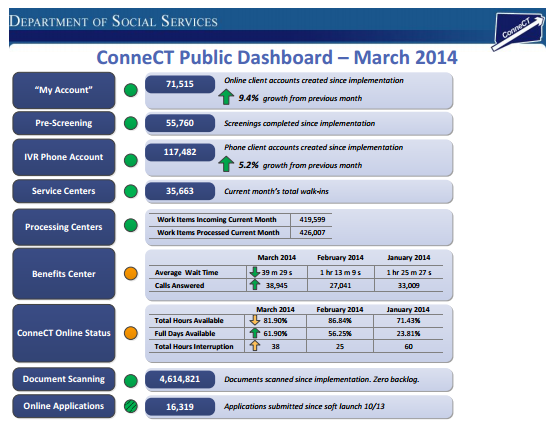 The Department of Social Services’ performance data for March.

While the call center wait time dropped, department workers answered more calls in March — 38,945 — than in the two previous months.

George Chamberlin, who runs the DSS benefits centers, acknowledged that there’s work to be done to bring down the wait times further.

“We don’t think we’re out of the woods yet,” he said, but added that the numbers show there have been improvements.

Some council members are skeptical.

Ellen Andrews, executive director of the Connecticut Health Policy Project, said she’s worried that any reduction in calls could reflect people deciding it’s impossible to reach a worker through the phone system and giving up.

Mary Alice Lee, a senior policy fellow at Connecticut Voices for Children, asked for data on what the wait times would be if those who hang up before reaching a person are taken out.

Among people who hung up before reaching a worker, the average wait time last Thursday was 15 minutes, Chamberlin said.

If that’s the case, Lee said, it means that people who stay on hold until reaching a worker wait much longer than 39 minutes.

Lee and others have also raised concerns about the number of callers who hang up before reaching a worker.

Last year, close to two-thirds of the more than 672,000 calls to DSS call centers from August through December ended with the caller hanging up before someone answered, according to data provided by the department last month.

This year, the number of dropped calls fell from more than 115,700 in January to about 66,700 in March, DSS spokesman David Dearborn said.

But based on those figures, nearly two-thirds of calls in March still ended with callers hanging up before speaking to a worker.

DSS officials have said that the abandoned call figures could be misleading because some people who are not agency clients call the system repeatedly to check how it’s working.

In a letter last month, Social Services Commissioner Roderick L. Bremby wrote that the system can’t identify why callers hang up before reaching a worker. In some cases, people might end the call because they don’t have their client ID number or needed documents with them, or they got their issues addressed or received another phone call while on hold.

Although not all abandoned calls represent people who chose not to wait, Bremby wrote that the number “still needs to be substantially reduced.”

The letter was written to the Rev. Bonita Grubbs, executive director of Christian Community Action Inc., in New Haven, one of several Medicaid council members who wrote to Bremby in December seeking data on call center wait times.

Bremby wrote that the agency has taken a number of steps to reduce the wait times and number of abandoned calls. A system message that previously told callers when the wait time might exceed 20 minutes was updated to tell people about 60-minute wait times. If wait times are less than an hour, callers will hear a message with the current wait time, he wrote. “This update will be especially helpful to callers with limited cell phone minutes,” he wrote.

The department also set up an “escalation unit” late last month to address urgent client concerns. It was established following complaints by people who work at social service agencies, community health centers and other organizations, saying the new DSS system had eliminated back-channel methods they had used to reach workers in emergencies.

Polun and others have suggested that DSS consider a phone system that would take a person’s phone number and offer to call the person back when a worker is available to help, something many private sector companies do.

Bremby said the department has been exploring that option.

DSS officials have also noted that many people can now access information through an automated portion of the phone system without having to wait to speak to a worker. As of last month, 117,482 people had created accounts through the phone system to do so. In addition, 71,515 people have created online accounts.