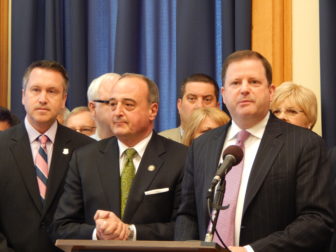 But while the GOP plan also offers tax modest relief for consumers, businesses and retirees, it raises $120 million in taxes on working poor families and scraps $45 million in new assistance for the merged public college system.

“This is an honest approach that eliminates the ugly gimmicks and ‘techniques’ that have been employed (by Malloy and the Democratic majority) to balance the budget only on paper,” said House Minority Leader Lawrence F. Cafero, R-Norwalk.

“Reversing the negative impact of years of gimmick-filled tax-and-spend budgets passed by the Democrats won’t happen overnight,” added Senate Minority Leader John P. McKinney, R-Fairfield. “But we have to start somewhere. This is a responsible step in that direction.”

Republicans, who hold 54 of 151 seats in the House and 14 of 36 in the Senate, recommended an $18.98 billion budget for the fiscal year that begins July 1, a plan that spends $54 million less than Malloy proposed in February.

The Republican plan is largely a public statement, and most or all of those components are expected to be dismissed by majority Democrats as they negotiate a final budget with the Malloy administration before the 2014 General Assembly session ends May 7.

The GOP budget doesn’t change many of the programs prioritized in the governor’s budget.

Instead it focuses on weeding out borrowing, specialized funds raids and other gimmicks Malloy and his fellow Democrats in the legislature have offered to push hundreds of millions of dollars on expenses off until after the 2014 state elections.

The legislature’s nonpartisan Office of Fiscal Analysis estimated last month that the governor’s plan for 2014-15, if adopted, would leave the state with a built-in operating deficit of $1 billion in the first new state budget after the election.

Still, Republicans said their plan begins to undo some of that potential fiscal mess now by tackling problems Malloy and his fellow Democrats have ducked, including:

Republicans noted their plan does more than not worsen the $1 billion post-election deficit: It whittles it down, slightly, to about $905 million.

“We sent a hard-driving message,” said Rep. Pamela Z. Sawyer, R-Bolton, a 22-year veteran of the House. “We need to have a budget that does not cost us more” after the election.

Republicans argued it was unfair to give teachers alone a tax break and they suggested modest relief for all retired workers.

The GOP proposed several small tax cuts when the legislative session began in February, and those proposals were included in their budget:

The GOP would also eliminate the administration’s option to launch keno gaming in hundreds of Connecticut restaurants and bars this year. That launch would be worth an estimated $13.5 million to the next state budget, but it has sparked a firestorm of criticism among anti-gambling forces.

To help pay for all of this, the Republicans would eliminate the Earned Income Tax Credit (EITC), which was created in 2011 to help Connecticut’s poorest working families save money. This would amount to a $121 million tax hike on these families – a move the administration and Democratic legislative leaders quickly decried.

“After months of grandstanding, Republicans in the legislature have once again failed to produce an actual budget proposal, instead choosing to issue a political document that’s heavy on rhetoric, but devoid of any actual detail,” Malloy’s budget chief, Office of Policy and Management Secretary Benjamin Barnes, said.

He called the EITC cut “most troubling,” noting that former President Ronald Reagan, one of the GOP’s most popular figures of the last 50 years, called it “‘the best antipoverty, the best pro-family, the best job creation measure to come out of Congress.’”

Republicans also cut $60 million Malloy proposal to boost funding for the Connecticut state universities and community colleges. But the governor’s plan used a loophole to fund that initiative outside of the constitutional spending cap.

House Speaker J. Brendan Sharkey, D-Hamden, said Thursday’s plan “is typical Republican fare – targets the poor and middle class and claims illusory spending cuts. The reality is that the legislature and the governor have put together a budget that’s balanced, pays down debt, saves for the future and puts some money back in the pockets of hard-working families.”