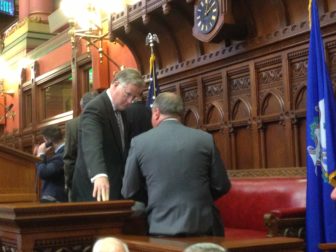 It was a stunningly swift cycle of gaffe, controversy and apology in the Internet age: An adjunct professor insults Republicans on Monday, only to find his words recorded and posted online, drawing a denunciation from the floor of the state House of Representatives on Tuesday.

Just an hour after he was denounced by the House GOP leader, Brent Terry apologized for critical comments he made about Republicans and conservatives during a creative writing class at Eastern Connecticut State University, where he warned that a GOP takeover of the U.S. Senate could threaten universities such as Eastern.

“During my creative writing class yesterday, I allowed my own political opinions to color the discussion. I regret the language I used, and I apologize to any students in the room who were offended,” Terry said in a statement distributed by the school. “As a liberal arts university, Eastern is known for encouraging debate and discussion about a host of social and political issues.

“My role in my own classroom is to keep the debate lively yet respectful. I did not meet that standard yesterday, and for that I am truly sorry.”

A four-minute audio of Terry’s comments, presumably made secretly by a student, were posted on a website Tuesday.

“Because this election, it’s absolutely possible that the Republicans will take over the Senate as well as the House,” Terry says on the audio. “And we will live in a very, very, very different kind of country if that happens. I mean, colleges will start closing up if they, if this people have their way. They don’t think money should go to giving you people dangerous ideas about how the world should be run.”

The audio begins in midsentence, Terry referring to “racist, misogynist, money-grubbing people” who do not want blacks, Latinos, the old or the young to vote.

Cafero spoke about Terry as a point of personal privilege with the permission of the House Democratic majority. He was applauded from both sides of the aisle after he spoke.

“I am a firm believer in academic freedom. I am a firm believer that professors should have that freedom to express their views to their students,” Cafero said. But Terry’s comments to the students in a creative writing class crossed a line, he said.

“I find it offensive as a Republican, as a parent and frankly as a citizen of the state of Connecticut that we would have in our public university a professor who would make such a comment,” Cafero said.

Elsa Nunez, the president of the university, said after listening to the audio that she tended to agree.

“I was extremely, extremely disappointed when I heard the tape,” Nunez said. Professors should feel free to express themselves without fear of retaliation, but they have a responsibility to offer perspective and create an environment where students feel comfortable to disagree, she said. “I am personally concerned when only one perspective is presented in a classroom.”