A move to curb $100,000 pensions for brief judicial careers 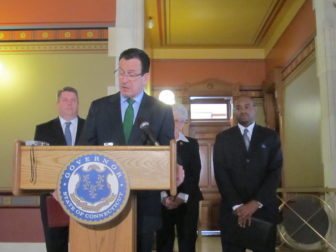 Gov. Dannel P. Malloy with his most recent judicial nominees to the Appellate Court, Eliot Prescott and Raheem Mullins. The latter is Malloy's youngest appointee.

The General Assembly is expected by week’s end to confirm the nominations of Anthony V. Avallone and Timothy D. Bates as judges of the Superior Court, putting the 66-year-old lawyers on two of the shortest paths ever taken by a public employee to an annual pension of more than $100,000.

Once confirmed, they will become the second and third appointees of Gov. Dannel P. Malloy to start their judicial careers at age 66, entitling them to collect full pensions once they reach the mandatory retirement age of 70. The first was Maurice B. Mosley, a former legislator named to the bench a year ago.

They may be among the last: The prospect of six-figure pensions for three-plus years of service has prompted one Democratic senator and two Republicans to separately propose reducing the pensions of judges who serve less than 10 years. The changes would be prospective, applying only to future nominees.

Sen. Dante Bartolomeo, D-Meriden, was the first to file an amendment changing the retirement rules that now allow judges a full pension at the maximum retirement age of 70, regardless of whether they have served 10 years, 10 months, 10 days or 10 minutes.

She said she was unwilling to change the pension rules for the current nominees, but she intends to vote against their confirmations, the first of which could come before the Senate as early as Thursday afternoon.

Avallone and Bates are among 16 Superior Court nominees awaiting confirmation after their nominations in February. Four would qualify for maximum pensions after fewer than 10 years of service. The other two are Irene P. Jacobs and Steven Spellman, both 62.

In all, 10 of the 38 Superior Court nominations made by Malloy since he took office in January 2011 went to lawyers age 61 or older. The oldest was Mosley, a former Democratic legislator from Waterbury, who turned 67 four months after his nomination. Avallone turns 67 in December, Bates turned 66 two weeks ago.

Mosley’s age drew little notice last year, nor did the ages of the others who will qualify for pensions after less than 10 years of service. But Avallone’s higher political profile seemed to generate more attention.

Avallone is a Democratic National Committee member with a lobbying and law practice in Connecticut. He was a state senator from New Haven who was co-chairman of the legislature’s Judiciary Committee.

Leeland Cole-Chu, Kenneth B. Povodator and Charles T. Lee were 63 when appointed. Maureen M. Murphy and Shelley A. Marcus were 61.

Of Malloy’s other Superior Court picks, 17 were between the ages of 50 and 60, 10 were between 40 and 49, and one was 33. His youngest appointee was Raheem L. Mullins, an assistant attorney general named to the Superior Court in January 2012 and nominated in March to the Appellate Court.

By state law, a full judicial pension is two-thirds of final salary, now $154,559 for a Superior Court judge. The salaries are due to increase by 5 percent next year, meaning that the latest crop of nominees can expect pensions of at least $106,000.

It’s unclear if the changes proposed by Bartolomeo and the two Republicans as amendments to unrelated bills will come to a vote. Senate President Donald E. Williams Jr., D-Brooklyn, and Senate Majority Leader Martin Looney, D-New Haven, were noncommittal.

“Not sure,” Williams said. “It absolutely ought to be looked at. Whether it’s going to be this late in the session, I’m not sure.”

Rep. Gerald M. Fox III, D-Stamford, co-chairman of the Judiciary Committee, said he saw no argument against reducing pensions for less than 10 years of service.

Malloy deferred the pension question to the legislature, but he defended his right to nominate lawyers in their 60s to the bench. His chief of staff, Mark Ojakian, said it would be discriminatory to rule out a nominee on the basis of age.

“Pensions are an issue for the legislature when it comes to the judiciary,” Malloy said. “I can assure you that when I spoke to nominees, I asked them how long they plan on working.”

Under the state constitution, judges must retire no later than age 70, but they can keep working as trial referees, essentially presiding over trial as judges, in return for a per diem payment. Malloy suggested that Connecticut reconsider the maximum retirement age of 70, which he called outmoded.

The judicial nominations have been held up, but not over pensions.

Knowing that Republicans were angry at the Malloy administration for not considering more GOP picks for the bench, the legislature’s leaders delayed the confirmation votes, hoping to avoid a filibuster.

Without offering details, both said the conversations went well.