A 15-year legal and political odyssey neared an end Friday with the announcement of a complicated $8.1 million financing plan to purchase and manage “The Preserve,” a 1,000-acre swath of Old Saybrook, Essex and Westbrook that is the last, large, unprotected coastal forest between Boston and New York.

Joined by local officials and nonprofit environmental groups that have worked to safeguard the open space, Gov. Dannel P. Malloy said he is asking the legislature to authorize $1.9 million in state bonding as part of the state’s $3.3 million contribution to buy the land, most of which is in Old Saybrook.

The Trust for Public Land reached an agreement last summer on a purchase price with River Sound Development, a subsidiary of the bankrupt Lehman Brothers that once planned a golf course and more than 200 homes on woodlands that form watersheds for the Oyster River, Mud River and Trout Brook, which all drain into Long Island Sound.

The Preserve has 38 vernal pools, 114 acres of wetlands, a cedar swamp and coastal forest with a dense canopy that provides a resting place to migratory birds. More than 100 species of mammals, reptiles, amphibians and birds are found there. The open land acts as a sponge during storms, mitigating runoff into rivers, streams and the Sound.

Malloy said the open space is key to protecting water quality, preserving crucial habitat for migratory birds and other wildlife, as well as providing hiking opportunities in the relatively densely settled Northeast.

“Let me say it this way: I don’t know of any other land acquisition that is higher ranked in importance across the state than this particular action we are taking today,” Malloy said.

Malloy credited Alicia Sullivan of the Trust for Public Land for reaching an agreement to purchase the land at an affordable price.

“Our mission is to protect land for people, and I can’t think of a better example of protecting land for all the people who live in Connecticut and visit here,” she said.

Voters in Old Saybrook will vote in June on a referendum to approve its share of funding. Of the 1,000 acres, 926 are in Old Saybrook, 71 are in Essex and 4 are in Westbrook. Carl Fortuna, the Republican first selectman of Old Saybrook, thanked the Democratic governor and said open-space preservation was not a partisan issue.

“An opportunity like this comes along once in a generation,” said Don Strait, president of Connecticut Fund for the Environment.

In addition to the $1.9 million in state bonding, the state will use $1.4 million in federal funds for the purchase. State funding may increase through a grant to the Essex Land Trust, which has a grant application pending for matching funds to buy 77 acres in Essex.

The state will be an owner of the land. 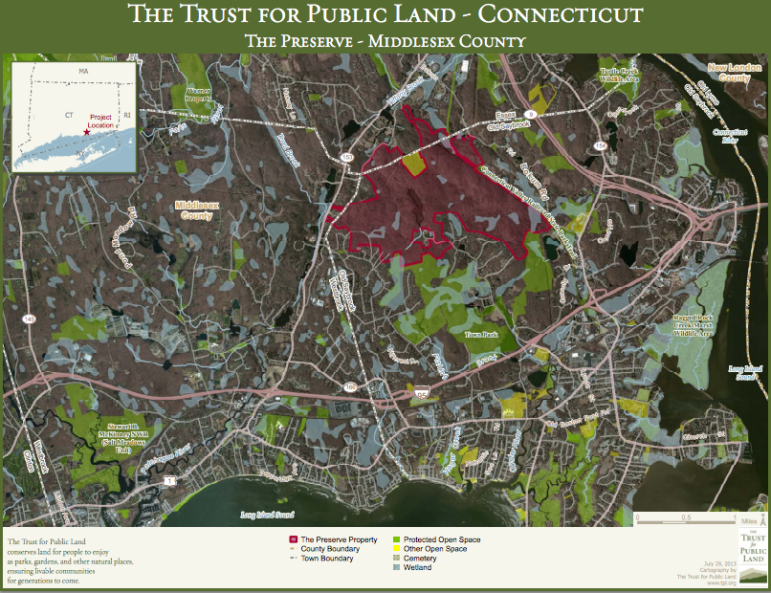